After the self inflicted trials and tribulations of Florida at the BSF convention, which went very well, I find myself back in Japan for a short trip. For some reason, perhaps its the combination of great people, sun and alcohol, I always enjoy my visits to florida. My demo tree was a great buttonwood, literati style. As always no pics. No decent ones anyway. What a terrible bonsai artist I am to not do that. I ended up buying it in the auction because I liked it so much and well it was ridiculously cheap. The one thing about conventions I dislike is the auctioning off of material after the demos, they never go for anything near their true worth and so I didnt want to let this get away. I set myself a limit and the tree came in spot on. Many people thought I would be taking it home with me, but apart from the illegality of it all, buttonwoods like heat and sunshine. Two things that the UK tends to lack. Instead it now has a home at my good friend Michael Fedducia's bonsai nursery in Plant City. He will look after it and do what is necessary. I will visit when I am there next and maybe one day put it in a show when I am judging and win first prize.

The throbbing crowd before my second demo. It soon filled up mind.

The exhibition itself was very pleasing to see...it showed off a lot of styles of bonsai from traditional Japanese, to American and Chinese penjing influenced. Even had a bit of asobi kokoro in there too. Here are some pics. 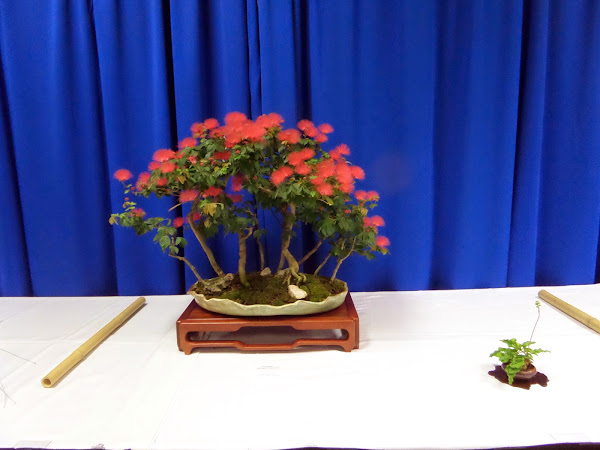 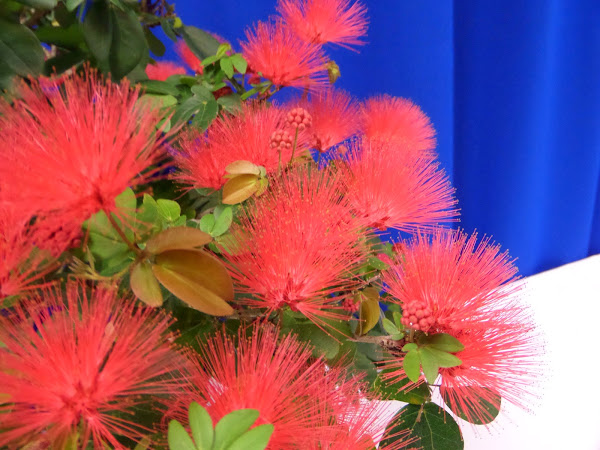 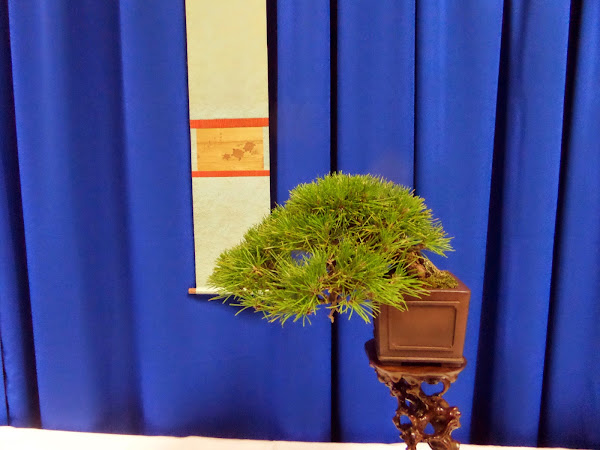 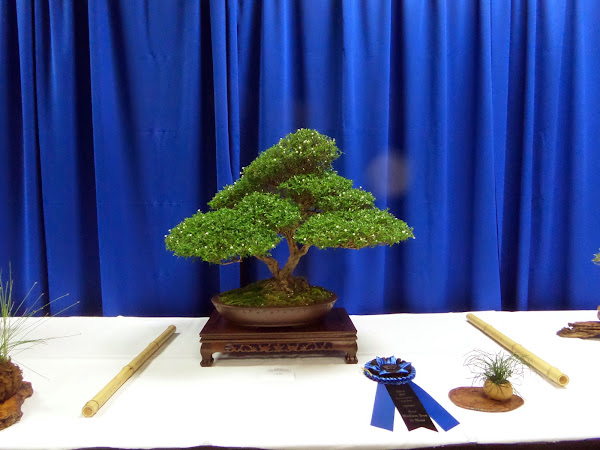 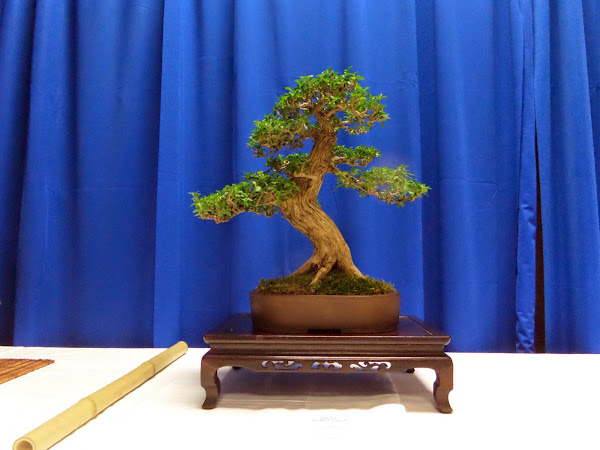 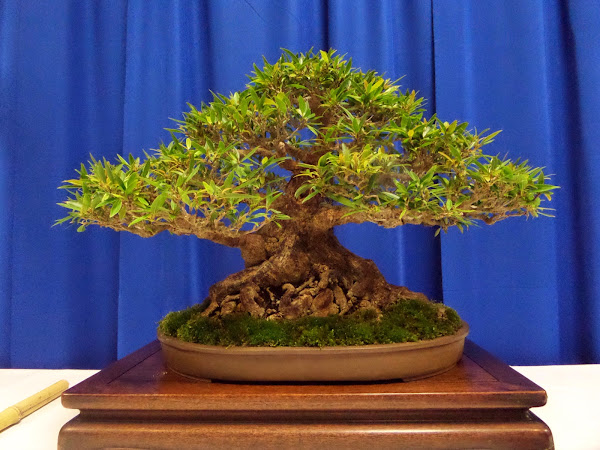 Both the above trees are in very nice pots by Japanese potter Shuzan. I was pretty impressed to see them. Without wishing to sound boastful, to the untrained eye, they may not look anything different, but looking at the tsuchi me or the clay quality/consistency, it becomes apparent. Nice patina and well matched to the trees...and before you ask, no I did not sell them. 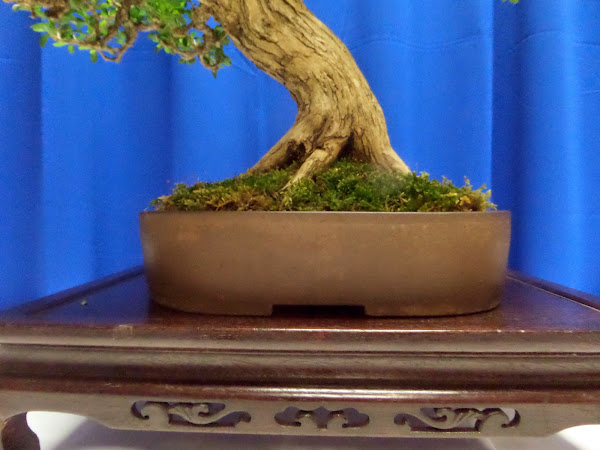 Although I wish I had done...mmmm. 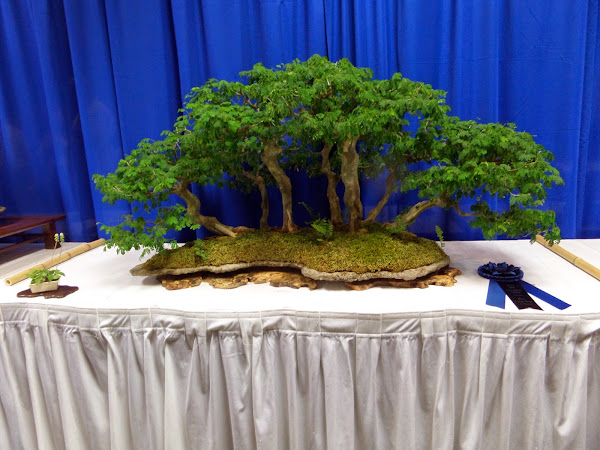 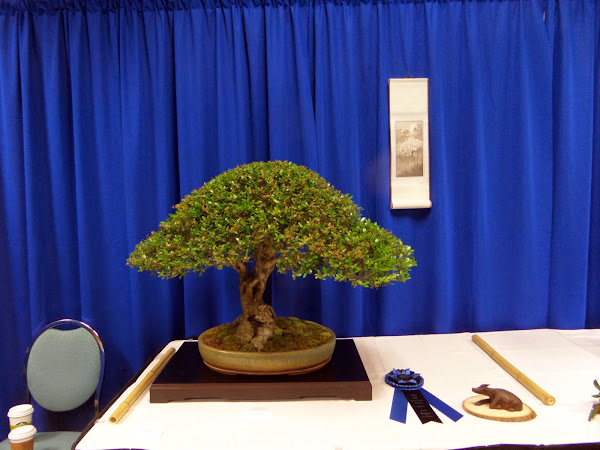 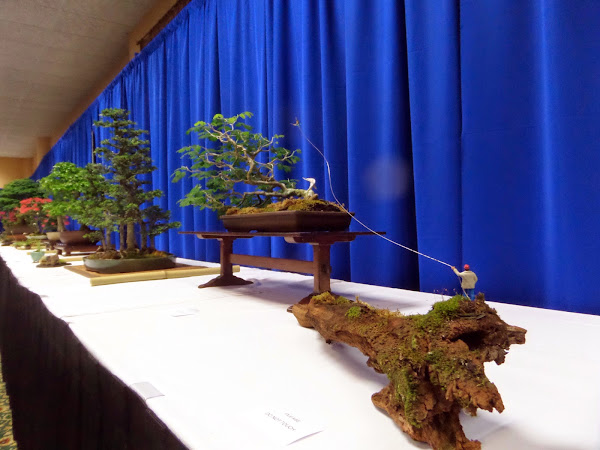 This display featuring a little figurine flying a kite next to a windswept tree was evidence of the asobi kokoro that can be all do often missing from the uptight and rule obssessed world we live in. If all tres were like this it would be kitsch and ridiculous, but every now and again, it is necessary to have an amuse bouche to refresh the soul.

After a short trip at home including a seriously jet lagged appearance at Sutton Club, it was to Japan to tie up some business from February and also look for some new stuff. Plenty of pot orders which are as yet unfulfilled but have managed to find some trees for clients that will be shipped in the winter/next spring.

Akiyama and I drove for over 2000km and visited a lot of places. One thing that became apparent is a lack of good trees and stuff to buy. Akiyama has been disappointed as have I too a certain extent. I have made a few purchases including a yamadori kifu sized juniper which is very raw. It will stay at Akiyamas for two years while it grows out (again, they tend to do that better in Japan) while it gets its plant passport and then I will import it in the future...unless I make it here and enter it into Kokufu for somebody. 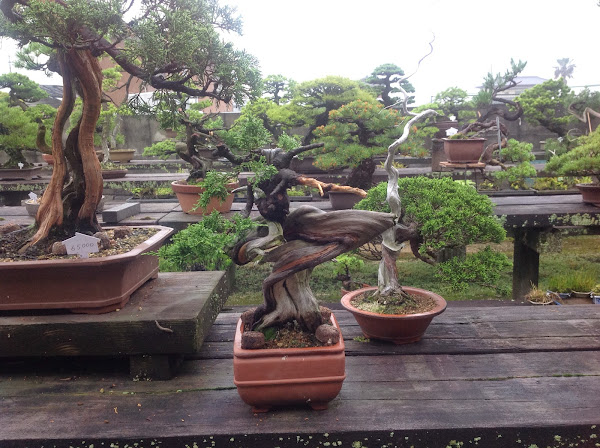 Either way it was a great tree to find and Akiyama would have snapped it up if I didn't. 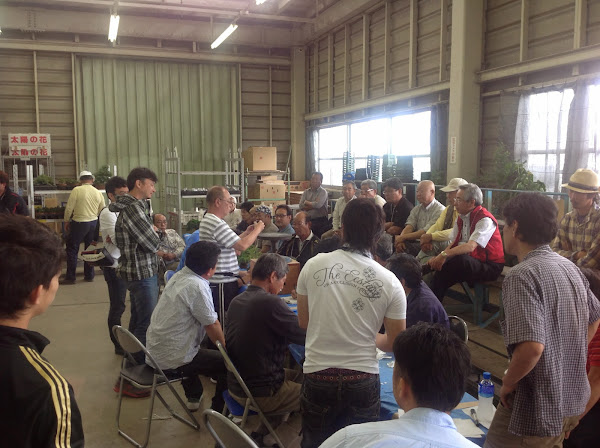 The trip was planned to coincide with an auction down in Kumamoto. As always, there was fun and games and I managed to pick up some cheap pots. One of the brokers brought a lot of clients stuff which was on a no reserve type deal, so went to the highest bidder. There were a few chuhin and larger nakawatari chinese pots that I bought for much less than I thought, so expect to see those for sale at some point on my soon to be redone website. The guy in the white T-shirt in the foreground is the recently returned Moriyama-kun, son of Mr. Moriyama (unsurprisingly) and he has just finished his apprenticeship under Mr. Kimura. Ryan Neil was his senpai for a number of years and talks fondly of him (on the whole). He was busy wiring away when we got there, and there were a number of trees in the nursery which had his touch on them. I hope in the future he will become well known, but he is a shy kid so who knows. 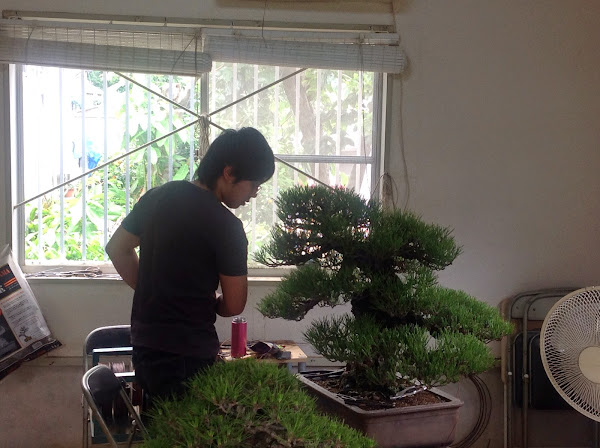 It was a learning experience as well for both of us. Akiyama was giving a lot of thought to business operations and nursery size so he compared nurseries and the way they worked. There is always some new technique or nugget of knowledge to gain. One thing I realised yet again is that all the healthiest trees and those which looked the best were one which were repotted infrequently and when they were, the core root ball was left relatively untouched. Over the last few years I have been repotting less, often due to inability to get it done, but I have noticed an increase in health. 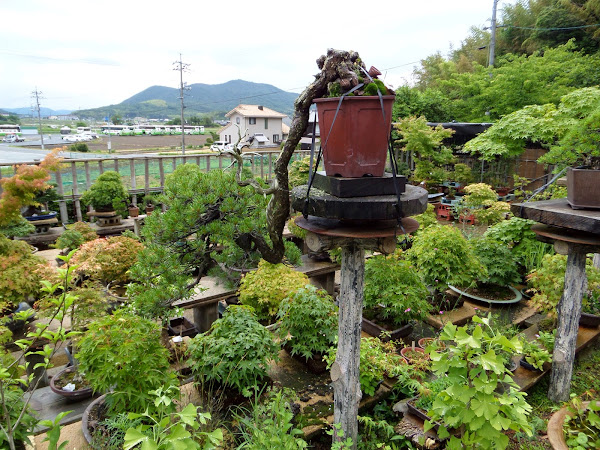 A white pine, 20 odd years in the same pot and soil. "It is still geowing well so I didnt see the point...now I can't get it out of the pot!" joked Miyao-san, the owner of the garden. 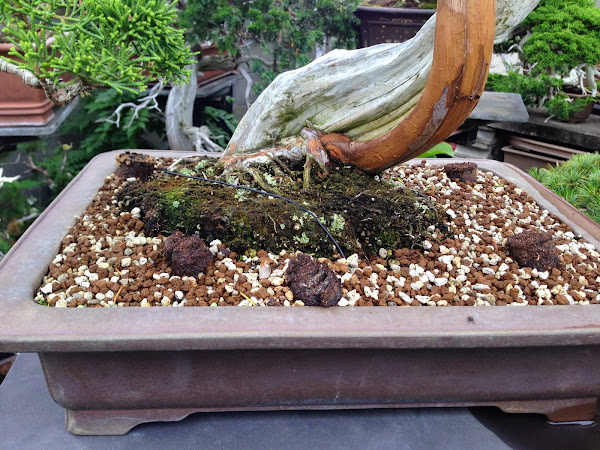 The central root ball is left relatively untouched. As long as water can penetrate and the tree is healthy, leave it alone. 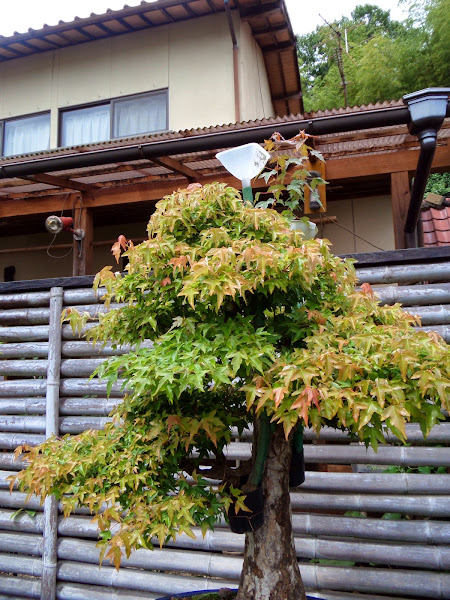 Miyao-san was also the dude who put funnels/radio antenna on his trees to collect water for the pots of the whips that are being used for approach grafting. 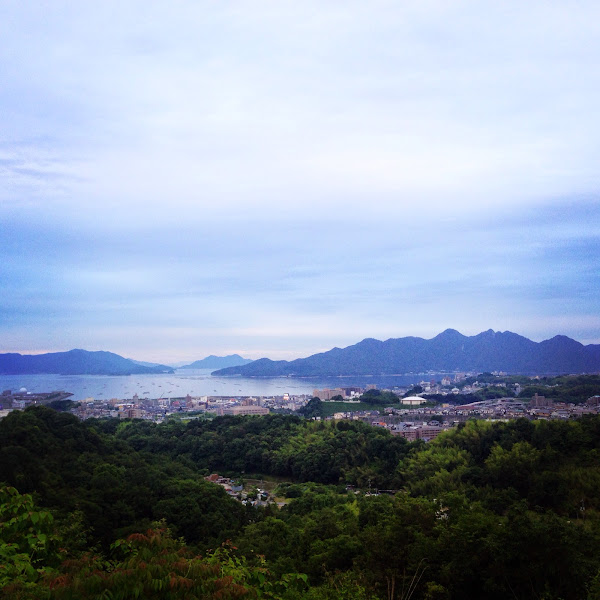 Didn't get much chance of sight seeing, but what is new there...this was the view from a service area near Miyajima, Hiroshima. Some of the drive was breathtaking, especially the Shin Meishin expressway which I drove because Akiyama hates the heights. It winds itself through the mountains sometimes several hundred feet above ground level. No pictures except for this...a very confused car navi 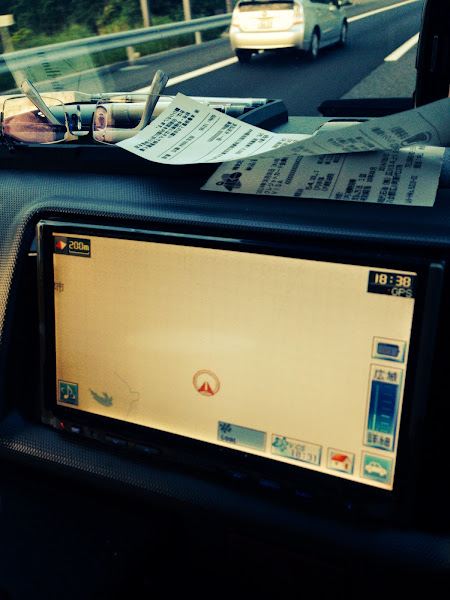 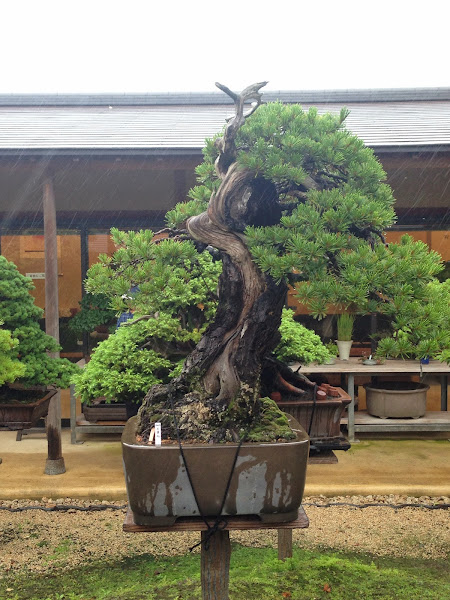 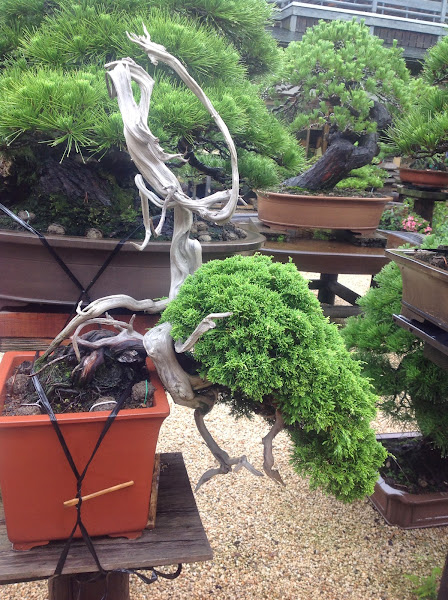 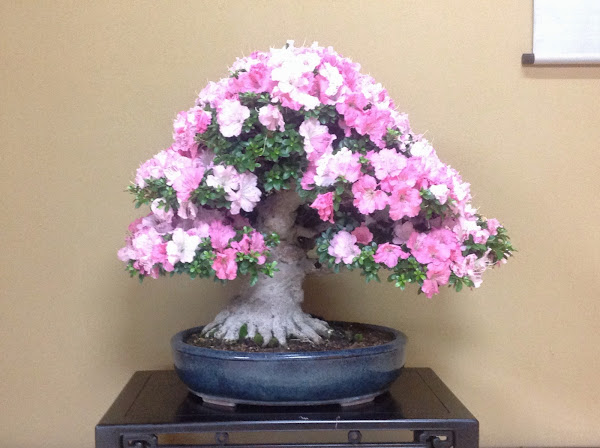 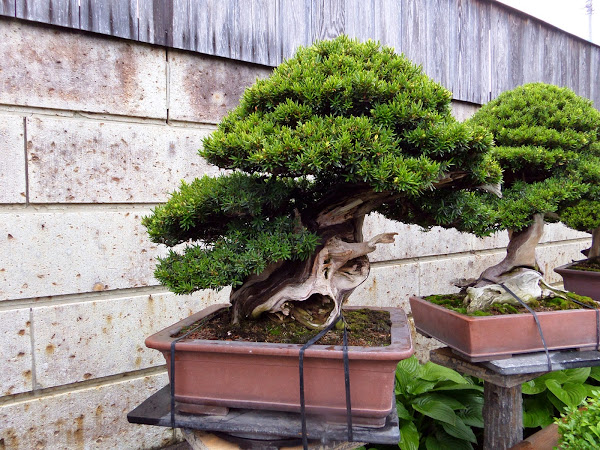