Once again it has been a while, but there you go. I have been mostly busy with work, here and there, did some more work in Poland. I have pictures somewhere when I get around to it...and now I am in the US. I have been working on Azaleas at a large collection, if not the largest collection outside of the motherland and it is a difficult task to get through them all. The work at this time of year is corrective wiring and pruning back vigorous shoots, thinning out the new growth since the summer pruning.
Due to the sheer number of trees here and the fact that there are only 24 hours in a day, I have had to modify normal techniques to fit with the client's situation and try to use a less labour intensive styling method. By that I mean no fine wiring. With Azaleas however with patience, long range planning and superb horticultural care then this is possible. I have the first two, the client provides the third. Since I begun to thin them out and they were repotted in the spring, they have responded very well and we are succeeding in keeping them in shape with mainly scissors alone. For many trees the styling has been done in stages so as to keep the tree from stalling. One common problem with azaleas and bonsai in general is that too much gets done at once and the tree cannot recover, so like an engine with a faulty clutch, it stalls. Ideally the engine should always tick over at fairly high revs, so even if you know a branch needs to be cut off, if it needs hitting back hard, then do it in stages, cut half back, wait for back budding, let them harden a little, then cut back and you get even more branching. That way in two years you have a finished branch structure whereas cutting back hard initially would cause a stall and you end up stationary.

Make sense? If not then apologies. It does in my head at 5 am.

Anyways, I saw this post on the interweb where Satsuki are described as kitsch and almost always styled as Pine Bonsai. (Note to all, this is not in any way an attack on the author, just a comment in general) Now, regular readers will know of my love hate relationship with Azaleas but they are very very misunderstood from a western perspective. It is a shame to see that people do not have the same, albeit a strange and slightly trainspotteresque appreciation of them as they do in Japan. The fact that they are just called "Satsuki" and all lumped together when in fact there are over 800 varieties used in Bonsai, each with their own special traits and growth habits shows a lack of understanding...but the same culture and mentality doesn't exist in the West (thankfully in some ways) so I guess I am barking up the wrong tree...speaking of which...this is an azalea styled like a pine 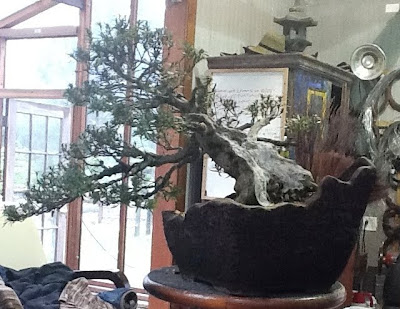 Apologies for the photo, it was taken by me, using an ipad...not exactly fit for purpose and the ipad has a terrible camera. Plus I was in the middle of a days work which is more important.
This is a Kinsai which was half dead so when I repotted earlier in the year , I ripped all the dead wood off it, changed the planting angle, put it into a John Pitt pot and reduced the number of branches. Most of them are unhealthy and may possibly die and so not much effort has gone into it thus far. I pruned it back a little more this time, did a little deadwood work and wired a few branches but no more than an hour spent on it. It recovered well and looks ok, but once a tree has started to die back, then on most varieties, it is a question of time. Kinsai is borderline, if the tree is healthy then it can survive with deadwood, if not so vigorous then the rot has gone deep. I am still hedging my bets.
The wood was cleaned up and treated with wood hardener and lime sulphur but the work on it is all natural. It is pretty cool actually and the best dead wood I have seen on an azalea. I hope it survives. Still, a few years enjoyment is better than none....but it is contrived and styled like a pine so I guess there is no value to it whatsoever?
Last day here and then I am off to Alabama for the weekend. Looking forwards to it....always fun in the south....kind of like the north in England.
Posted by Peter Warren at 10:20