At 36,000 ft. the trip across the US doesn't seem so bad. On my way home after a long and eventful four weeks in America, and in four and a half hours I am covering the same distance as 3 days of non stop trucking...

The lack of updates has been due to a combination of tiredness, work to do and the European Championships. Been some cracking games so far, lets hope we don't crash out in a John Terry fuelled ball of fire. Spending time at International Bonsai Mirai, the garden of Ryan Neil, it is at times overwhelming, both the amount and quality of material he has and how much he has been able to achieve in two and a half years. As a contemporary and friend it is difficult to not draw comparisons, we all suffer from tree jealousy and ego problems no matter how hard we try and restrain or justify it. Thankfully the pair of us have different skill sets and also different but similar visions of bonsai and how it should be done, so comparisons are a bit like apples and oranges...plus we are both relatively happy with the paths we are walking.

Over the last five days and also during the more lucid conversations in the truck, a great number of ideas and bits of information were shared and discussed. One great learning experience for me was to be forced to work outside the comfort zone a little and style a tree for Ryan. He had been telling me he had a tree he wanted me to style for him for some time and kept dropping the idea. I had done it a year or so ago with a little literati spruce which i worked on again this time. It seemed a very alien and to be honest quite frightening idea...to style a tree for another professional, especially a collected piece for one of arguable the most talented and knowledgable yamadori artists around. Opening up the potential for criticism, for faliure and for ruining a valuable tree is difficult enough for a client, but the stakes are raised even further in this situation. Still it was time to go big or go home and it was done to the best of my abilities...but with a great amount of caution used...despite Ryan's comments to have at it. 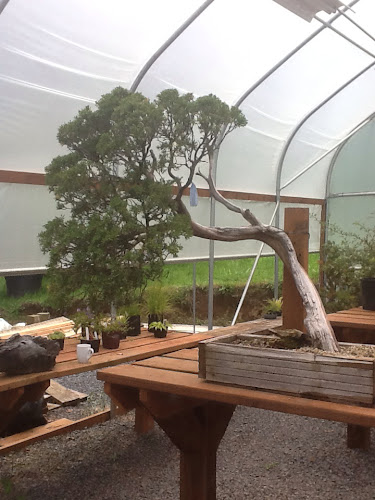 Having never really worked with Rocky Mountain Junipers on a massive scale I took great care in the approach. Maintaining a large foliage mass is essential with all junipers and there were a number of branches with internal growth that I would normally have cut back to, but by the end I had removed around 40% of the foliage and so that was bordering on the limit of pruning. The foliage was left on the end of the branches to become photosynthetic energy generation area which would create the resources to generate new foliage growth inside the tree. As the tree would need to be transplanted next year, there is a need for foliage to create the energy to grow roots.

The RMJ has been getting a bad press for a long time, recently it has been taking some flak from certain people with very strong ulterior motives but it is clear to see with the trees that were in the 3rd national show that given a few years and the correct techniques and care, the foliage does turn mature and become compact almost to the point of looking like the holy grail, Itoigawa. Rather than slander the RMJ in the US or Sabina in Europe as a difficult and unworkable tree, there needs to be a major change in the way people approach styling, because the demonstration style "image in a day" hasn't worked at all. Maintaining as high a foliage mass as possible whilst pushing the tree in the correct direction is important, not cutting back to a bare skeleton structure with next to no foliage and expecting it to grow out.

Stood up, wired and initially styled. The sacrificial branch at the front is tied up and will be used to maintain balance and for energy production. Yes i know it is a terrible picture...what do you expect from me? There will be better pictures in the future.

Ryan seemed happy with the final tree and was generous enough to say that he would not have styled it that way. I took it as a compliment. I thought it a very brave and humble move for him to have trees styled by other artists in his garden, but he said that it was necessary to have those trees as it opens his horizons and stops him falling in a rut. It certainly helped me to do the same by styling it and I am looking forward to him repaying the favour when he comes in January.

Much of the conversations during the trip centred around the upcoming Artisans Cup of Portland, the bonsai exhibition that will be held in the Museum of Modern Art in October of 2013. It promises to be an amazing event and it will take bonsai to a new realm, a different audience and I am very excited about this. Different display methods and new ideas are to be encouraged and thinking outside the box will be a big part of the show. American Bonsai will hopefully come out the otherside with a strong voice and identity. It is an interesting and exciting time to be involved with bonsai and there is great anticipation. On a personal level, it has given me the kick up the backside that I needed to do similar things in the UK. Having had a few opportunities which I didnt pursue, I have nobody to blame but myself. Ideas are forthcoming but the resources to back them up are not so enthusiasm slowly wanes. Like Ryan who is dipping very deeply into his own pockets to fund the show, I need to go big or go home...

Anyways, here are some shots from around the garden. Nothing much as he is making a new website, lots of pictures will be available there, so no spoiler shots here. 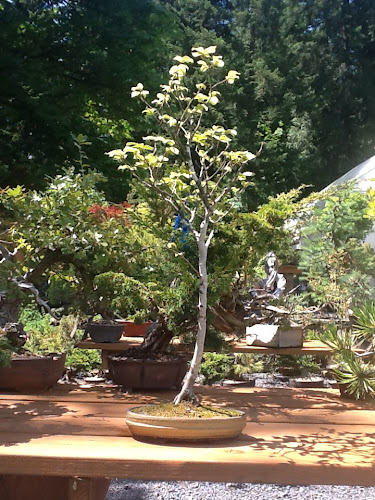 This, rather strangely, was one of my favourite trees in the garden. A 25 year old container grown beech that looked so natural and had the greatest sense of mochi-komi which is impossible to recreate. An outstanding little tree.

I had a good time hanging out with the boys...Ryan has two full time apprentices now, both great guys who are at the start of a long journey. It reminded me of the age of innocence. So much to learn and look forward to... 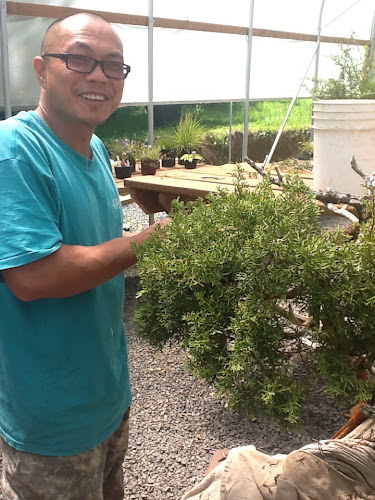 Tom is from Tennessee via the Army and California... 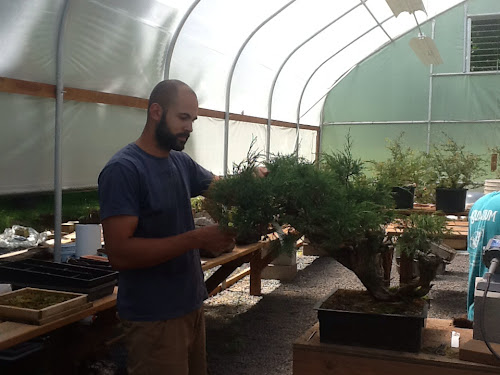 JP is from Paris and is a quiet, sensitive soul. He is balding and bearded...kind of sounds familiar.

Both rather amusingly are massive Shohin enthusiasts...I wonder if that will last.

I will be back in the UK for a while, got my corner of England to sort out. Apparently there is a cat sized slug attacking the vegetable patch although methinks the lady doth protest too much. There are some workshops up at Willowbog at the end of the month and I will also be doing some private work around the country. Once the garden is up and running a little, some more pictures will be up and I will start to work on my own trees for once.