Autumnal Movements in the Dark

Its been a while since the last post (tm) , and rather than globe trotting, I have been in the UK for most of October, enjoying what can only be described as Great British Weather. Autumn is here and like the other great British institution, the BBC, it is hanging on to the last remnants of faded glory and respectability.

A very enjoyable trip to Norn Iron was had, full details and more video, pictures and details than you can shake a stick at can be found courtesy of Mr. Eejit, the inimitable Ian Young. I must say that advertising such as that is very flattering and it is the sort of thing that cannot be bought...so thank you. It was an eye opening trip, seeing what I can only describe as some of the best individually grown deciduous trees in the UK. The general standard was good despite the paucity of professional input until recent years (or perhaps because of it?). The Willowbog influence was apparent and its clear that the internet has helped dramatically. The enthusiasm and desire to learn was refreshing, I look forward to my next trip there...assuming I get the invite.

As I said, the deciduous trees impressed me most and now is the time of year to be focusing on deciduous species. Pruning back and thinning out should be done once the leaves have finished and are starting to drop. After that we have around two weeks to do it before they begin to bleed like stuck pigs. The last couple of days have been heavily deciduous based, including a lovely new tree in the collection of a long standing client.

The first workshop we did together, as a test to see what the then relatively unknown and slightly hairier me could do, he brought me a fat little trident maple which was in need of a sorting out. I gave him a detailed explanation of what the problem was and how to correct it, how if it wasn't sorted soon, it would simply get worse, he agreed and it got pruned back quite hard. In 2014 the tree will almost certainly be punching it's weight at Noelanders. I must have done a good job because we have continued to work together and today I was presented with a similar trident.

The tree is a very nice specimen, had some minor flaws and issues structurally but it had one major problem, something which a great number of tridents and other deciduous trees suffer from. If the time and dedication is not put in to prune and thin out the branch tips down so that effectively at each node the branches split into two, then not only will the naked branch structure look hideous on a close up, but it will also affect the vigour. 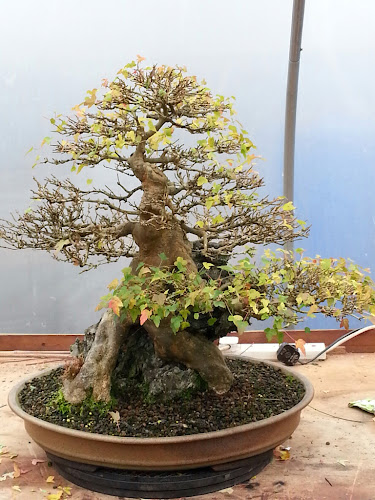 From a distance, the tree looks ok, a nice silhouette, but a closer inspection reveals a fundamentally flawed and potentially fatal branch tip structure. The grotesque lumpy clusters of tiny twigs have been created by lazy technique which is equivalent to topiary. Simply pulling off foliage and shoots when in leaf to create a nice outline. 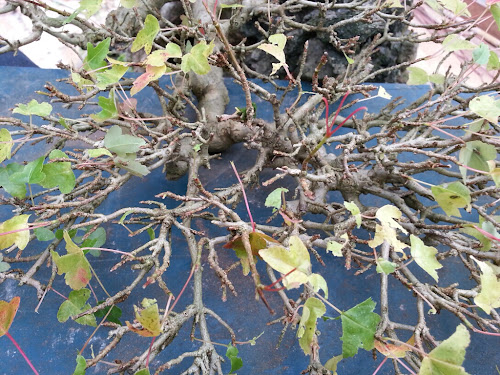 Rather than carefully and religously pinching out the new shoots as they grow, thinnng out strong areas and creating a delicate branching structure, handfuls of foliage are roughly plucked on a single occasion, leading to clusters of branches growing from a single node. This lazy technique is known as cluster plucking a tree. 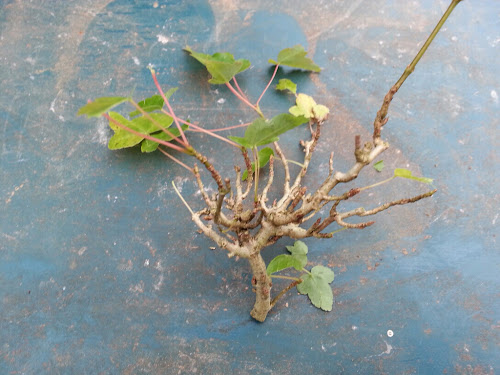 Once a tree has been repetitively cluster plucked to this level for a number of years, the vigour of the branches decreases as the branch tips lignify, harden from the inside, reducing the sap flow and a noticeable decrease in vigour is observed. Similarly to satsuki, the branch tips must be young and green, one year old shoots, or the tree gets old, gets tired of constantly being plucked and gives up.


When faced with a branching structure such as this, the only thing to do, is to rip it up and start again. 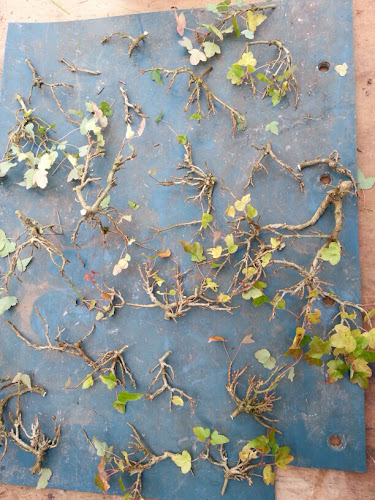 ...total and utter cluster plucking mess
Once the majority of bad branch tips are removed, the tree looks a whole lot lighter and less full but it is now back on the upward slope as opposed to the terminal decline it was on. Deciduous trees need to be renewed every so often, the branch tips need to be replaced when they get old and delicacy in the branch tips is necessary. 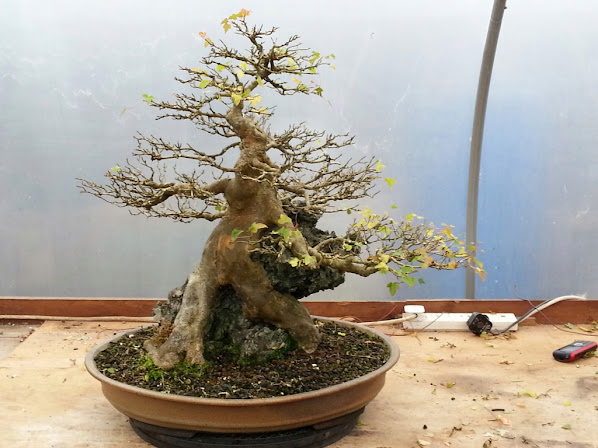 There are still a few branches that need removing but at least the branches will regain some vigour now. Protection over the winter and a period of free growth is necessary to get the tree back up and running. The good thing about tridents is their vigour and predictable back budding on old wood. Give the tree three years of dedicated work and it will be very well ramified, delicate and have healthy, cluster free branch tips.

This weekend I will be up at Willowbog for more workshops, is great when I go places where they ake lots of pictures...means I don't have to.

Preparations for Noelanders are moving ahead with great speed...lots of excitment and enthusiasm amongst the Saruyama faithfull...in times of great bonsai depression it is great to have something to look forward to...Like me, I'm scheduled to work on my own trees in December.