Or for those linguistically challenged...a wine fuelled weekend...thankfully it was not down my gullet.  No alcohol for the monkey at the moment, despite everyone pushing me to drink. 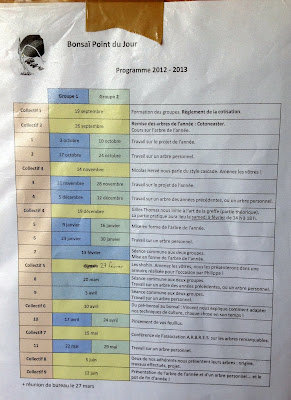 The club I was working with was quite an old club, Bonsai Pont du Jour based in Issy les Moulineaux, on the  south western outskirts of Paris.  Like most of French bonsai, it is very well organised, and there were some aspects that I thought very well thought out.  A detailed schedule, regular workshops and a club policy of buying the same tree for each member to work on throughout the year so that a species or a technique can be investigated in detail just being two of them.

As you can see from the programme, a lot of thought has gone into it.  This is the polar opposite of any club that I would create, so it is good to see how the other half lives.  French Bonsai in general is very well organised with a strong association which organises exhibitions and pulls in a general direction as opposed to being pulled in all directions by personal politics.

I was a little nervous about having to speak French, but as it turned out, everyone spoke English and so my rusty A-level french did not get an outing, although I understood 50% of the conversations.  My thanks go out to
Vincent Bobée who not only helped organised it all, but sacrificed working on his own trees to translate.  I think by the end of the first day he was more tired than I was.
There were too many trees to go into loads of details, plus I only took a few random pictures, so hey, what do you expect..so thanks to Sébastien Coulon and Joseph Lebrave for sharing their photos.

The weekend started with me talking for ever and a day about the trees. 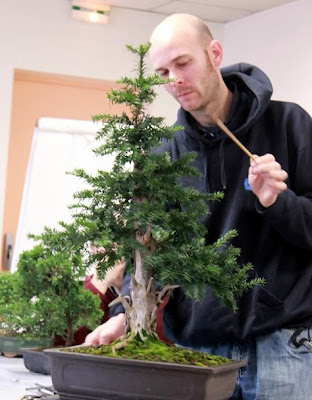 One of the club trees, a taxus purchased from nursery stock and worked into a very convincing bonsai, which was only changed slightly.  Creation of the foliage pads through layering was the main theme. 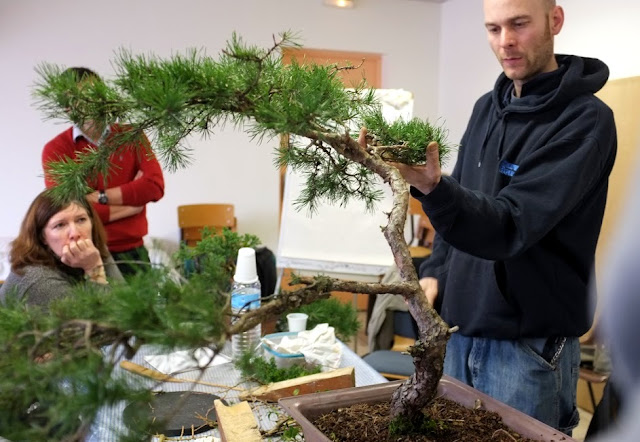 A collected Pinus Sylvestris which was styled(and owned)  by the president, Francois.  It turned into a very french tree, as we kept the lower branch, creating an F, although there is a problem with the balance of t hetree which could be solved with a unique pot, but that depends a little on the root structure, so we gave ourselves options. 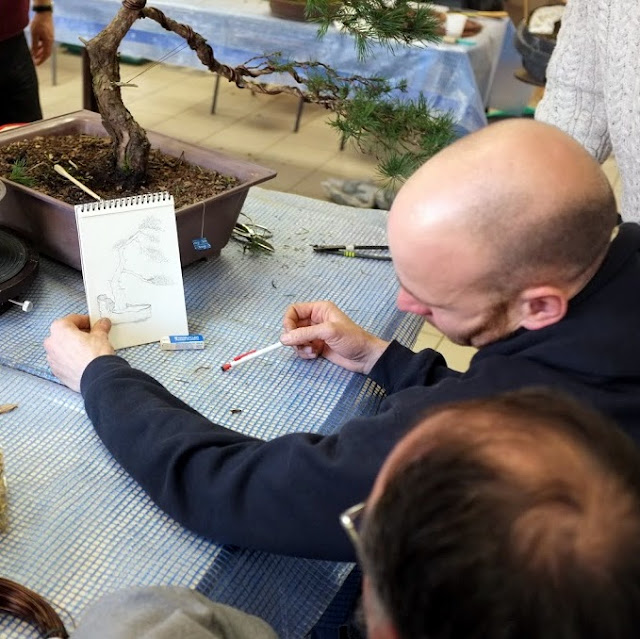 Here I suggest some improvements to the pot design by Francois.  A little more space under the heel of the pot, and a lower toe section. 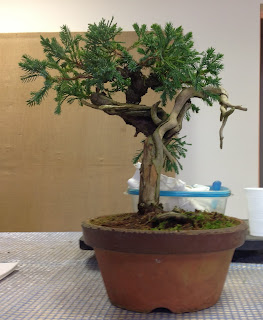 A juniper picked up from Ginkgo, Poor foilage type but an interesting trunk that with a change of angle would make a great kifu sized tree. 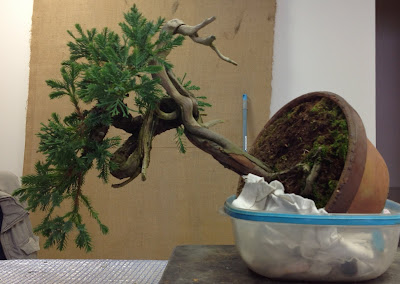 Something along those lines.  We repotted it but the roots were dry, compact and 75% dead.  Fingers crossed. 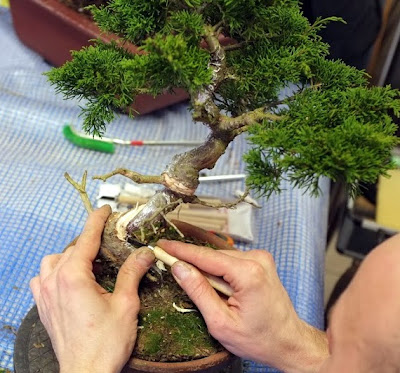 Creating a shari on a juniper, courtesy of the Bonsai Focus video , so at least some people are watching it. 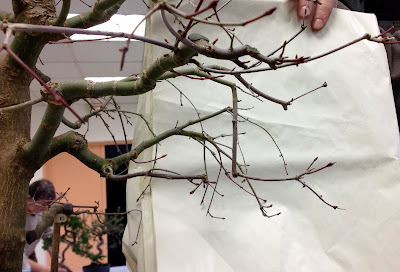 Oh yes. Check out the branch on that.  if only there was some way of keeping that.... 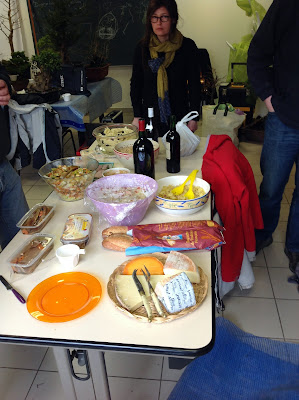 A big feature of the weekend...food glorious food.  I didnt take a picture of the wine, but there was plenty drunk at lunch time.  I cannot drink and bonsai, especially if I am on duty so I did not partake. Plus I'm off the booze. and cheese. and bread...

Although it was a large group (14), and it was difficult to get around to everyone, all members were on the ball and if they didnt have anything to do, they would be listening in, and following the other work going on.  Made a difference to those workshops where people just sit and wait for me to do everything, and sit chatting about nonsense all day long.

All in all it was a great workshop and although I didn't have any before and after pictures, some great trees were improved, and some raw material styled.  One tree in particular struck a chord, and that will come up again soon...a youthful tree with a youthful styling. Something I am really into at the moment.

Hopefully I will have the chance to go back to Paris again, but hopefully a little information has been passed on and those people can take their trees to a new level...onwards and upwards.