For those of you who are interested in funky rocks or old pebbles, then this article in the outstanding California Aiseki Kai newsletter may be of interest. In another shameless self promotion exercise, (or should that be "sharing the wealth" exercise?) it was written by me. It is a seriously abridged version of the 90 minute lecture I gave at the Stone Show in October of last year. I was at the time struggling to think of what I could talk about, but lo and behold, I was able to waffle on for ages about tables for rocks. The convention is the only one of its kind and I always learn something there, even if it is to not line dance after a few too many gins on a crowded dancefloor of super serious rednecks.

Much of the information is equally as applicable to the similar field of bonsai display and many of the table makers mentioned and aesthetic ideas discussed within are from the bonsai world. The two, suiseki and bonsai, are wheels on the same bicycle, to quote some old bloke. Where that bicycle is going and who is pedalling it, nobody knows. At times it has a flat tyre and at times it speeds downhill before crashing into a mangled mess of trees and rocks.

Enough of a tired metaphor...here is the article in jpeg form for you to squint at, or you can read it as a pdf here... 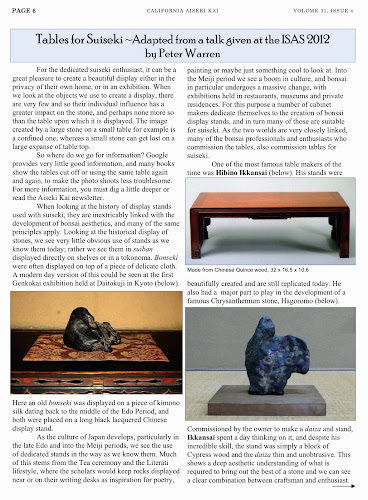 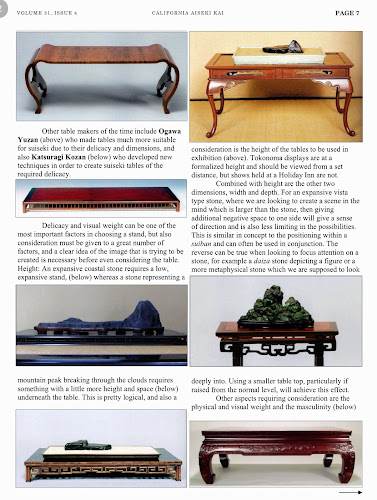 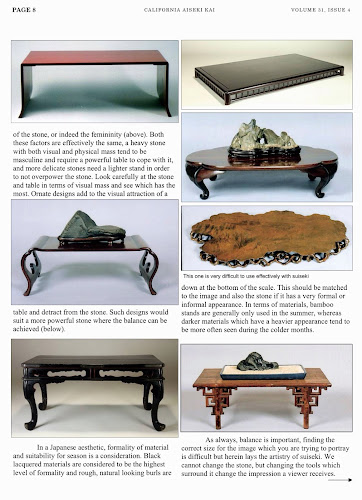 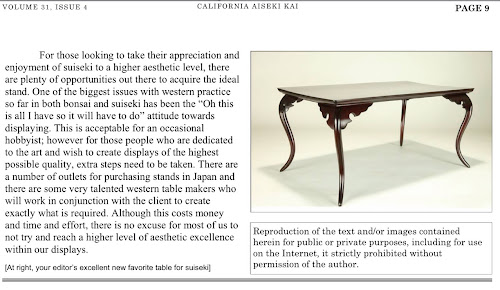 The Californian Aiseki Kai is probably the best non japanese stone group out there and under the leadership of amongst others, Nina and Larry Ragle, they attempt to practice and embrace stone lovin' in a true and dedicated manner, be it pure Japanese suiseki, American stones, stone appreciation, suesok, scholar stones or pebble polishing. Recommend regular reading for real rockers.

(If you think I have a rather glib attitude towards suiseki, then you really don't know me, I do in fact consider it to be a supremely interesting pursuit, but I tire so much of the endless arguements about names, categories and all that nonsense...)

Posted with Blogsy
Posted by Peter Warren at 16:39