Alright, so the horse has already bolted on Noelanders and I am way behind the times. I operate in the analogue era before even telegrams, so consider this a surface mail report delivered by the Cutty Sark from the show.

I personally thought that the show was an improvement from last year although there was not one stand out tree that blew you away. I mentioned to Mr. Neil that I was glad I didn't have to judge as it would have been very difficult. I doubt I will ever be asked and if I did, something weird would win and I would be ostracised from the competetive bonsai arena.

There were a few highlights of the show for me and they were all home grown. 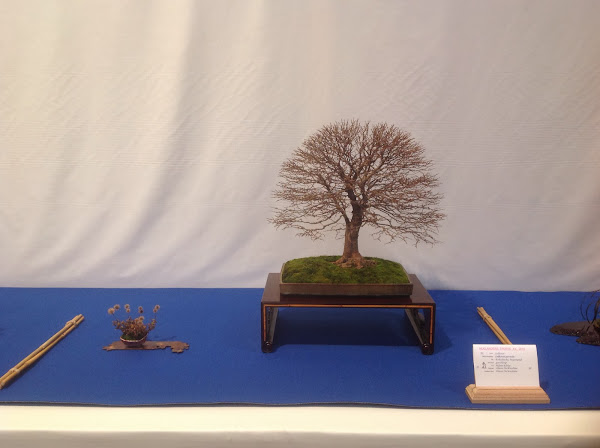 This zelkova was grown from seed for 25 years. It is a refreshing sign of the maturity of the European bonsai scene and testament to the owner. A lot of effort has been put into the creation of the tree which was followed up by a very thoughtful and elegant display. The dead thistle(?) heads a perfect symbol of lowland meadows at this time of year. It deserved a nomination and received it. 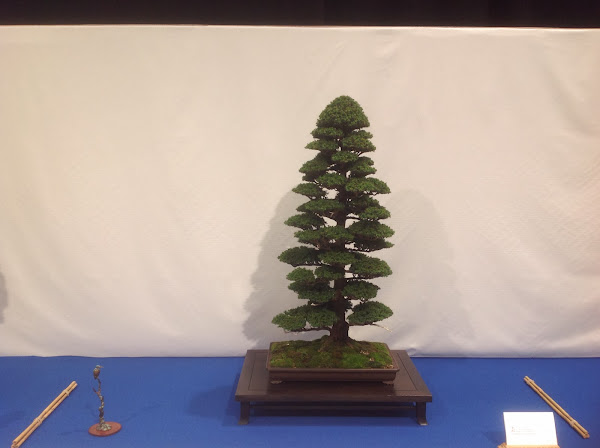 Both Mr. Snart and I had a little tremor in front of this tree. It was an almost perfect example of the species as bonsai. I said at the time, "even if it was a recent import straight of the container, it deserves something". I was later told that the dude, and lets face it he is a dude, who made it, grew it from a cutting...A cutting. Sadly it was not displayed to it's full potential, although Henk Fresnen's bronze scultpures are beautiful, the image didnt work for me. A slightly longer, narrower antique chinese pot and displayed on a black laquered jiita would have made this tree a candidate for best in show in my opinion. It is a 100% classical Japanese image and so that should have been continued further. As it was, I marvelled at the skill that had gone into it. I could not have achieved that in a million years. 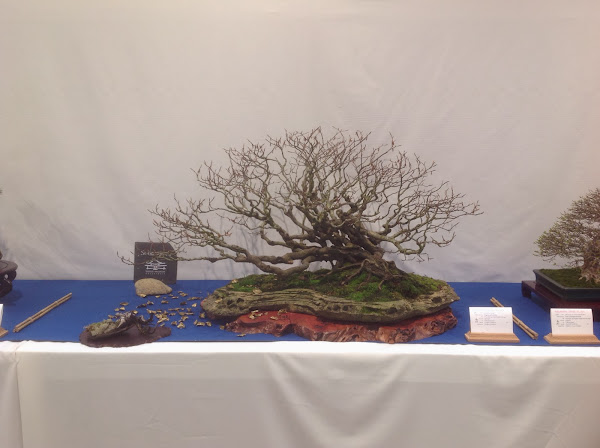 This beech is a favourite of mine belonging to an occasional client and friend of mine, Mr. Jorge Campos. His friends have always laughed at him for this tree but on my first visit to his garden I was captivated by it's wildness. It is just as though it has come out of the mountains. Wild, untamed and full of organic, natural ego-less character. Mmm...nice.

We took 14 displays over and they were all looking good. A few of them were close to my heart so here is a run down of those and why... 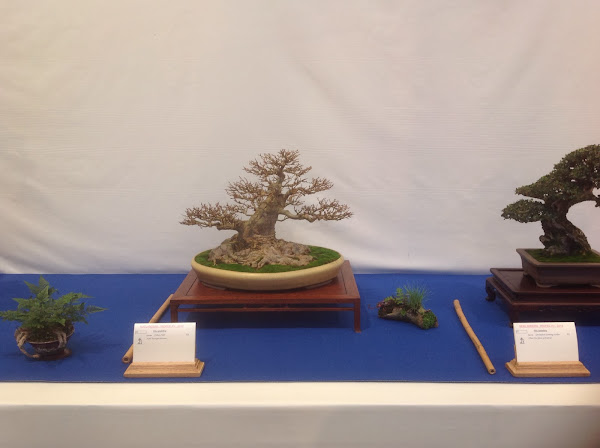 A fat cow pat trident that melts into the pot, belonging to John Pitt. This was the first tree I ever worked on with Mr. Pitt who brought it along to my first ever UK workshop at Ashfield Bonsai Club. It was a bit of a mess and John later told me that he brought it along as a test to see if I knew what I was talking about. We sat down and I explained the process of developing a trident, the importance of starting from a good base structure and we did some fairly extensive branch removal. I told him at the time (not with 100% confidence) that within 5 or 6 years, it would be ready for show. That was 2008. Without wanting to boast, it is the result of teamwork, the majority if the effort put in by Mr. Pitt, and the 5% that i did. I passed the initial test and have subsequently gone on to have a very happy and successful relationship with John and his dogs...I mean trees. 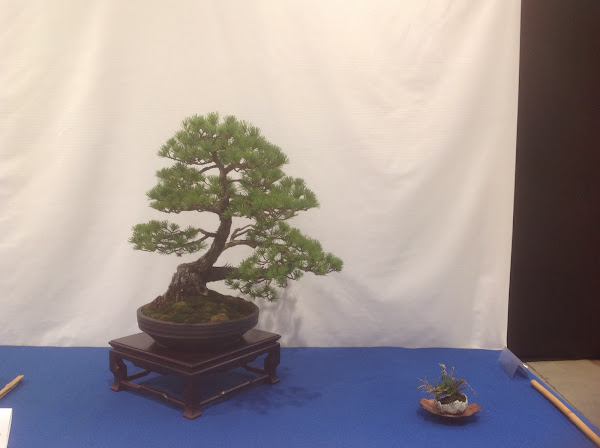 This was another tree from that fateful first workshop belonging to Mike Rose. We removed a lower trunk that day and wired it out. I like the naturalness of this tree and was glad to see it when I picked it up. Mike had wired it over the end of last year by himself and I was hoping to see that he had followed my advice and gone against his learned and natural instinct for neatness. It is a throwback to the Kokufu heyday of the 90's to wire every single branch and have things super tidy and arranged in an OCD neat fashion. This obviously has an appeal in Europe who fell in love with the king of that era, Mr. Kimura (Masahiko, not Reg). Looking at trees in Japan now and some of those super mature Yamadori trees that we see in Europe, there is a definite movement away from the static, set in plastic neatness of spirit level flat foliage pads, a perfectly semi spherical apex and all that which made the old guard turn away from the over worked bonsai of the time. For a perfect example of this, look at the work now by the king of that era, Mr. Kimura. Limited wiring, natural mature branching a looser feel to the trees. This tree will never win any major awards, but it is a sign of steps in what is my opinion, the right direction. It was neither unwired and untidy, nor was it overwired and plastic. It was, like Goldilocks' third bowl of porridge, just right. 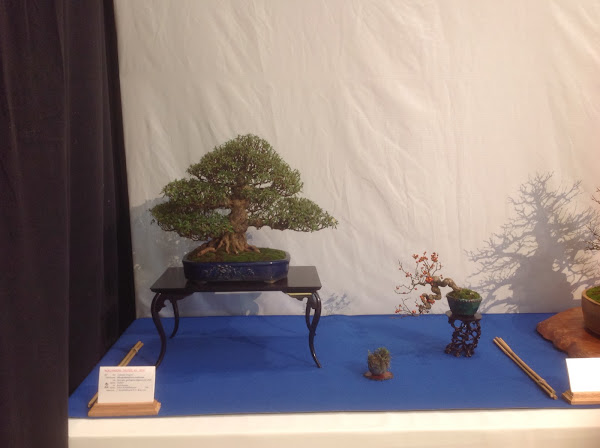 The azalea from John Brocklehurst is another I have worked on with the owner for a number of years, making small but significant changes. A slight tweak to the front, thinning out branches and keeping it healthy. Azaleas are much more of a horticultural challenge than artistic, and he has done well with this one, despite a pre show panic about the semi deciduous nature of the species. It lost a lot of old leaves in the month before the show and looked a bit untidy. A fresh pot, cleaned up trunk and the quality shines through. John is a self confessed Japanese bonsai enthusiast and so this display follows suit. Displayed in an antique Canton pot with an Oriental bittersweet in a Koyou pot as a secondary tree. It looks, as John Armitage said during the photoshoot..."just like kokufu". Not a single wire on either tree. Yeah baby. 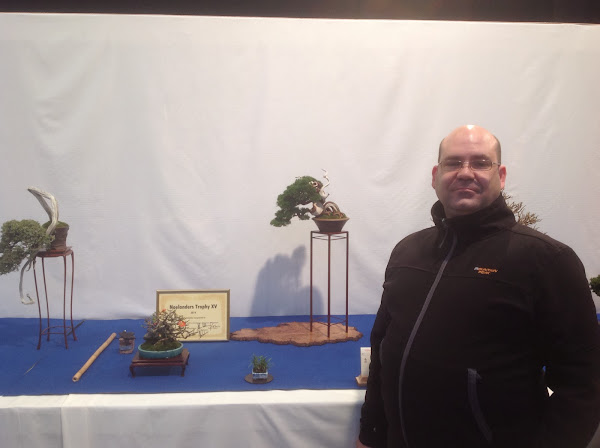 Speaking of Chairman John. Well done. A superbly presented Kifu display, fully worthy of winning the nomination and in many peoples opinion, the best kifu display there. You can even see a tiny little bit of a smile forming on his face. Inside he is delirious :) 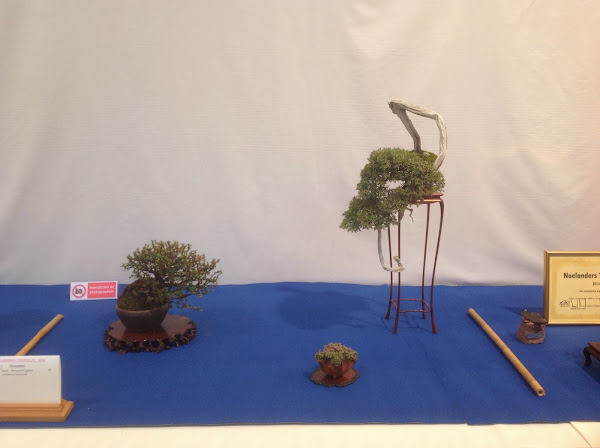 Sitting next to John was my boy Yannick. A kifu sized Communis. I will say it again. Communis. I think I have seen that Chinese pea and root stand some place before. Next year, come prepared man! (That is unfair because i told him I would sort him out with whatever he needed). I love the fact that he turned up with the tree shoved in the seat back pocket of his van. A man after my own heart. 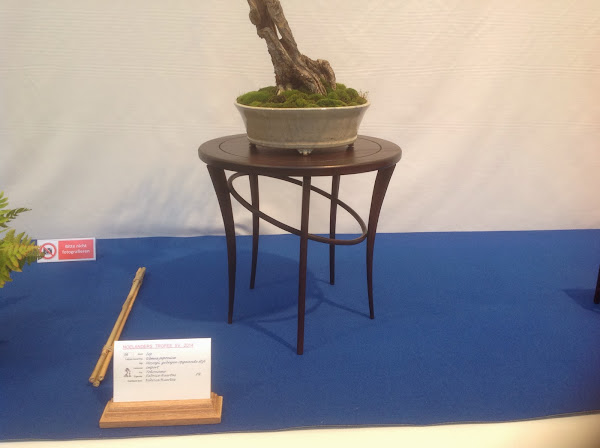 I was also impressed by this stand, by a french stand maker. Anyone know who it was? I looked but can't remember. It was p.i.m.p and deserves an award winning tree on it.

The real highlight of the show and weekend for me however, was my first meeting with this little man. Ryan brought his wife Chelsea and baby boy over to meet the European bonsai scene. He was a well behaved little man and watched his daddy demonstrate on two pieces of monstorous mugo. Outstanding demonstrations...again. Setting the standard for everyone to aspire to. 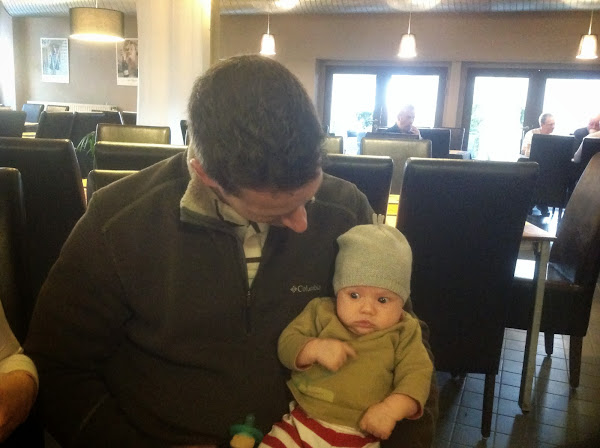 Poppa Ryan. Who would have thunk it?

After the show was finshed, we made our weary way home and dropped off all the trees. I had a guest staying for a few days before I left for Japan, the assistant du jour, Michael Feduccia and his wife who were having a well deserved break. I showed them my pitiful garden and London. They said they had a great time, but Mike was over the moon when he saw a red phonebox and a bus. He needs to get out more :) 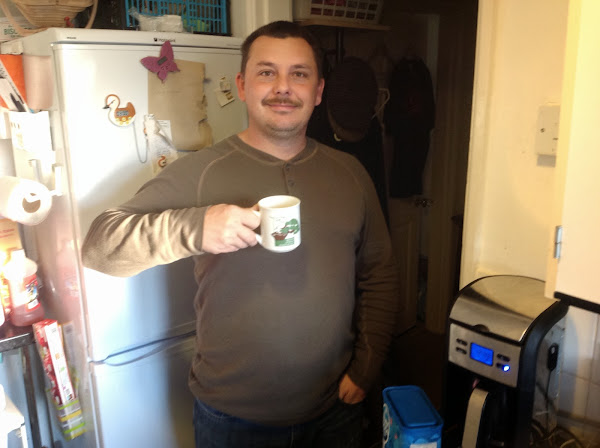 Apologies to the others whose trees we took, it isn't that your trees are not great, but we are coming in to land now. Expect some kokufu live blog updates, or I could just repost all of last years again and hope nobody realises. Seat belt is fastened and ears are popping...