Planning for the future

So a small window of opportunity in the weather and schedule allowed me to finally get around to working on the juniper that featured in a few posts ago. Many thanks to Les Storey whose tree it was/is , the tea and sarcastic comments.

It is a big garden juniper which was rescued from a garden up in the Wirral many years ago, then languished in a pot for many more years before I got my hands on it. It was very weak and had almost no roots, so for the last three or four years after repotting it has been just building up strength (that is another way of saying I have not found the time to work on it). Now it is strong enough and has a good root mass in a loose soil mix (20% garden compost, 80% Perlite). More importantly the live veins have settled down and thickened along the main arteries up to the only living branch. Although there is a lot of green and wood up top, only one thinish branch remains which needs to be fed. This leads to thickening of the live vein along the section feeding it.

My plan, right from the start had always been to graft some Itoigawa whips into the trunk and redevelop the tree with branches lower down and with a workable foliage. The lower trunk is actually quite powerful and if the bottom section only can be used then there is potential for a very powerful, chunky little chuhin sized tree. 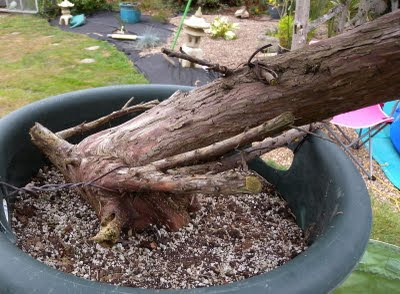 Obviously a lot of dead wood carving to be done in the future, but the main job now is to get the live vein thinned down to close to where we want the final vein to be and get the grafts in. Any detail work on the dead wood can be done once I am certain of graft success and the top of the tree is removed. I will want to use some of the jin up top as well and there will be some sand blasting to be done once it gets into a bonsai pot. The carving today was simple to reduce the live vein down and then allow it to dry out. 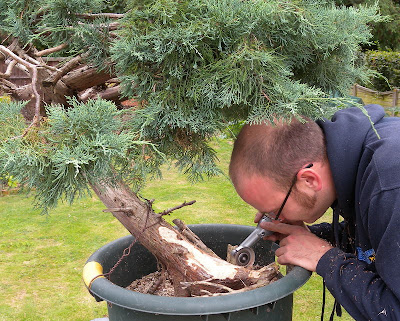 Here you can see me hard at work. It does happen every now and again and yes, I do use power tools.

Graft point and whip are prepared. The channel is deep enough so it is at least 50% buried. Cambium layers are revealed and best attempts are made to join the two together. 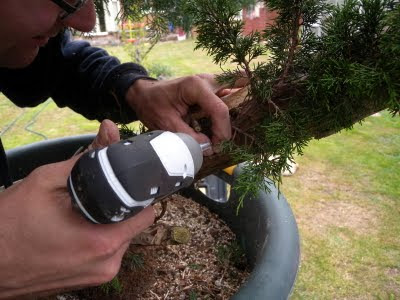 The whips are screwed into place. I found some mini-screws in Japan which are the absolute best for this purpose, they are only a few mm thick, long and strong. You just have to be careful with the impact driver and not go to quickly. They will never be removed but a few didn't go all the way in before the head got mashed up. They will need to be cut off carefully later. 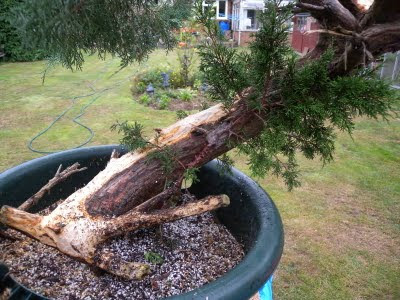 The finished tree. Two grafts, one front,. on back were done, just before a torrential downpour of rain, hence the roughess of it all. The main job was to get the grafts done now, so it has a bit of the growing season left to help join up. I'm hoping that I'm not the only one to see some potential in this. Obviously it will never be a masterpiece compared to a mountain tree but it was better than throwing it out.

The foliage on top was reduced to allow sunlight in and also to stimulate the tree into growing. It has realised that half the foliage is gone and puts effort into growth. This will help us with the callusing. The reduced live vein up top and also around the back, is helping to channel the majority of flow around the whips. If this does not happen then the two wont join up.

Due to the rushed nature of the job, I am dubious as to the success rate, I think the back will take but not the front. Still I have more whips and plenty of time. I doubt we will see this tree anywhere near finished in the next ten years. Still, step two in the plan is achieved, we shall have to see how effective it is. It has benefitted from several years of being ignored, now in order to allow it to join and then gain strength, it will be ignored for at least a full season. This time next year will be the next time I will look at working it. If the growth is very vigorous on either the top of the tree or the whips then it may require attention.

If we are successful, further reduction of the foliage up top initially to next to nothing, then nothing, along with further thinning of the live vein will be next on the list of jobs to do. It will need to be put into a bonsai pot and more suitable soil mix in the near future after the grafts are full taken. Although I foresee no problems with that, there is a small risk and it is not until I have reached a relatively risk free point will I spend the necessary time on the dead wood. As it is, the deadwood being fairly soft will rot away if too much is done too quickly. So waiting is the key for the moment.

There are some trees which can be made quickly, there are others which require a little more long term view. There are very few trees that have nothing good about them or any redeeming feature. It just depends how long you are prepared to wait and to what lengths you are willing to go.

Text for the book comes slowly at times, quickly at others...possibly due to the fact we are absolutely thrashing India at the moment in the Cricket.

This morning before play started I wrote this, which seems apt...

The fundamental point to remember when appreciating Bonsai is that you are looking at a natural object which has been artificially styled and maintained. The lengths to which this is taken are aesthetic and philosophical decisions, yet the most important fact remains that bonsai is a natural object that is being appreciated, albeit a highly stylised one.

I need a harsh editor I think
Posted by Peter Warren at 14:06