And so a silent November has drawn to a close and those following me may have wondered why no posts...well one thing my mum always told me was "if you can't say anything nice, then don't say anything at all". That is not to say that life has been terrible or there has been nothing good happening but sometimes life just conspires against you.

To say I was busy was an understatement...arriving in Japan at the start of November I, along with the long suffering younger apprentices spent two weeks, day and night preparing the garden for the arrival of all the international visitors for the 11th Aspac convention which was held in Takamatsu. During those two weeks I managed a day and three hours of working on trees. As per usual no pictures were taken but I did manage to continue working on a Needle Juniper that I had saved from death a while back and had repotted earlier this year. It was good to see it growing well again and the customer made a special point of bringing it in for me to work on which was a high point. The rest of the time was spent building a pond and reworking the garden.

The Takamatsu show was good but very tough. We had a trade stand and had to be down there to set up from 7 am. It was an 11 hour drive through the night of which I drove 9 hours...needless to say I wasn't in the best state of health when we arrived. The car was loaded up with what we estimated to be half a million dollars worth of stuff in there, just pots and stands etc, no trees...although we did come back with a load...so crashing was not an option. The Chief, in true Chiefly fashion flew down and arrived the next afternoon after we had set up the stand...and nervous that the arrangement was not to his liking, I awaited his arrival with dread. He turned up with a smile on his face and just said "Yeah, looks good...we won't sell anything though". For those that don't know him, he can be a great motivational speaker. 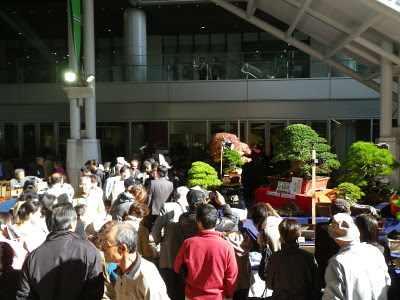 Picture of the Aspac crowds, courtesy of S-Cube. You can find more here on the IBC forum
As it turned out though, we did sell stuff. Quite a bit actually. My personal tally was higher than expected and if I had helped to sell the $250,000 pot on the neighbouring stand to a Singaporean gentleman then I would have trumped the Chief...not that anybody keeps score. Sadly/Thankfully the expensive pot stayed unsold, not that I did anything other than translate...the buyer had been studying pots since before I was born...

The show itself was good in the sense that I met up with old friends, made some new ones and I managed to survive the onslaught of the Chinese. They arrived in their hundreds on several tour groups and it was an intense experience. It is difficult when there is no common language and the only words I know in Chinese are "expensive, Ming Dynasty, No problem, brown noser and delicious". You can imagine the quality conversations that went on there.

Hanging out with some of the younger members of the bonsai community was a highlight and I also got to spend some quality drinking time with my senpai Akiyama who is at this moment in time, enjoying his second Prime Ministers award at the Sakkafu-ten, pictured below. Sadly I couldn't stay in Japan for it, but the time we had together, drinking and talking about Bonsai was great. There are some people in life who understand implicitly exactly what you mean when you say something and he is one of them. 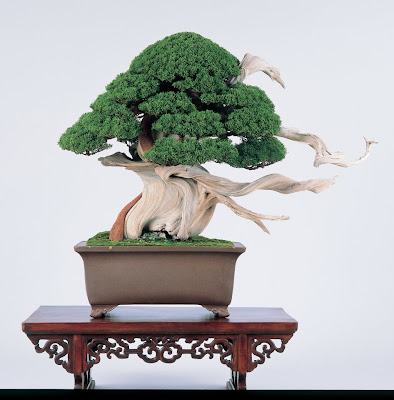 Akiyama's prize winning tree...been in the family for 30 years. I had the privilege once to touch it.

Anyways after driving back to Tokyo (six hours drive this time), I also managed to go to Kyoto which was disappointing in many ways, the autumn colours were poor and the Taikanten was a little underwhelming. Once again though I managed to chat with a load of Bonsai people and learnt some stuff. I also managed to pick up a scroll very cheaply that is an original from 1704 which is great. One day it will make an outing...until then.

One of the reasons that I felt unmoved to write was due to the raging egos that have been dominating my life for the last month or so. All problems in life seem to arise from the presence of other people, especially those who are unreasonable and think that they are the most important person in the world. I often wonder if it is a disease specific to Bonsai, like Sphaeropsis Tip Blight or it is something which affects the world at large...I turn on the TV and see X-Factor and realise that there is no escaping it. For Sphaeropsis there is a cure, broad spectrum fungicide (ideally two or three varieties) applied monthly throughout the growing season, ; but for rampant ego related problems?

For the rest of the month I will be getting back to what is important in Bonsai...concentrating on my own trees, my own people and trying to enjoy Christmas. Noelanders is just around the corner and preparations for that are going to be in full swing.

Apologies for the depressive tone of the blog, its not all bad, it's just the black monkey visiting but as a great man once said..."Inside every bag of sh@te there is a speck of gold, it might just be the wrapper off a Caramac, but it's there"
Posted by Peter Warren at 07:44