Only sometimes...I question everything, I am the first to admit, then when you catch me in a mood like this I can be tiring, even embarrassing..
What a week it has been...the van has clocked up a few miles, I have seen a good number of friends and there was Armageddon at home. A swing from high to deep, all in the course of a single day...my very own black thursday.
As a warning, this week I have mostly been listening to 80's music, particularly dark and depressing stuff so there will be some influence here. My apologies.
I had promised that I would get back to working on trees this week and I did manage some, but more importantly than that I managed to see a few friends and catch up. Some things are more important than little trees in pots, not much admittedly, but health and happiness are.
On Wednesday I managed to get up to Willowbog Bonsai to drop off some trees and to see the resplendent Mr. Snart. A man after my own heart we sat and complained about the state of everything and had jolly good fun doing so. I did a little work up there, but not much as I was interrupting Peter's day off which had been allocated to sitting and thinking. The results can be seen here on the Willowbog blog, which, unlike this organ, is regularly updated. I worked slightly a few trees for sale which is something I enjoy doing. Not pushing them towards what I consider to be the only future but giving options to those who then purchase them. When working from a commercial point of view it is important to think of all the different possibilities that a tree can have, for example what somebody who likes ultra compact modern Japanese style trees would make, or what somebody who likes more free flowing "naturalistic" trees would prefer. In many ways this makes you question your own tastes and preferences and keeps you on your toes, rather than falling into a rut of always making the same style of tree. That doesn't apply to trees made for myself though...my rut is deep there.
After an evening meal of the highest quality (behind every miserable bonsai professional there is a superb woman who sees the potential in inferior material ;-) I fell asleep on the sofa as is my modus operandi. Awaking the next morning, the beginning of Black Thursday, I set out in pitch black over the sullen misty moors along winding roads and snow covered passes. It would have been a beautiful drive if there had been daylight and it wasn't raining and blowing a gale. As it was I survived. On to the M6 in the torrential rain I pulled in at the first service area I could and bought a coffee, it was here that I realised a certain age of my life had come to an end. Unshaven and looking ruggedly bald in my normal way, one of the ladies behind the counter gave me a special smile which would have brightened my morning had it been the attractive twenty year old blonde who completely ignored me. Sadly, I have graduated onto MINLF territory.
Anyway, moving back to more important matters, I made it John Pitt's place and got down to business. I had kept a few trees at John's which I had picked up before going to Japan, some well established European yamadori. I worked on one which I think has an outstanding future. Sadly that future will be at least 20 years away but it is one of the few scots pines that I think will make a genuine bunjin tree...but for that to happen, I will need to starve it for a good number of years and just keep plugging away with the scissors
Before.. 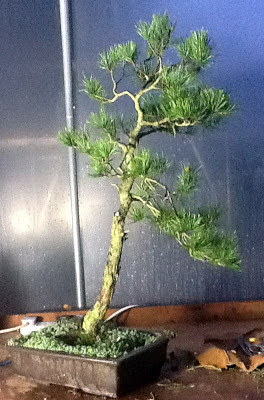 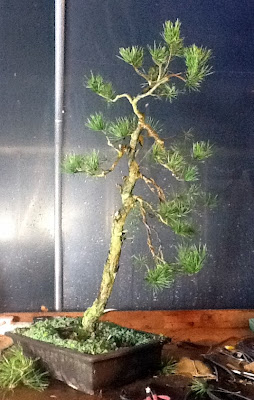 Now, you may think that I have done nothing to it, that it looks messy and untidy, that it needs wiring and pads need to be created. If I wanted to create an instant image then maybe so. For this tree, I am in for the long haul and have decided to try for something which takes time and patience and not wire. In order to create a true bunjin tree, there must be a lack of artifice, a natural feel which stems from experience of suffering and severity. That can only be created with time and patience. It won't be close to being ready until the branches have started to develop bark and the needle size has reduced after being grown in a tight pot without repotting for at least ten years. Watch this space as they say.
Speaking of experiencing suffering, my already long day took a turn for the worse as I got a phone call from home saying that the gale force winds had lifted my poly tunnel up, flipped it over and it was threatening to take flight. My little brother, bless him, was holding onto it and trying to remove the plastic from the frame. After going to the planned Christmas dinner with the Ashfield Bonsai Massive I made the long drive home fearing the worst. It wasn't until I got close to home that I felt the wind, coming off at the junction, I was blown halfway across the road. Wearily making it home, I assessed the damaged...which was surprisingly little. The electrics were all messed up, the under soil heating cable has pulled out and snapped, the poly tunnel a mangled mess, a pane of glass or two broken but seemingly none of the trees were damaged in anyway. Thankfully there was no frost and the temperature stayed above freezing but the wind was horrendous. Behind the house is about two miles of flat farmland without a wind break in sight. The first wind break was the polytunnel it seemed. Despite the frame being firmly staked and pinned into the ground, weighed down with bricks and everything I though necessary, clearly nature played this trick on me...she is too rough and I am too delicate.
After a few hours sleep the clear up operation began in the dark...as the frame was mangled, it was impossible to unscrew and so I literally pulled it apart with my bare hands whilst thinking of alternatives...I considered burning every tree and then doing a Reggie Perin. Sometimes life has a habit of just kicking you full square in the knackers. No matter how hard you try, somebody or something just comes along and pisses on your bonfire. Here I was, all cock of the walk with my super high-tech polytunnel and mother nature just laughs in my face and says " that serves you right for wiring so many trees and thinking you can make them more beautiful than me...what are you going to do about it now baldy?"
Despite what you may initially think, at times like that, doing bonsai is a god send. The whole point of bonsai is to enjoy nature...even though she is a harsh mistress. Without the severity of the winter we would not enjoy the freshness of the spring, without the eternal struggle against the elements then there would not be beauty such as this... 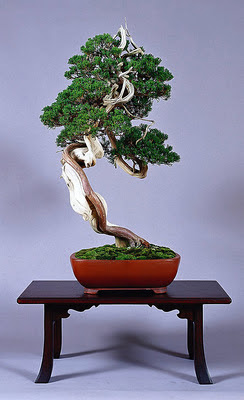 One must take the rough with the smooth and accept that with one hand, nature giveth, and with the other hand she slaps you in the face and causes chaos in the garden. 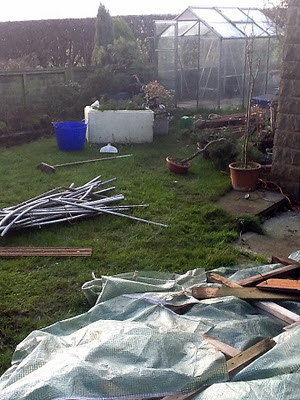 A day spent tidying up the glass greenhouse and maximising space in there allowed me to find a home for everything that was small enough and delicate. Other trees which can survive outside were buried in the now non-heated bed and covered with the plastic from the poly tunnel skin. Whatever will be will be. Miraculously, the delicate light bulb from the glow lamp survived and I was able to put it up and the trees didn't even skip a beat...or at least I hope not. 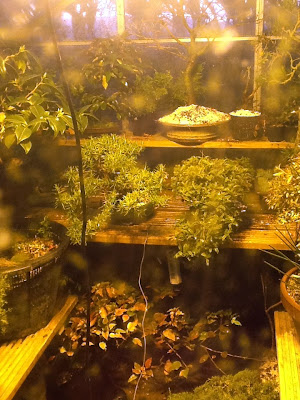 A few problems with the heater and thermostat were sorted out that evening as temperatures plummeted to minus 5. Let us pray to any god that is listening that the glass greenhouse doesn't get blown over in the winds next week. If it does then...I don't know what I will do. Always remember that there is only so much suffering a tree can take before it dies rather than turn into a bonsai. We walk along that knife edge everyday.
After sorting everything out, the drive down back to the warmth of my long lost bed was uneventful, except for the depressing disco in the van...The Smiths, the Cure and Depeche Mode on a constant loop, with me seat dancing to stay awake.
"Let us have a black celebration, to celebrate the fact that we have seen the back of another black day"
Merry Christmas
Posted by Peter Warren at 13:51