I hope. No excuses this time...I have just been busy, really busy since before Noelanders and it has been constant...I have only just caught up with myself and got a little free time. With that free time I have just watched three back to back episodes of "Storage Wars". I am not sure if I can recommend it but it was strangely enjoyable.

Regular readers of Peter Snarts blog will have read about the antics at what is fast becoming the premier show in Europe. The digested version of what happened was...planned to offer service of prepping, transporting and returning clients trees a la Kokufu, had a great response from people, lots of trees involved. No major problems getting there except for me absolutely falling apart with nerves about an hour before we got there only to get my game face on and get everything sorted satisfactorily. To be honest it was a massive adrenaline rush and one I have no felt for a while as the excitement surrounding the judging and setting up at Kokufu disappeared a few years ago for various different reasons. It was refreshing to actually do something make or break and have it make, above and beyond expectations.
At the show I got to meet many people including the hottest ticket in the Bonsai world...Ryan. As per usual his demo was outstanding, sometimes I feel like just giving up after seeing him work but then...I know he represents a different school of thought to me and I am better at making a fool of myself drinking, which I did. There have been some character assassinating pictures on the net of my disgraceful behaviour and I guess this is the point where I should apologise for my shameful besmirching of the good name of British Bonsai.
But I can't see that happening. Roll on next year, I'm going to raise merry again.
Immediately after returning from Noelanders, Saruyama Towers moved...to a secret location with a small but perfectly adequate and secure garden. It was the first time I have ever moved house properly and it took far more effort than I expected. I did however realise just how many pots I have collected over the last few years...they came out from underneath the bed, the sofa, in cupboards, from the kitchen...as I keep telling myself, they are an investment. I will take some pictures at some point...but dont hold your breath.
The annual trip to Japan was immediately after the move, literally. Kokufu was a little earlier than usual this year and I won't lie, it was pretty awful. The location changed last year and this due to renovations at the museum and it is not a nice place. Akiyama and I got lost on the way there and were the last but one to set up the trees. Cue evil stares from those who put the ass in the Nippon Bonsai Association. The sales area was as always far more interesting and expectations were high as always, only to be dashed by an appalling first day which was followed by a daily grind through the week. There was a distinct lack of customers and especially foreigners. In total I must have seen around 20 over the week, and at times there were more foreign apprentices than visitors. I think this is down to the large numbers of visitors the Aspac and Taikanten last year...well I hope it was. I was kept fairly busy but for the first year in ages I barely had to do anything of an evening, so it was quite a relaxed kokufu...but cold. This last winter is Japan was cold, so cold that the Prunus were only just flowering at the end of February when I left...normally they are finished by Kokufu.
The situation at the Chiefs has changed dramatically of late, two of the apprentices quit at New Year and there are two new ones, one of whom was a trained chef and the son of an old school bonsai pro, the other a kid fresh out of uni. Fukita-san the eldest apprentice has also been helping out at the garden and will be for the next year at least. This makes for a very interesting dynamic as we have never really spent any time together and it was both difficult and relaxing for me to give up responsibility for the day to day running back over to somebody else when I have been doing it for the last five or six years. It was a good learning experience however and many tricks and tips were passed down.
It should also be noted that Yannick Kiggen, the young Belgian Bonsai artist whose help was incredibly well appreciated at Noelanders, came out to stay at the nursery for 10 days during kokufu. He was as popular with the Chief for his manly muscles as he was with the ladies. A bright future for the lad.
After Kokufu, the chief was away for the majority of the time and the hard work began, repotting half the nursery it seemed. On top of the normal work given by the chief "Do that one, that one and....just do them all", I had a lot of work from clients who always ask for me. Always nice but the work piled up and up until the last week where I was working until past midnight most days.
One tree I worked on was one I had been itching to work on for ages... 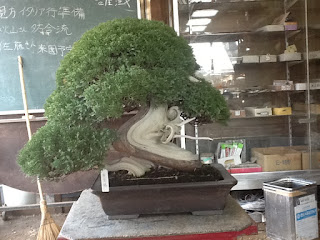 And a welcome return of a tree which featured on the blog a year ago...the Aozora of Uematsu-san although for some reason the pictures seem to have disappeared from the older pages. 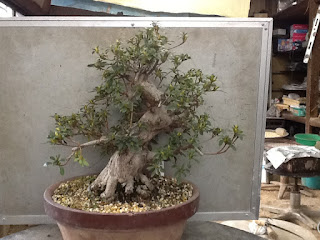