Blogger has changed the editor bit, it's all different...have I been away that long? Why do they feel the need to change everything so often? Anyway...

Rain is stopping play at the moment, I am in the middle of clearing the new garden, all I seem to have done is create more mess, but least it is centralised in the middle of the garden.  I am waiting on some people to do the fences and for a shredder to get rid of it all...then I can do the ground work etc...it is all good fun.

Seeing as I haven't posted for so long, it is a catch up situation...

So my time at the Chiefs was very different this year, mainly because we have both moved on and I am no longer needed...which is good because I had begun to resent the fact that I had to go back so often and there were older apprentices closer who should have been doing more to help out.  Every garden goes through periods, eras where a certain type of apprentice was present and that continues for a few people and there could be a sudden change in a different direction.  I was always on the receiving end of senior apprentices telling me "it wasn't like that in my day" and telling me to do things in a certain way which they had learned ten, fifteen years previous.  It wasn't as if either way was better or worse, just slightly different.  A clash of eras was always on the menu at Kokufu time and to a certain extent there was a little of that this year with the prodigal apprentice Fukita-san returned to take a tentative place at the top of the family.  He is nice enough to me and very talented at Bonsai but there is more to life than that you know...but not much more.

So my era has finished, things have moved on both in my world and Chief Land and I felt out of place, as did a lot of the customers who I had become close to including one chap who is one of the coolest 60 odd year olds I have ever met.  He used to be very active in Bonsai, displaying at Kokufu most years but that fell by the wayside for various reasons, one being the economy. Whenever I am back, ha calls me up and brings trees for me to work on, although they are mostly just stuff he enjoys playing with. He does have this Chuhin sized Juniper (well it was originally)  that I had wired a long time ago, one of the trees that I trained on when I was still super enthusiastic about wiring everything to the tips.  Thank god I got over that quickly. 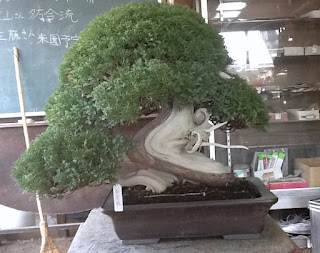 It is an Itoigawa originally made by Mr. Kimura, (you know him, Reg Kimura from down Mansfield way) and it was grafted with a variety which he used extensively due to it's ability to grow fast and long.  There are several types of Itoigawa foliage, each has it's own plus and minus points, the negative on this type is that it grows quickly, which is ok if you want to make a tree quickly, but it also leads to the tree getting big quickly if not properly dealt with.

This tree had not been worked on for at least two years and not seriously for at least eight.  It had been pinched a little last year but had developed a lot of juvenile foliage... 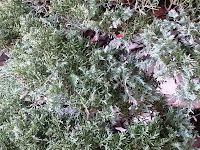 The reason for this was the tight compacted soil putting the tree under undue stress.  Juvenile foliage comes for a variety of reasons,avoiding imbalance is the fundamental thing to remember.  Do not prune too much, do not leave the repotting too late, do not pinch too hard...keep the tree on an even keel and it will keep on sailing. 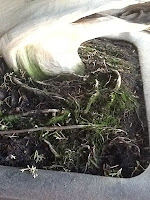 So it was left with me and after telling the customer that it needed a severe prune back, possibly removing half or more of the branches, he said, "I will leave it to you"...now that is not always a good idea...but he trusted me and up to that point, I hadn't failed him yet. It was transplanted as soon as I could and I looked at the tree with a view to doing what I wanted to do for the good of the tree and for what would be best for the client in terms of shock value.  I asked Akiyama what he though about the main dropping branch, he immediately said it had to be removed, I asked the Chief and he said leave it, don't do anything drastic that the customer could complain about and Fukita said that I should do what the Chief said, but if it was his tree then he would cut it...I had wanted to cut it off about five years ago and here was the opportunity....welonce the Chief left for Italy I would have....I just had to get the tree done, finished and out of the garden before he got back! 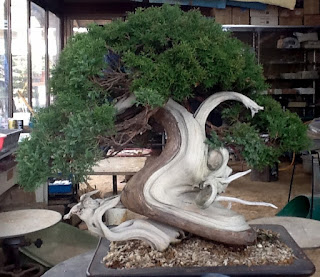 The day the Chief flew off I called up the client and double checked that he was ok with me cutting off the main branch.  I explained why and he said he was playing golf and that he was ok if I was....so bish bash bosh and half the tree is on the ground in about 5 minutes.  I had just finished going through the rest of the foliage, cleaning out the dead, the weak and the straggly when who should walk through the door but the owner...now he had given me permission but it still felt like I had been caught in flagrante and I looked as guilty as OJ. Half way through such a drastic transformation, it never looks good.  There are plenty of trees where you think yourself, can I actually pull this off and make it look ok? Doing demonstrations up on stage especially.
I did my best to kick the biggest branch under the table so he couldn't see it but it was useless, half his tree was missing.  I just had to explain again why and what was going to happen.  Thankfully he was more interested in complaining about his golfing partner and then lying to his wife about being stuck in traffic.

In the end, it took a few nights wiring to get it in shape but there was a serious structural reworking, not immediately obvious but the branches were wired and pruned in such a way that they would grow into shape in the next six months or be able to be pruned back into shape.  The immediate styling was very rough because we were working with weaker internal branches which had just been dewired, repotted and pruned.  Not the greatest idea to then subject them to another stress.  It still needs another serious pruning once internal shoots have strengthened and sent out newer shoots, however as stage one of redevelopment, the destruction and building foundations, I was pleased with it.  The apex is still a big green mushroom but now we have the ability to get some definition in there within a year...before it was a case of "how big do you want you shiitake, sir?" 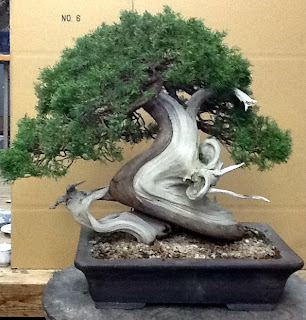 In the end, the customer came to pick it up before the Chief got back, but Fukita saw it once it was finished and was surprised that I had done it, but said that it was good.  He would say that though.  Most importantly the owner said that I had done a good job and to give my regards to Lady Saruyama...and to buy her something nice.

See I do some work every now and again, just fail to take pictures of it...and when I do they are appalling quality.

Other trees that got done are the little Aozora Satsuki that was featured a while back.  Ue-san brought it back and said sort it out.  A year since it was planted from raw stock and time for the first wiring... 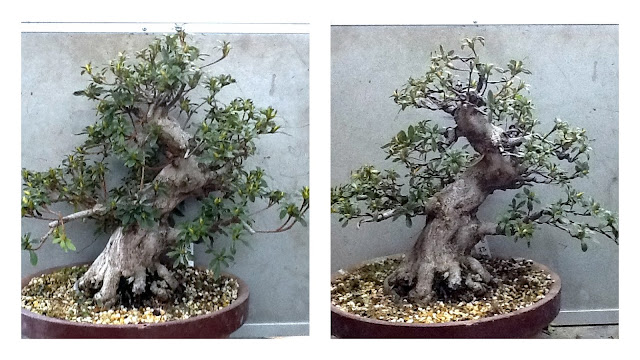 Initial styling of Azaleas is always like this, branch selection and set a skeleton.  New shoots this spring will begin to fill up the branches, after flowering the whole tree will get pruned again, new shoots will fill up the tree....within three years it should be up to being exhibited.  This sort of work was my bread and butter for so many years, Although I don't work on many raw azaleas outside of Japan, I could still knock that one out in less than twenty minutes.

Even quicker than that was this one cut transformation....showing that 90% of making a good bonsai is finding good material.  I rather randomly found myself at some garden centre in the middle of nowhere on the request of Morimae (a long story...) and found a few little gems, including this white pine which after looking at it from different angles, I soon put in my shopping trolley.  The Garden centre was full of material that was over grown, a bit untidy, a bit ugly and some that were just plain weird...so you can imagine I was in heaven. I managed to pick up quite a few trees that I was able to do a little work to and sell on immediately in Japan.  This little bad boy is staying with me...or I should say girl because the folaige type is Nasu Musume, (Literally Daughter of Nasu), which is a great tight little foliage type which doesn't get too long with excessive watering and it back buds fairly well...and it is better than Zuisho or Kokonoe because it feels a little more natural. 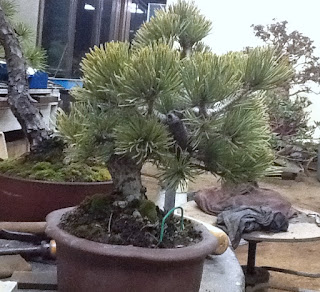 Here it was as I bought it. As Yannick was Kiggen around at the time, I asked him if he liked the tree, he looked at it and said it was so-so, but he was sparing my feelings...I berated him for his inability to see the possibilities that one cut could make...and that he needed to look more at poor quality material as they can offer greater opportunity for making profit.  Most people can take a £1000 tree and make it worth £1100, but a true professional can take a £100 tree and make it worth £1000...and that isnt to say that you are ripping somebody off, charging over the odds, it is to say that you have the ability to find something that no-one has seen and to bring it out.  Look at Mario Komsta's widely appreciated Red Pine, that was in Kokufu 80 and Noelanders this year.  Humble beginnings but worked with a professional eye and ability it has turned into a show stopper.  Now this bad girl won't be at that level, but one snip of the scissors later and... 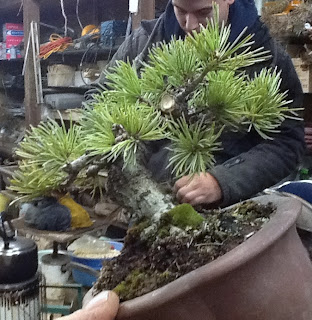 That is Yannick in the background seriously reconsidering his earlier response.  One clip of the scissors is all that took.  It has a bright future as a tight little shohin and will not require much work.  Lesson of the day, take your time looking through the "bargain basement".  Don't dismiss material because it is cheap, dismiss it if it has no good future.  There are plenty of trees at £1000 that have no future for one reason or another.  For once, this tree is not for sale and will be featuring later on I hope.  I have begun to stockpile some of my own trees...

Well...anyone who has made it through to the end of the post, well done.  I will carry on catching up at some point soon...next time it will be the BSA show which was a month and a half ago.  Up to date and finger on the pulse as always.