As I sit here in an airport, I can look back on the last few days which have been a learning experience for me. Somethings have been revelations, others simply what I already knew but spelled out in front of me for the first time. Techniques such as wiring are learnt by repetition and have become part of my physical memory as opposed to the conscious part of my easily distracted brain.
At the first Bonsai Colloquium (I had to look it up) in Rochester NY, organised by the half centurion Bill Valavanis, the artiste de jour and all round good egg Ryan Neil gave a very interesting lecture on wiring. Confessing to me that he hadn't prepared much for it, I told him that "if you can't talk for two hours off the cuff about pretty much any topic, then you can't call yourself a professional"...I think that I was trying to convince myself more than him, but he smiled and got on with it in the consummate way that he has. During the hour that he spoke on wiring I learnt that putting into words that which I knew innately as physical memory, gleaned over years of repetition; was actually very very difficult. It also highlights the fact that fundamental techniques such as wiring, repotting, and pruning can only be learnt properly through repetition, repetition and more of the above. It was the line


When wiring branches in pairs, one of the wires goes clockwise and the other counter clockwise

Followed by me air-wiring a pair of branches, that made me go....oh yeah. It seems so obvious but yet I had never actually said it myself.
My own talks consisted of a compressed hour of Japanese Aesthetics and a satsuki demonstration. I had a powerpoint and a sleepy audience for one and the ability to talk for ages on the other. I would have taken pictures of the demo tree but it didn't seem appropriate.
Being in the audience for other speakers gives a lot of food for thought, not only on the topic but also the delivery. Last night the inimitable David DeGroot gave a talk at the Upstate NY club evening that I was allowed to sit in on. For those who don't know David, shame on you. During the first half of his talk I took a great number of notes and some of the things he said were very interesting.


Art is something which creates emotional or intellectual satisfaction 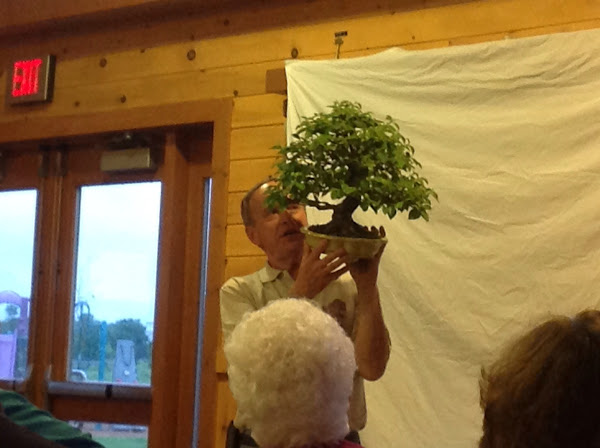 The best description he gave though really made me think hard.

So by extrapolation, we do not look at a bonsai to see a tree in a pot?
....and wait for it....BOOM! It may not be the deepest and most metaphysical thing I have ever thought, but damn that is true. 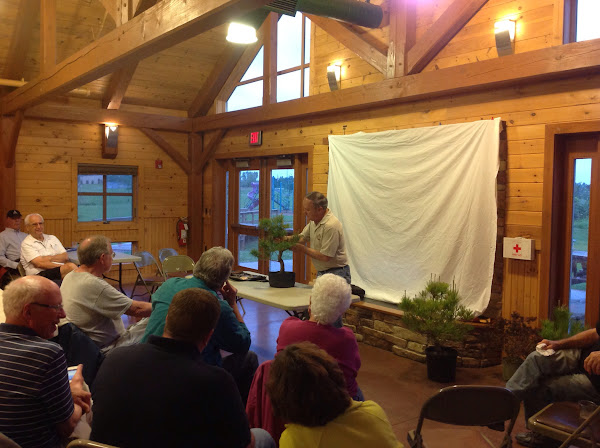 David "whacking off" a black pine.

It wasn't just intellectually stimulation that was to be had, one of the speakers, Dennis Makashima, managed to make a few of us silently cry with his repeated description of his pruning technique...see above for details.

Overall the experience and conversations have lead me to a re-think in terms of how education in bonsai could be approached. Seeing the level in the US rise so quickly for some, those dedicated few, it has to be replicated at home. For those in the UK, how would you like to be educated? Is there demand for the highest level intellectual and technical rigour? Are there people dedicated enough to practice, practice, practice? Who is willing to take on some new challenges and push the boundaries of what is possible in the UK?

Is this the joker to do it? 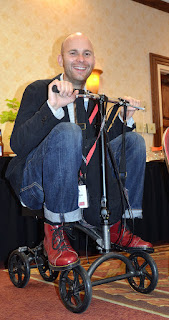 See what happens when a bonsai professional has too much free time on his hands? When will my plane leave? Cursed loose rivet.
Posted by Peter Warren at 23:08