A morning of work at home...

After a trying return back to the motherland, no thanks to British Airways cancelling flights on me, I managed to catch up with all the stuff I needed to and actually get some work done on some of my own tree. I spent half the day Thursday just cleaning up, and then Friday morning I actually sat down and got the tools out for a little while.  Some of it was just maintenance work but I set two bits of material off in the right direction as well....and guess what I bought a new camera! Well, I say new, but it is actually refurbished.

The first job was to correct a school boy error which had gone on unnoticed due to me never being around to see the flowers.  The Azalea below is actually the one which featured in Bonsai Focus last issue, with me working on it over the course of 4 years or so to take it from a stump to little tree.  Some people have said that I cut azaleas back too hard, criticised the video I made with Bonsai Basho and all sorts, to them I say tosh. Full of leaf and flower year after year. It is precisely because I cut back that the tree is so healthy.  Sadly I didn't check on the colour of the flowers...even though I have had the tree for so long, I have never seen the flowers until now...so to myself I say...unpublishable comments. 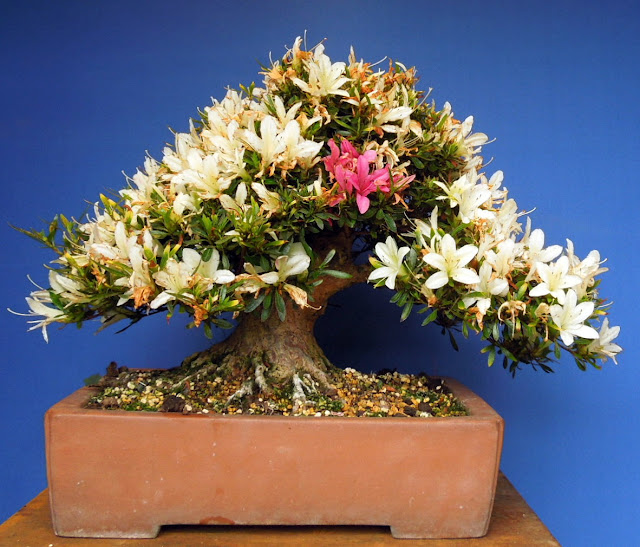 I was told when I got it that it was a Nikko, which is generally a pinky colour, but all one colour with slight variation in hue...So I figured, no need to worry about the flowers too much..  It has the leaves of Korin type which are virtually indistinguishable from Kozan types (to my eye anyway) and so I thought nothing of it and went away, making the tree.  It turns out that it wasn't Nikko after all, and is in fact Hakkurin, which is supposed to be all white, with the occasional shibori (striped/patterned) flower . As you can see there is a big nasty red branch in the way.  The red flowers are in fact Korin, which is one of the parent types...and they can have the tendency to pop out if not controlled.  For regular readers of the blog, this time last year I was struggling with my OCD when it came to Satsuki flowers, and this year it is/was/always the same.  Every year the same...the endless struggle. I should just give in.  Thankfully the contamination was confined to just one branch.

Anyway, the entire branch came off and left a gaping hole.  It was kind of an important branch as it hid the lack of taper in the upper trunk very well.  There are plenty of branches around to compensate and this will be wired in the autumn as October/November is the best time to wire azaleas.
I gave it a slightly more conservative than usual post flower pruning, leaving more leaves on than I normally would.  This is due to the poor growth in the spring due to bad weather.  The next step will be to pinch off any long new growth and then wire the new shoots and old in the autumn. 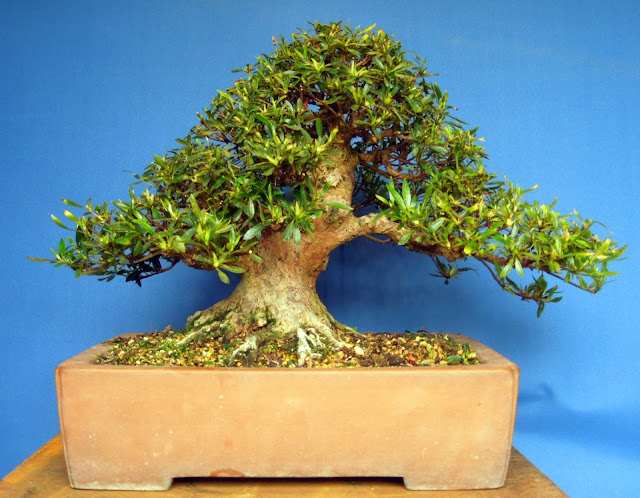 Next up was a trident maple that I picked up recently from Zac's Bonsai, a wholesaler down in Ashford.  He grew this from seed for five years. Pretty good for someone who claims to know very little about bonsai.  When I went down he was complaining that people were baulking at the price. Seems some people can't find a diamond in the rough or are unwilling to play the long game.  Tune in after 15 or 20 years and this will be awesome.... It had been cut back once by Zac, he left the long sacrificial branch on at the top. 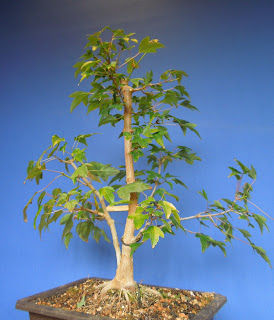 After five minutes, it looked a little lighter. I reduced the height down another notch and did some basic branch selection.  A couple of sacrificial branches are left on either side and one in the apex.  Nice home made nebari.  A keeper...but aren't they all? I wonder if this counts as a native/non-imported tree?

Speaking of keepers, I did some initial work on a small kifu sized Sabina that arrived a year ago.  Having established itself and showing signs of some serious healthy growth...look at those green tips....I decided that I should start styling up some of them. I had only an hour and a bit before I had to leave for an appointment but the major work, defining the live vein, choosing a style/front, initial branch selection and rough wiring were completed. 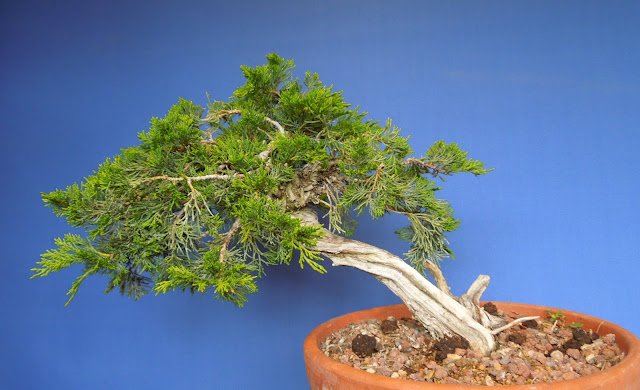 Light green tips all over the tree, almost every branch was growing.  This side was looking initially like the more suitable front. Ideal branch placement for the apex and for a variety of different possibilities. Interesting twisted feel to the live vein in the lower trunk, moving up into a bit of a mess up top. Strong jin at the base adds character. 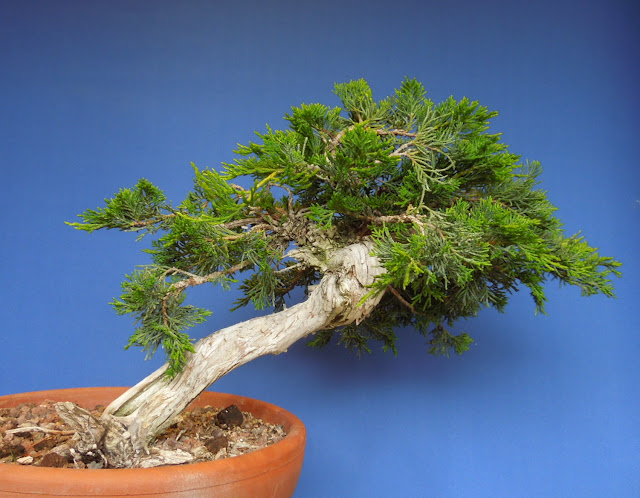 The back side.  There is a potentially interesting twist featuring dead wood in the top section of the tree, but the lower trunk is boring and the base jin bit sticks in the eye. Foliage and apex are all perfectly usable from this side.   First job was to define the live vein and figure out where the living bits are.  Once you know that, then you can start to consider the actual design. The weird knuckle/twist on the back side turned out to be quite dull when the dead section was defined, the live vein movement was pretty poor, whereas from teh initial front, the twisted nature was actually accentuated. 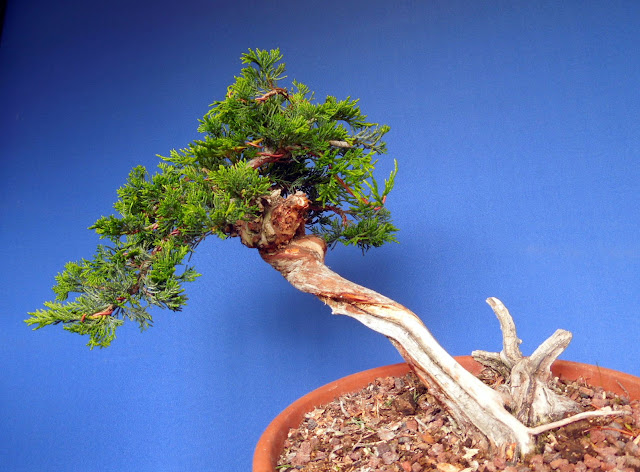 After a few branches were wired. I think there are six wires on the whole tree.  About 40% of the foliage mass was reduced, so all of the remaining foliage was left to grow. None of the growing tips were cut back at this stage.   Working with Yamadori Junipers, especially those who send out multiple shoots from a single node, especially on the trunk, requires a totally different mindset to working with field or pot grown Itoigawa.  It basically comes down to a mental process of planning the future and understanding the process that are occurring and how to use them to maximise development without creating stress on the tree. I would say more but then I would find it difficult to sell a workshop on Junipers.

I will work on the dead wood when I can get the dremel wire brush out and fine wire if and when necessary. For now the next stage is to let it grow out a little. Not too much in certain areas, but try to not touch it for a while...let those growing tips grow.  This tree will reappear a little in the next couple of months I feel...assuming it doesn't die.

It was nice to work at home, get stuff done for once.  I think I may do it again next week...