Further along the trip

It's either feast or famine with this blog malarkey. Day four of the trip saw the longest day, starting off with three nurseries in the Osaka area. We drove from Kyoto and I saw this in the car park of a service area and knew we were going to have a good day. 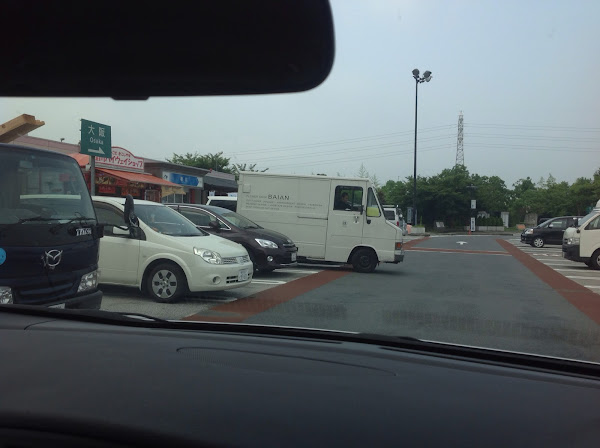 Probably the only other hot dog van in Japan the same as the one my kohai Fukudate drives. I wonder if that clutch is just as slippy? Its the only manual I have ever driven that doesn't stall in first if you let go of the clutch.

After a short drive we started off with the now very famous Fujikawa Kouka-en where the ace video maker Bjorn arrived on his mama-chari bicycle. (Sadly no picture). Again in a similar way to Aichi-en, due to the lack of space, Fujikawa's nursery is more practical than aesthetic, but he certainly had a great range of trees there. 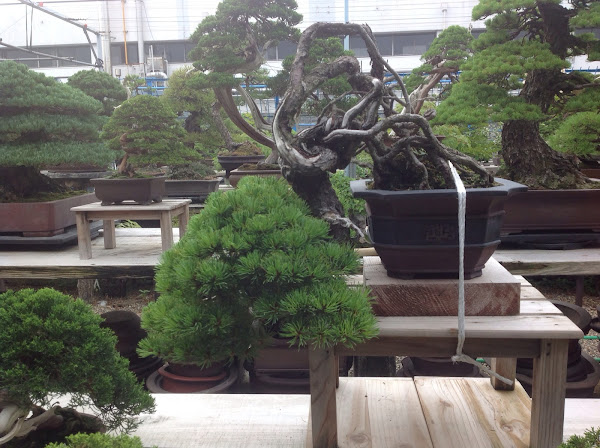 A cascade exposed root white pine. Look at the balance between the trunk and the roots, here ot is so much better than the one from a couple of days ago. A very nice tree and styled in a very attractive Fujikawa style. 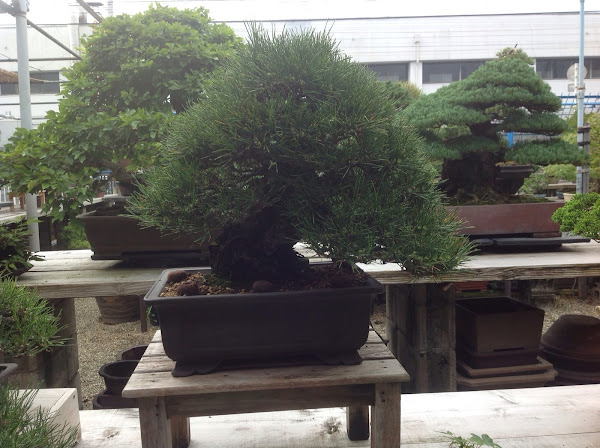 A large kifu/small chuhin Black Pine. Again the styling is very characteristic...and I mean that in a good way. 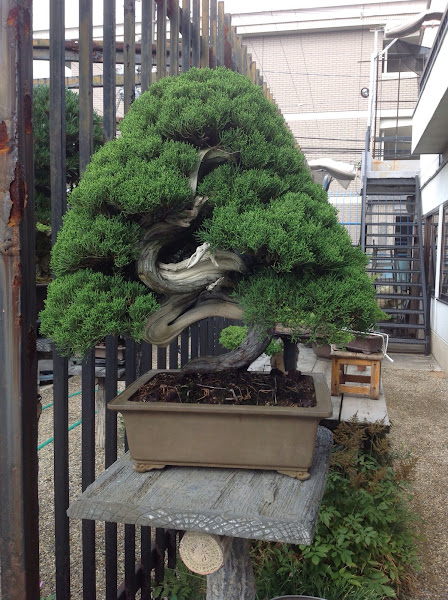 A bushy, twisting yamadori itoigawa. I spent a while looking at this thinking I would chop at least half it off and make a lovely tree from it. If only I could afford it... 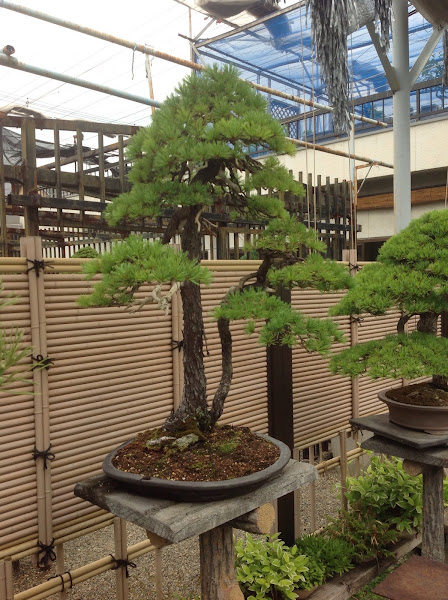 An elegant twin trunk White Pine. Fujikawa-san has an eye for these kind of trees, one of the reasons I like him...plus he is a riot when he has a shandy or two. 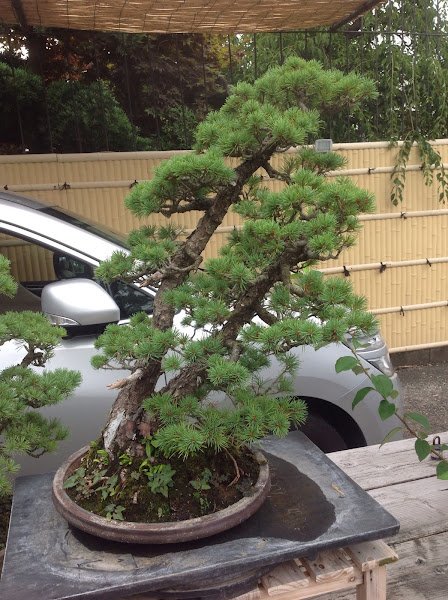 And in the back ground you can see the El Grand P-Diddy mobile. Our home for the week. It got tighter and tighter as more and more pots and stands got packed in there. I told the guys to pack light but with all their stuff, it was a tight fit. I enjoyed the drive however and despite it listing to the left, it was a pleasure. It had one of those electronic dashboard things that gives you the fuel consumption. I saw it as a challenge to take it from 7.4 km/l to 7.8 by the end of the trip...I am the eco-king (i have to do something to off set all those miles I fly...give me a little something)

The second trip was a bonsai supermarket, Yosho-en, not too far away from Mr. Fujikawa's. it was just a sea of tress. Mainly cheap stuff, but some good things. The owner I knew vaguely and we had one of those awkward conversations where neither of us could remember each others name but knew we had met before and should be meeting again in the future. He was pretty cool after a while though. 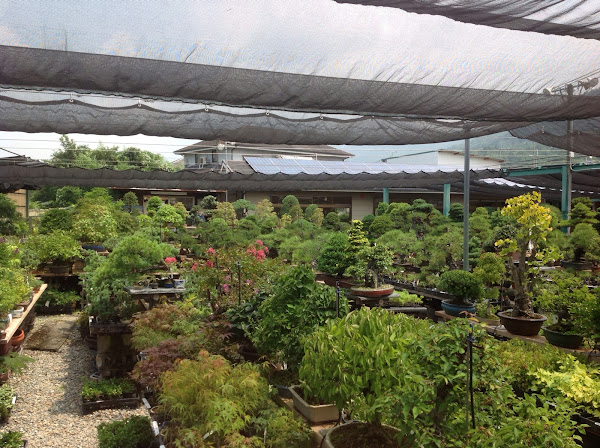 Too hot to look through them all. 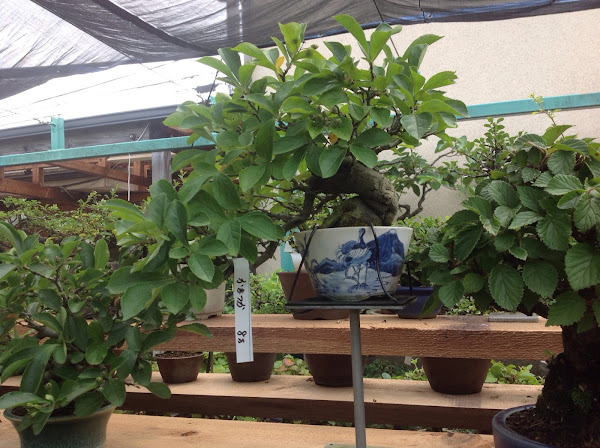 Possibly the thickest shohin Kamatsuka (pourthiea villosa)???? I have ever seen. Sweet.

We carried on stopping for a convenience store lunch (why waste time) and then up a steep winding road to the back of beyond to Baijyu-en. A lovely little nursery in the middle of nowhere. Mr. Miura, the owner is a top guy and he knows me from a few shandies we shared at an auction last year, amongst other things. A lovely picturesque garden but it was hotter than hell when we there. 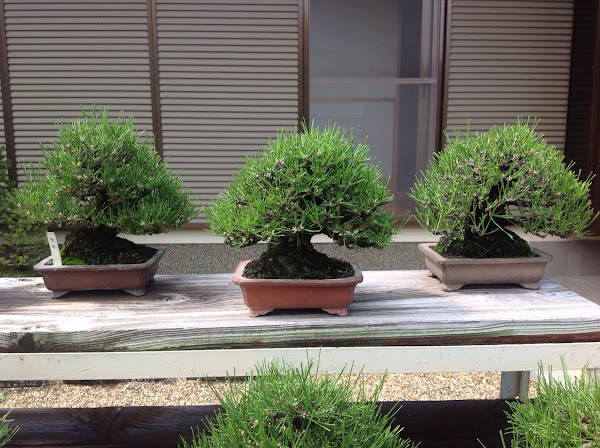 A trio of black pines...which to pick? Very often there are batches of trees, made by the same guy in the same way and you will see the same pattern in a number of them. This is something very common to shohin bonsai, due in part to it's semi-pro base of enthusiasts. 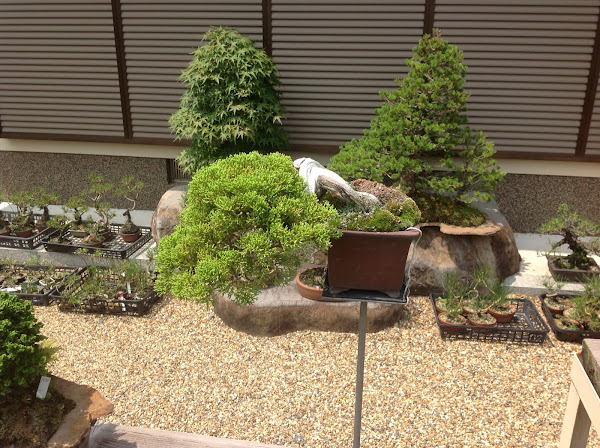 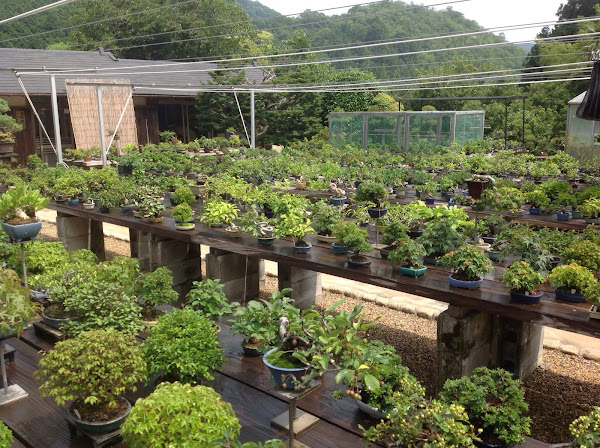 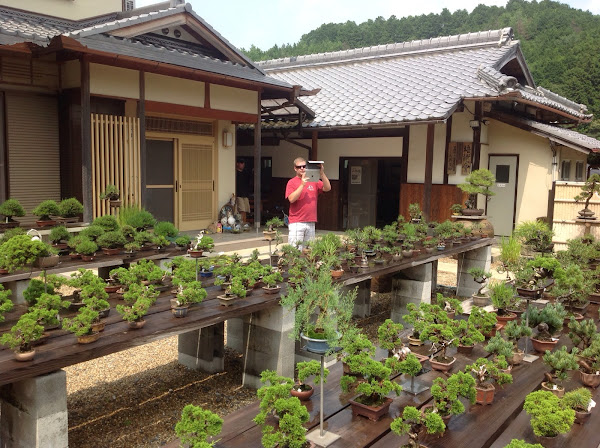 The ipad proves an unwieldy camera. 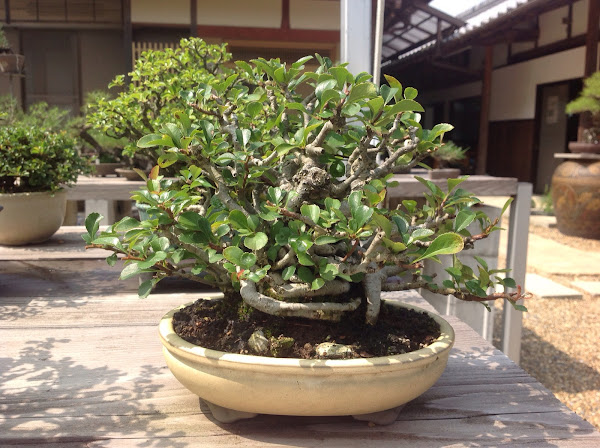 A white chojubai...well so I was told. I would love a good one of those...

After copious cups of cool tea and a chat we headed towards Nagano, with a stop at a nursery of a guy I like and always buy something from at Kokufu, Mr. Oota in Suzuka, Mie Pref. he is a true bonsai lover and his eyes lit up as he was showing us all around and telling us how he had cut this tree in half, grafted this that and the other and it was a pleasure to share in his works. His garden is set in quite rural, agricultural land and a bamboo edged forest created a lovely background. 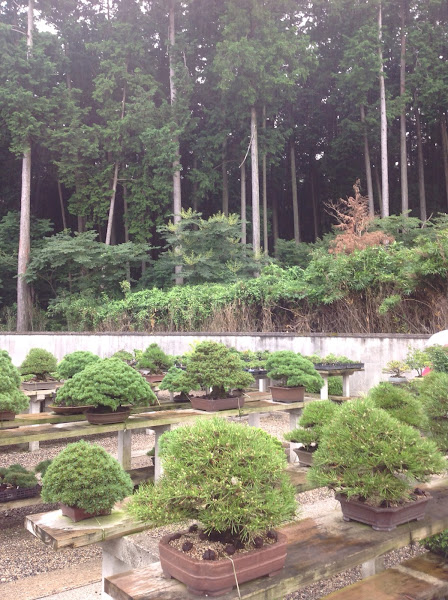 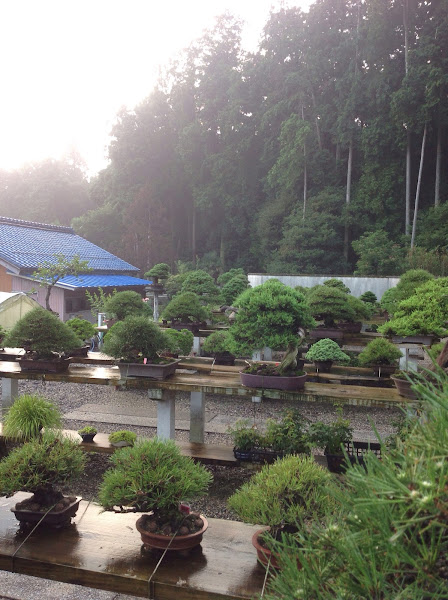 Some of his trees... 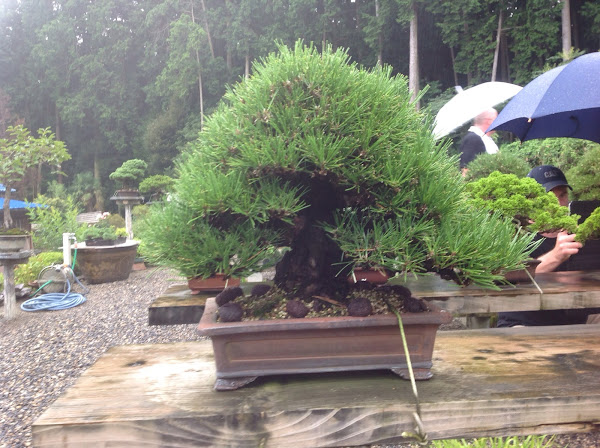 Look out for this at next years kokufu... 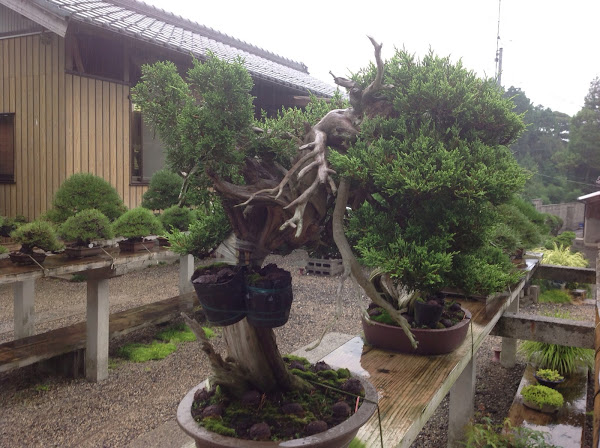 Root graftin to create a chuhin sized tree. Root grafts are generally done with Kishu type foliage as opposed to itoigawa. They are considered to be slightly stronger. 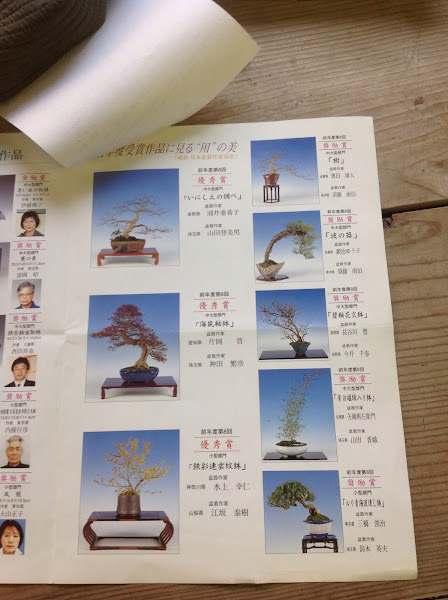 One thing I did find there was a leaflet from a pot exhibition that was organised by the Takagi museum and the Sakka Kyokai when it was strong. They invited contemporary ceramic artists to create bonsai pots and matched them with trees from established artists such as the Chief, Sudo and Yamada. This was a pretty revolutionary idea and I managed to see two in my time before it all finished at the museum. It was a great exhibition and the idea was just completely contrary to the traditional image of Japanese Bonsai. The ceramic artists brought something new and invigorating to the art and forced the bonsai professionals to think outside the box. Personally it is an idea that I wish had continued...if only someone else would do such a thing. Making bonsai contemporary? Crazy talk. 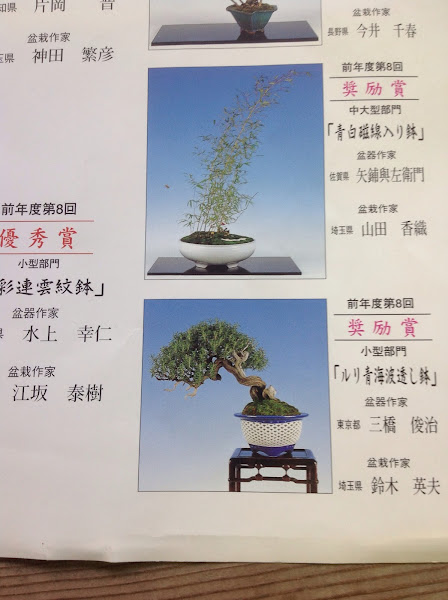 Oh yeah, check out the rosemary...one of the most underrated species for bonsai. 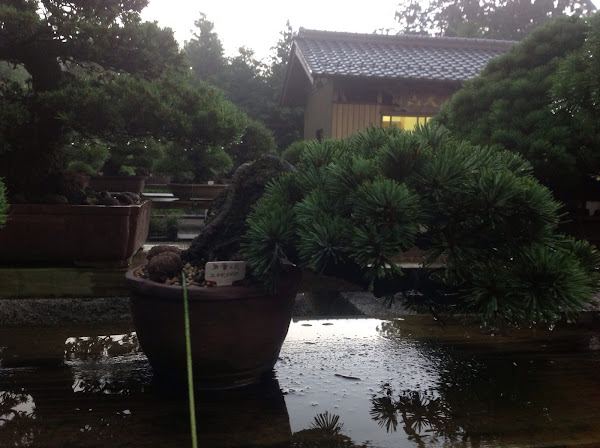 Rain curtailed our visit and we had to be making tracks, a four hour trip to the hotel near to Obuse. I am amazed we made it without crashing. It was only listening to Depeche Mode via youtube that kept me awake.

More later on...might be next week as Crawley looms large on the horizon, like a fly on the windscreen...