The trip is over..

And it proved very hard to update as I went along...perhaps something to do with the baking heat and 1800 km I drove. The rental car place (and to be fair, me) was pretty surprised when I finally got it back in one piece. All good fun though.
So after the first day in Kanagawa and Shizuoka visiting a few shohin nurseries, we ventured on to Okazaki for a day in and around Nagoya which is home to the Daijyuen crew. Daijyuen is an old nursery dating back three generations, with the current master Mr. Toru Suzuki at the helm. Our guide for the day was Ken Fujiwara, a pretty cool dude who studied at Daijyuen after being a surfer around the world. Click his name for a link. 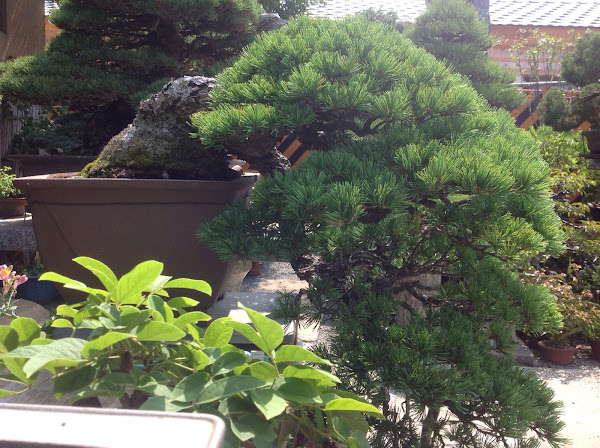 This was the only tree I took a picture of there, a very nice cascade white pine. I spent most of the time talking with Ken, so there you have it. A tree.
Next we went to Shinpuku-ji, a nearby temple that has a bonsai loving head abbot. There is an area for trees on display and we got a peek into the back garden. 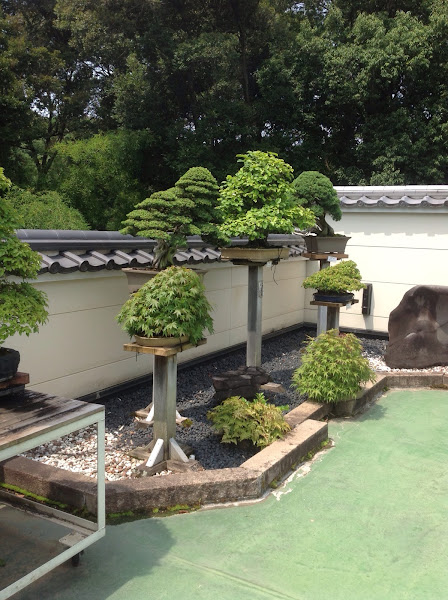 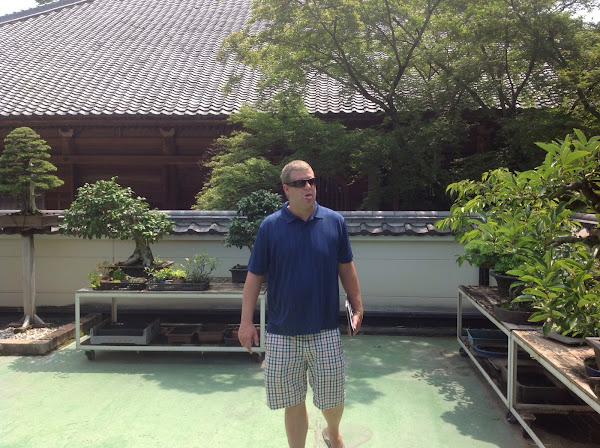 A very hot Matt Ouwinga. The big daddy of the trip. 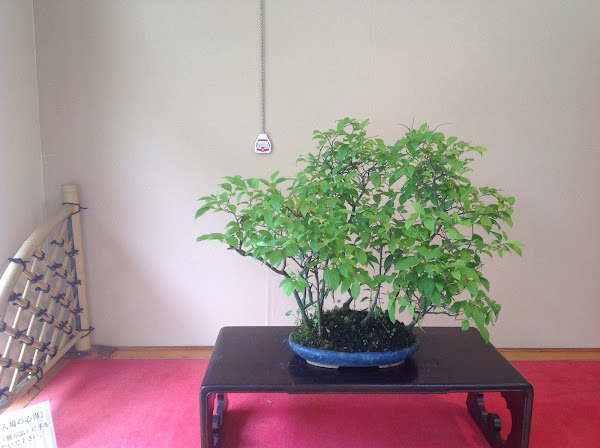 I spent a while contemplating the meaning of the scroll, before I figured that it was just a pulley for the blinds above. 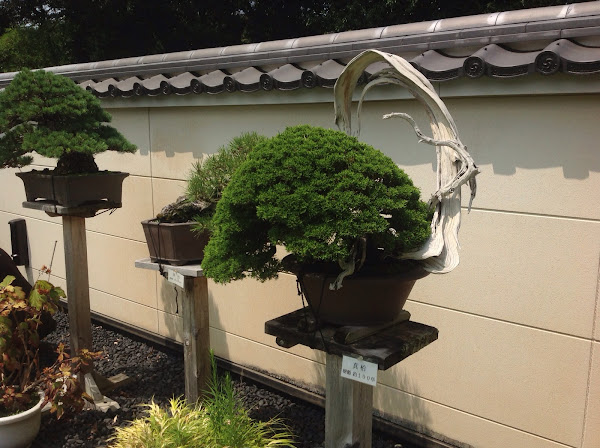 An interesting juniper. The trees at Shinpuku-ji were originally looked after by Mr. Kamiya, (or so I was told by the chief) who was in his day a pretty pimp-ass bonsai professional. His son was an apprentice at Shunkaen before my time, and I met him a couple of times before his untimely early departure from this earthly coil. His father made some great trees and you can see the influence here. 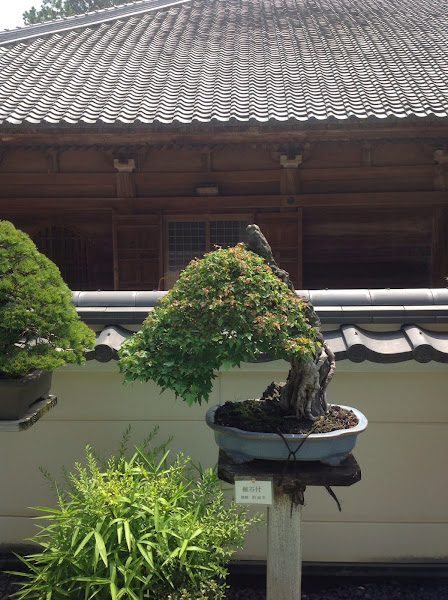 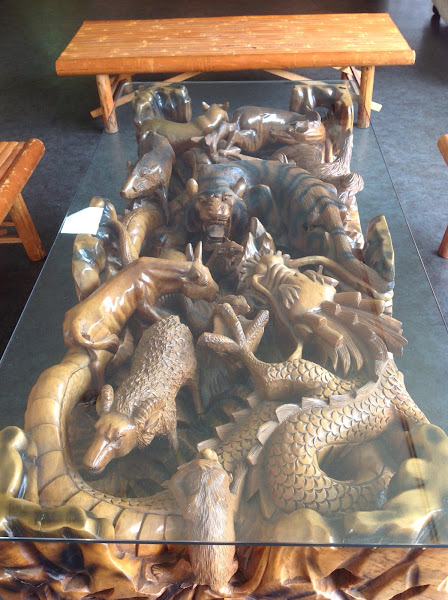 I think this made the biggest impression on me. A superb lump of wood.
After a brief lunch stop it was onto Aichi-en, the home of Junichiro Tanaka, where Peter Tea studied for two years before returning to become a professional. At the moment there are three foreign apprentices there including the all round good egg, John Milton, a fellow Brit, who has just started his studies. We had. Chat about the Ashes, the off season and Snooker...I could tell he still had that homesick longing that takes six months to get rid of. I remember it well...wait until you have Sushi for your first Christmas day dinner away, then you know what homesick is about...still, I'm sure he will do well, and Mr. Tanaka is a good bloke it seems, so good luck to you.
Aichi-en is very much a growers garden, it isn't pretty and well laid out, but it is full of trees in various stages of development. Mr. Tanaka is a maker of trees as opposed to just a seller of trees...in fact ot was quite hard to get him to sell some. 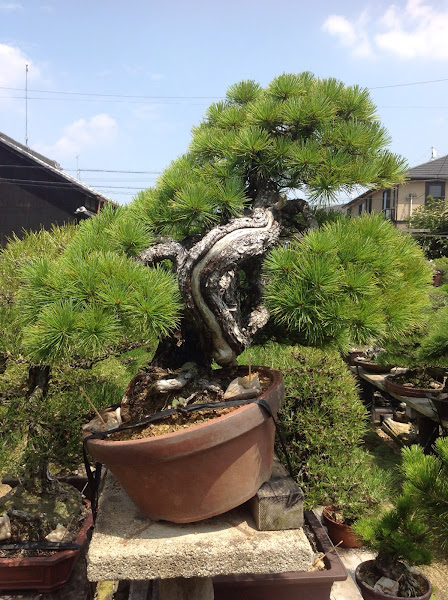 This was a truly funky tree that I very much enjoyed. Could be viewed from 360 degrees and you were still trying to figure out where it looked best from 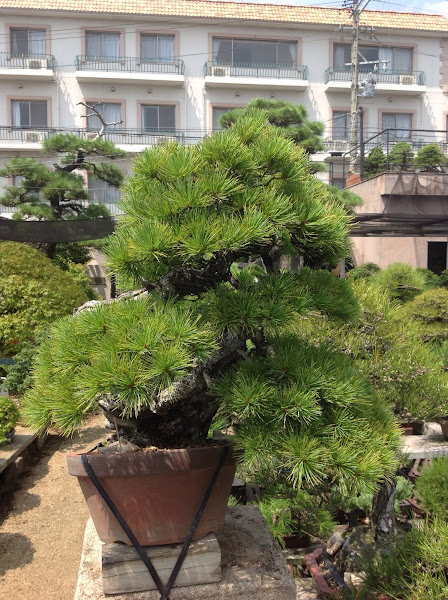 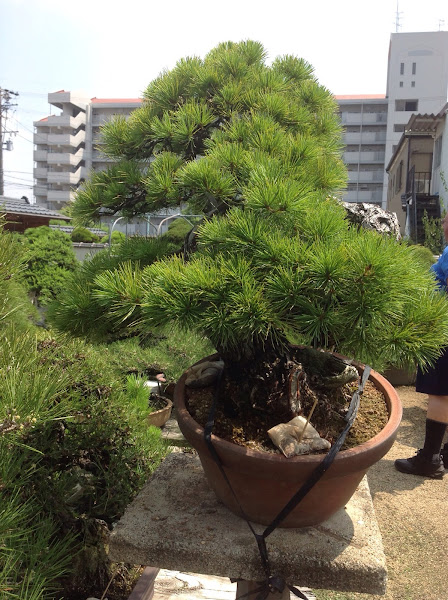 Obviously with a bit of work done to it mind... 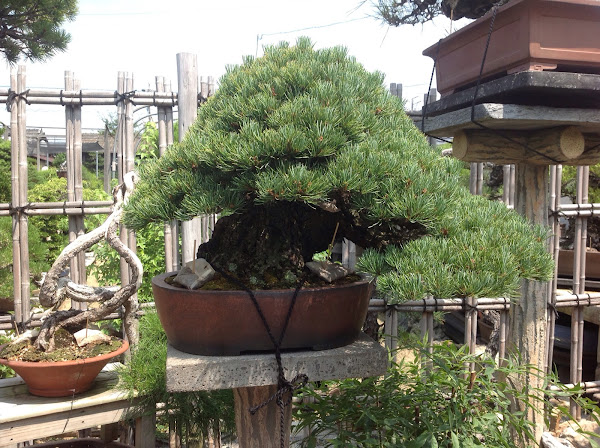 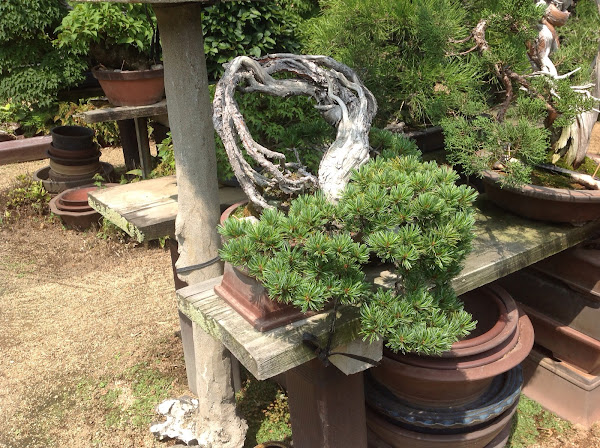 And a wave like exposed root white pine, with great Shari and deadwood. A little over heavy on the upper trunk section which is a common feature with exposed root trees like this. A perfectly balanced one is are and you tend to get inverse taper. One without would command a royal price.
One of the main reasons for meeting up with Ken and going to Achi-en was so that Matt could see the tree that he put into Kokufu this year. A trident over rock which had been started by Aichi-en many years ago. Here is a terrible picture of Matt, Ken and John trying to stay out of shot. 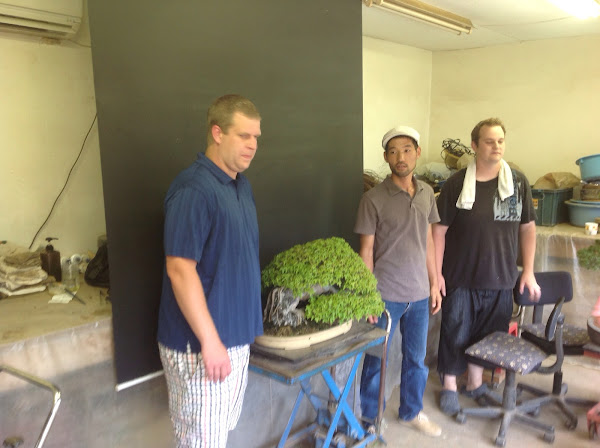 I'm an awesome cameraman. Thankfully one of the group took lots of pictures so I will get those one day.
The day was rounded off with a trip to Inazawa which is a growing area for garden trees near Nagoya which has a few bonsai nurseries. I bought a tree that I couldn't pass up for the price as it ticked three very major boxes... 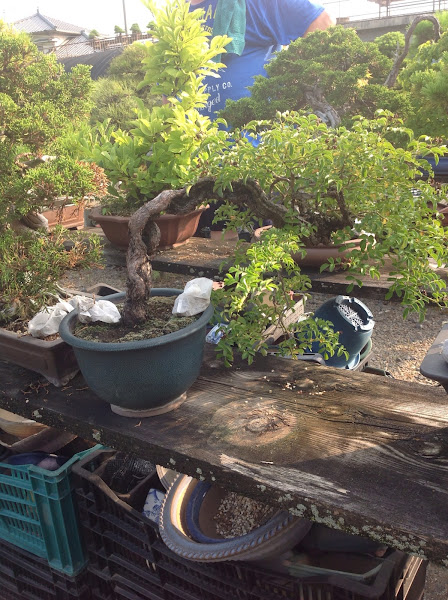 One, it was relatively cheap. Two, just look at it...there is no way that will sell. Three, it's a rose. I have an unhealthy addiction to Rose bonsai, lord knows why, but I do. It will be kept at Akiyama's until Kokufu time when I will ty and sell it at the Green Club...and fail...but with a bit of work and five years...it will be even better! Keep your eyes peeled in the future for it.
The days bonsai finished, we loaded up and headed to Kyoto, arriving at the incredibly reasonably price Hotel Rich Kyoto. Tomorrow...the mecca for shohin bonsai Koju-en