Repotting season is upon us...

Buds are moving, trees are waking up and the clocking ticking on some species. Today I finally got to repot some of my own trees. It has been a while...but this year I have booked more time at home and now with the book all but finished, I managed to work on a few trees that were in need of it.

One tree in particularly I had been looking forward to repotting was a maple I had picked up a year or two ago from David Prescott. Grown from seed and most importantly, it had been given a start by someone who knows bonsai very well. I thought I may have to do a bit of root work because it had been in the plastic tray for at least three years...which is about the limit for young deciduous trees. Needless to say i didnt take any before pics, but what really impressed me with this tree was the sheer quality of the root system and the near flawless nebari that had been home grown. Who says you need to import trees to get quality. If you are prepared to wait for twenty years, you can get an incredible nebari from home made trees. Just look at the deciduous trees over in Northern Ireland. 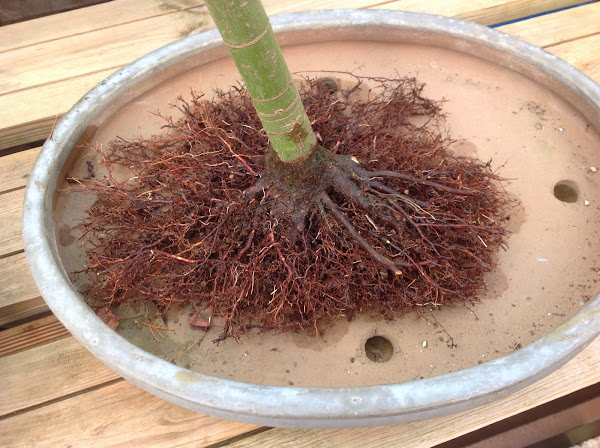 Trying it out in a few pots...should I. Give it space to grow and thicken up? Naaah... 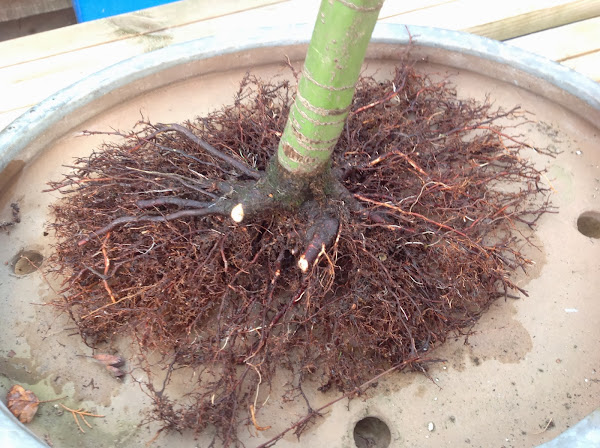 The only flaw in the nebari was round the back. Two strong roots had started to dominate and squeezed out the central section. Both strong bits have been pruned back hard, the weaker section has been teased out and I will remember this ever time I fertilise (honest I will) and place a piece where those weaker roots are. 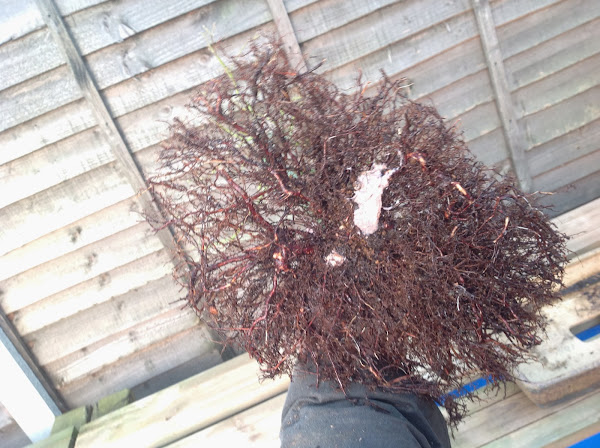 The bottom, a bit of chopping done, hence the grey streak of wound sealant, otherwise as flat as a pancake, which is less flat than Kansas. (A fact we confirmed when on our now mythical truck jouney) 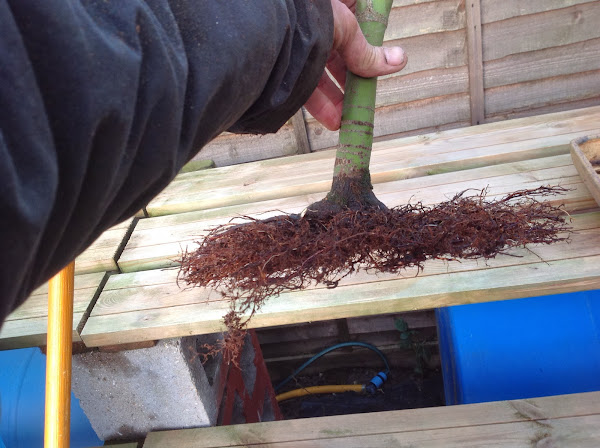 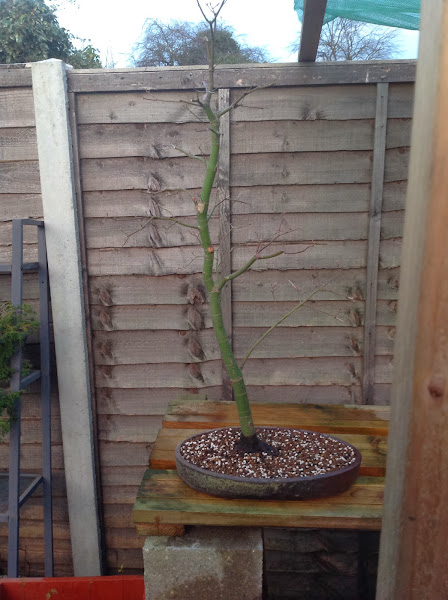 Potted up in a pot I got up at Willowbog. It had a zelkova in it, but it is a lovely narrow semi glazed pot. The lower most branch is a sacrificial branch and the apex needs a little work, otherwise, the natural movement and branch placements are pretty good. It is not the most impressive tree yet, but it is definitely one that wont be leaving my garden unless I get a ridiculous offer. Trees like this don't come along everyday.

I thought for the first time the other day that maybe having an apprentice would be a good idea. During my time at the Chief's when we bought soil, we bought a van load. One time I went with one of the young lads and we bought what we calculated to be roughly 2 metric tonnes of soil which we put in a van that should only legal carry 1. The soil merchants even told us that we shouldnt but hell, we were foolish. The Hiace van, which has just the other week given up the ghost and died (R.I.P), groaned and struggled its way home and I dared not drive quickly. Unloading the van took very little time because there were four apprentices at the time and so heavy work was quickly finished.

Kind of in the same vein, but much less damaging to my own van, I went to stock up on soil the other day and got a little bit enthusiastic. I have enough Pumice to repot all of my trees and Mike Hagedorns... Add to that Akadama, Ezo Grit, Lava rock and a bit of Molaar and I had what is commonly know in the trade as a kangoofull of soil. Shifting it from van to garden, huffing and puffing I thought to myself, "I wish I had a bitch to do this for me....I mean apprentice..."

More dirty fun tomorrow and then Paris this weekend...