Since the Chief became the unofficial and then the official Chairman of the Nippon Suiseki Association, plans were put in place to put together a massive exhibition at the same time and place as the Kokufu, to get more interest in it. Morimae was a driving force behind it along with the Chief and I heard both of them beating the drum in november saying how good it would be. They are both renowned for "big talk" and so I was a little sceptical, I was however, very pleasantly surprised when after a day in the snow, I helped put the finishing touches to the show. In the words of Alan Partridge, I got a plate with my words and a knife and fork...what I'm trying to say is I ate my words.

Before the judging there was some concern as to if enough people would be part of it, however the response was incredible with over 50 stones rejected at the judging process. A number of masterpiece stones were requested from temples, aristocratic families and museums. How they managed this is testament to the powers of persuasion from two very enthusiastic and exuberant professionals.

Unfortunately I only got to the show for about an hour during set up and then turing the rapid and accident free break down, so I only got a chance to snap a few pics, but they were mostly of the foreign entrants, all of whom are good friends of mine and fellow pebble gazers. 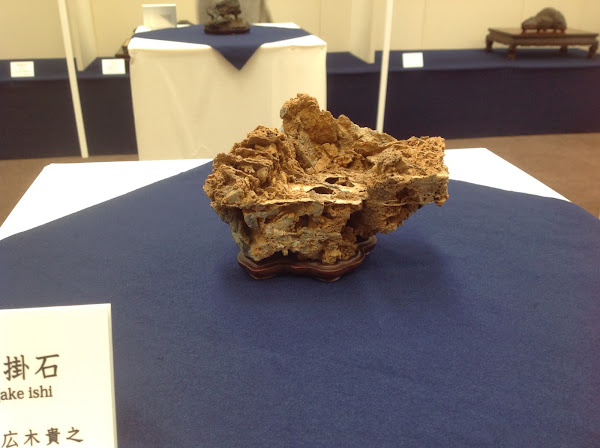 One of my favourites. The texture made a welcome change from the smooth textures I usually purr over 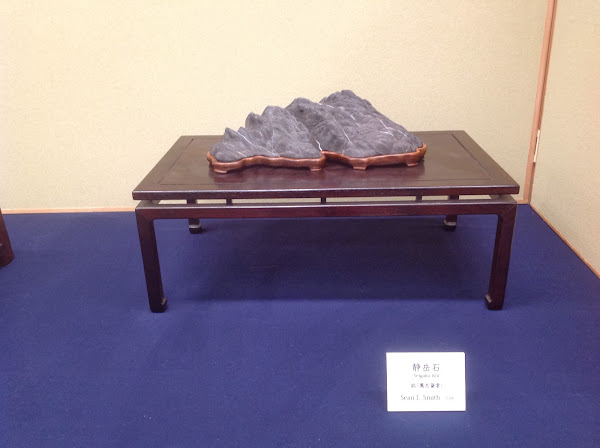 A seigaku ishi from the American Suiseki King and master daiza carver, craftsman and father to one of my besties, Sean Smith 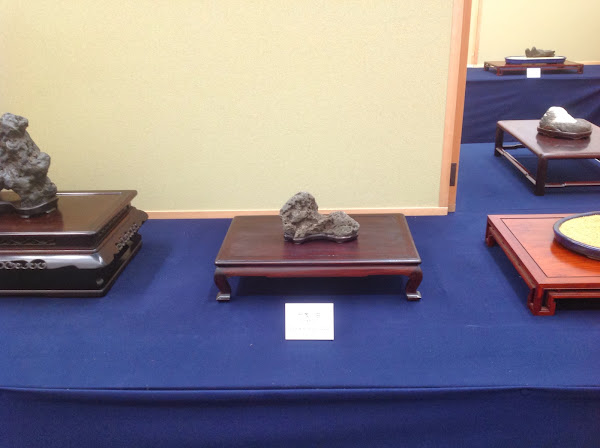 I think this belonged to Martin Pauli...the swiss watchmaker, suiseki enthusiast from an era ago and all round nice guy. My apologies if I'm wrong... 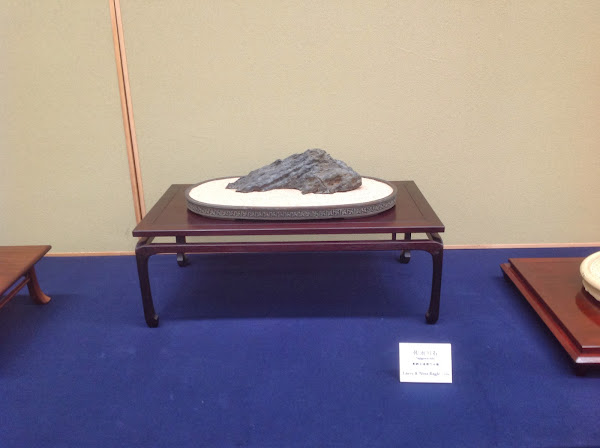 A Sajigawa ishi from Larry and Nina Ragle..two ridiculously enthusiastic pebblers from California. Always a massive pleasure to see them. They publish and run the Aiseki Kai 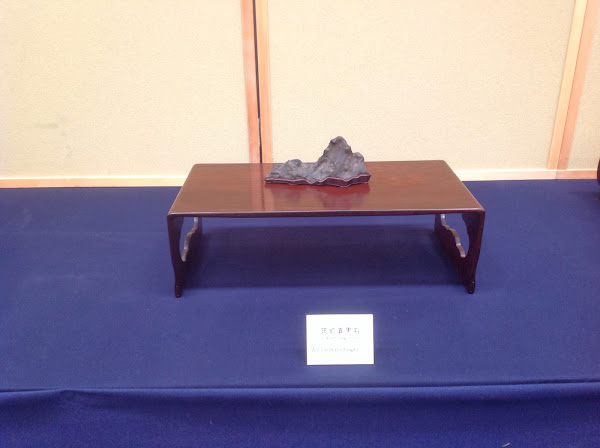 A Chikuzen Maguro ishi from Wil. The biggest and worst influence on me since 2002 :) He has forgotten more about stones than most so called self appointed experts claim to know. 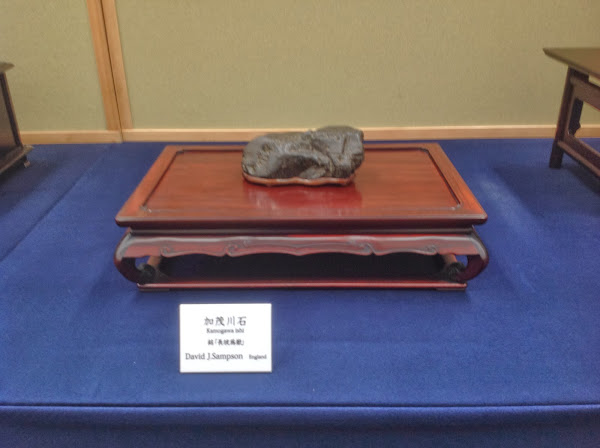 The only entrant from Blighty with an ancient Kamogawa stone that once belong to Yoanken...the suiseki dealer, ex bonsai enthusiast and good bloke, Mr. David J. Sampson 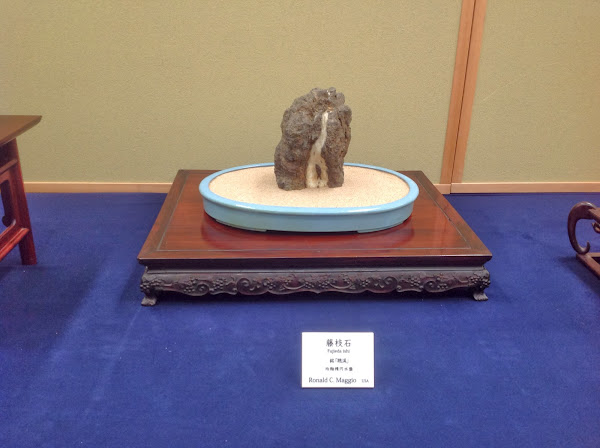 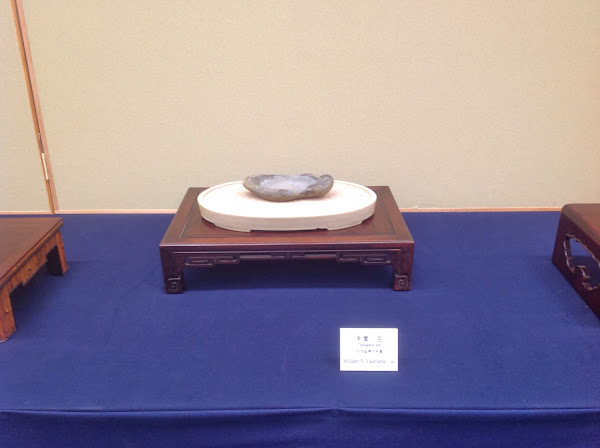 And the irrepresible Bill Valavanis with this mizu-tamari ishi from the Tamagawa.

There were a number of other foreign exhibitors whose pictures I didnt take in the three minutes I had to do so. So my apologies to Hideko Metaxas (althought Japan is her motherland), Dato Chu from Malaysia and Tom Elias from the US. I think that was it. Why no foreign stones I hear all you covertly anti-Japanese pebble freaks say? For the first big show it was decided that the focus would be on Japanese stones and show the public that the appreciation of Japanese rocks had a world wide audience (so the locals had better buck up their ideas). For the next show, as with the other major show in the calendar, the Meihinten, foreign stones will be encouraged if they are to a high enough standard. 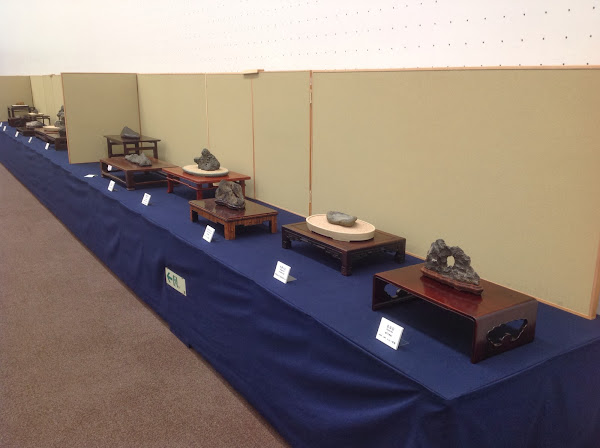 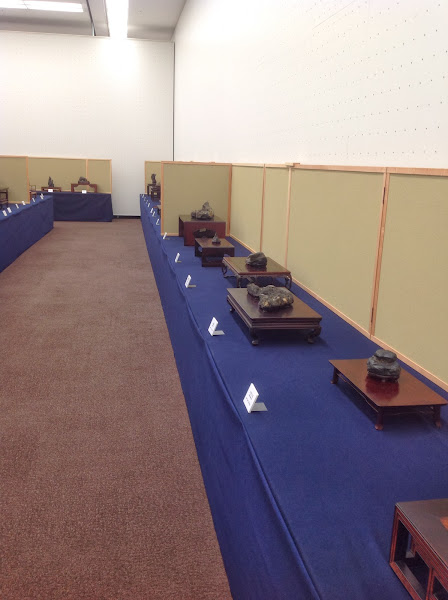 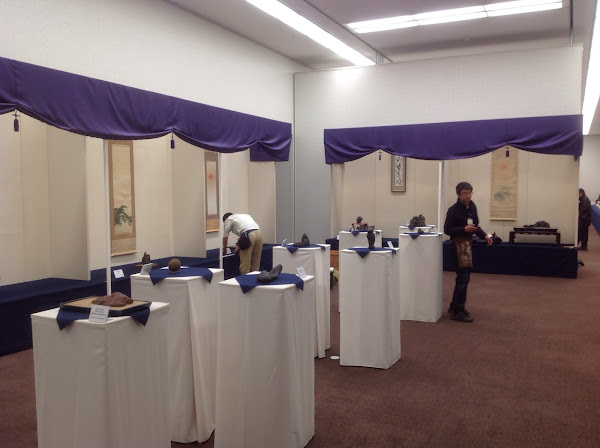 There is Jin trying to look busy without knowing what to do...like most of us. Too many hands and not enough jobs. 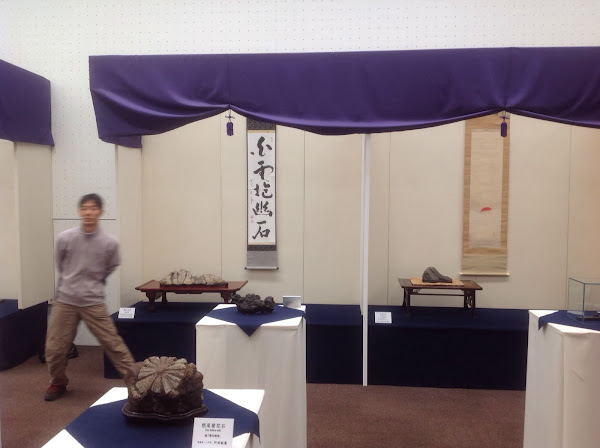 Akiyama blurring out of view. The stone in the back ground is "Haku-un", White clouds...possibly the most famous Setagawa Tora ishi. The Chief had it at Shunkaen for a number of years so I know it well. Previously one of Katayama's most prized possessions. The stone to the right is displayed on a piece of kimono fabric in the way that was done in the Edo period. 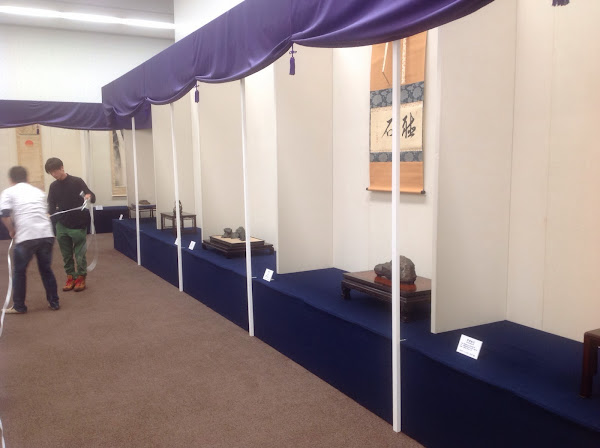 Some of the tokonoma type displays. The design is to be revamped next year to remove the white poles if possible. 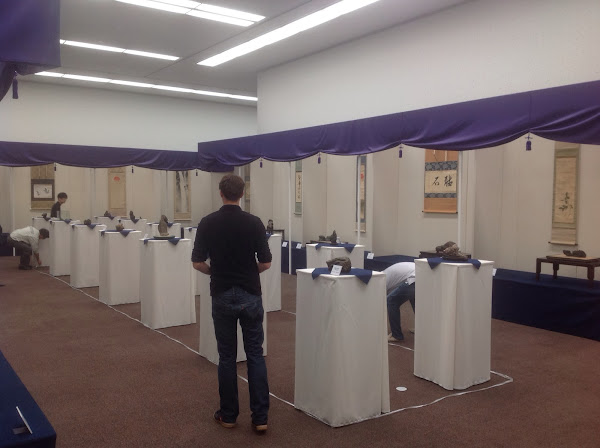 Some of the smaller stones were displayed on pedestals so they don't get lost in the crowd. Valentin too is wondering what more can be done... 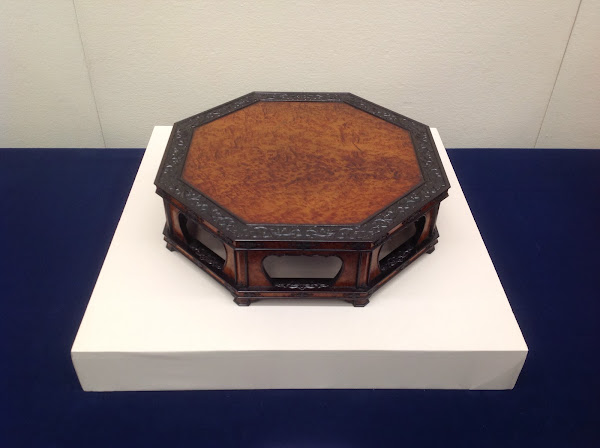 Some famous tools where on show as well... 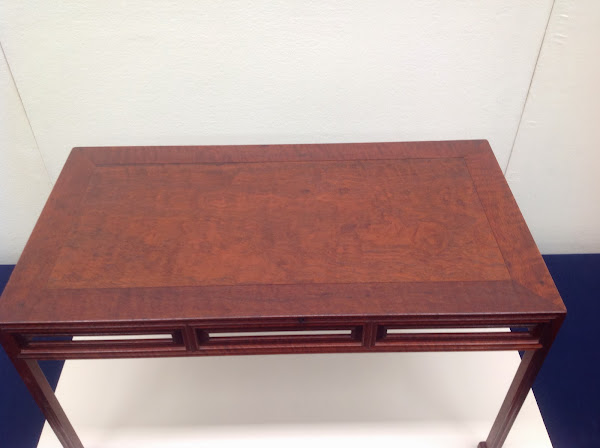 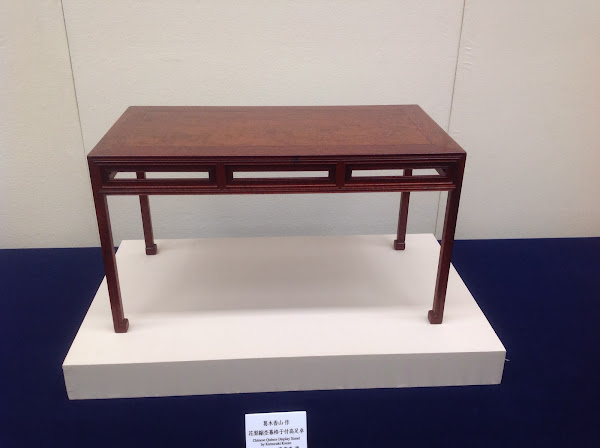 An elegant stand by Kozan... 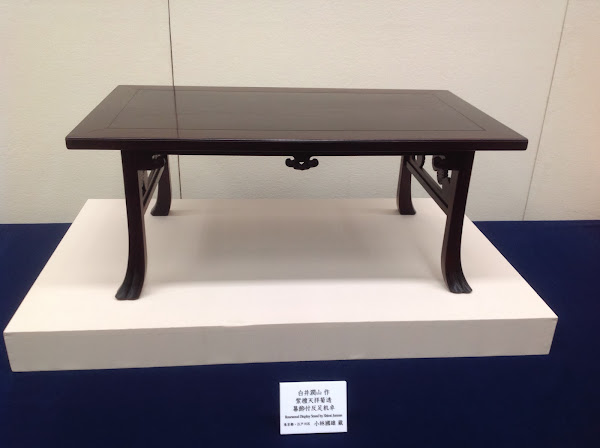 And from the Chief, this Junzan work of supreme craftsmanship. 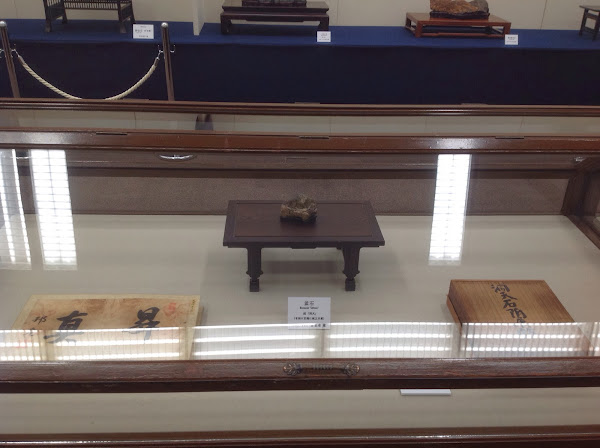 What made the show was seeing in flesh stones that you had only heard about or seen in old books...like Dōten. It was shut away in a glass case because...well, you would be tempted to slip in in your pocket. 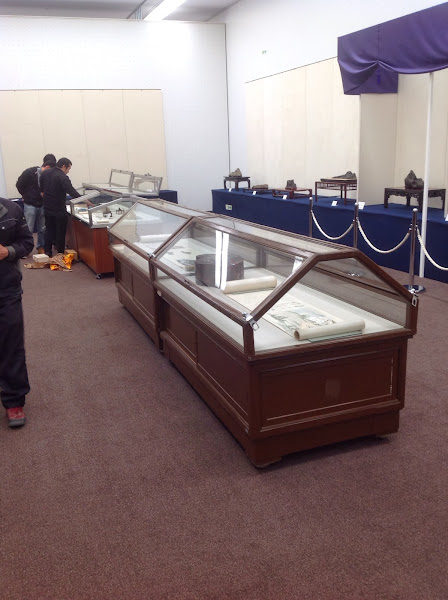 The case in the foreground held the scroll and the case lid for the centrepiece stone from Kenin-ji temple...Kurokamiyama 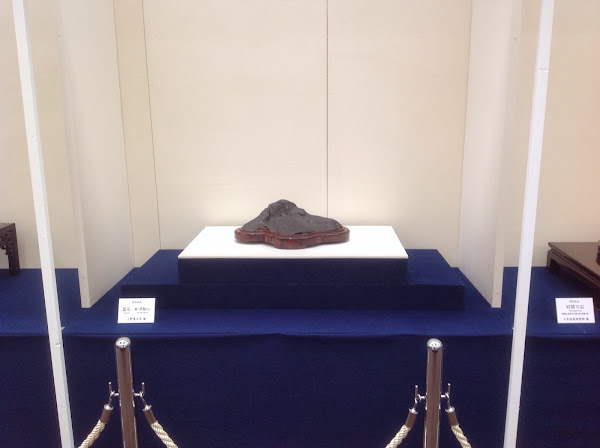 Strange that a bunch of men could get so excited about some rocks, but hey, we all have our weaknesses.

Next year will be hard to beat, but I'm sure they will try. A number of foreign visitors have asked if they can exhibit there next year, so there should be even more non japanese exhibitors and also more than likely non japanese stones. For information then email me or the Association directly before September.

Apart from a thousand and one pictures that are not fit for human consumption, that is it for the kokufu now...back to work and trying to get my garden sorted out...assuming it is still there when I get back. 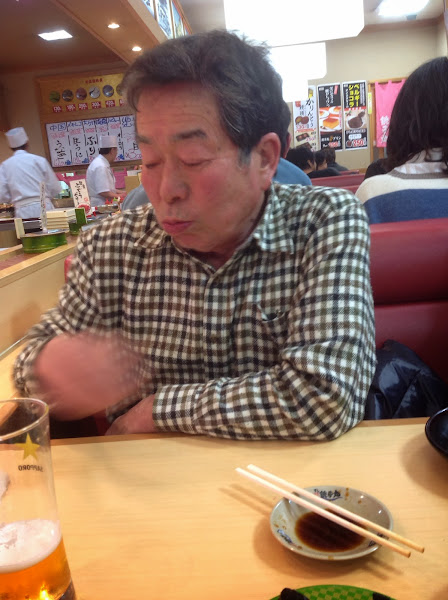