The last two days have seen some dramatic changes to a few trees in Derbyshire, including a couple of trees that several years ago I suggested were a little lacking in drama have finally got to the stage where they reached the limit of their styling and something new was needed.

I do not think that everytime a tree gets worked on it needs to be restyled. I am quite the opposite really...figure out a plan and work towards a definite goal rather than geting impatient and slowly reducing the number of branches each time you flip the front around. One of the problems with bonsai however is that trees grow and you can't stop them. They get out of shape so much that a restyling is necessary...or they fall off the bench and a branch or two dies.

This is an example of one such tree. A root over rock Itoigawa juniper imported from Japan belonging to a client. I have been doing just basic maintenance work on it for the last five years, very little apart from a minor restyle in the autumn of 2012. This is the tree back when it was imported in 2008 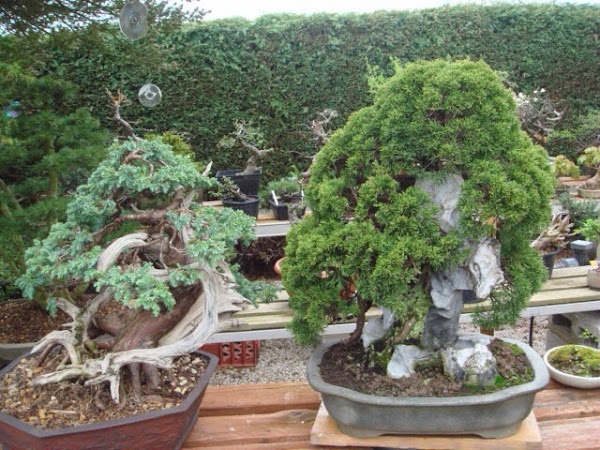 Its the one on the right in case you were wondering. The next photo shows it a couple of years later, recovering from an initial styling by another artist... 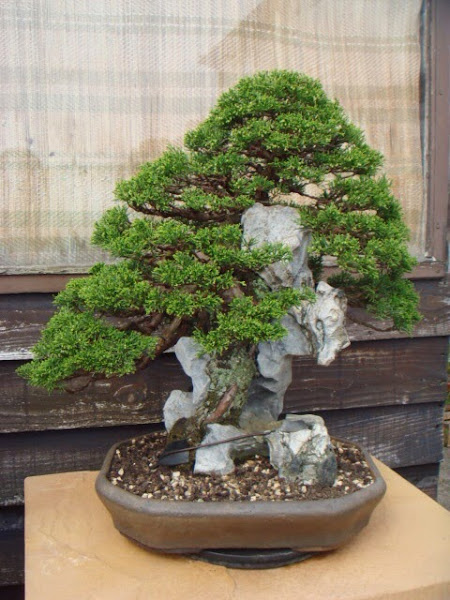 After it recovered, my first major work was to thin it out and just tweak the branches around a little as you can see below. The owner was thinking at the time that something just was not right. I suggested a lack of drama and a touch too much green for such a heavy and jagged rock. "There is a better tree hiding inside". Making big decisions however can be difficult and I am always in favour of the owner coming to their own conclusions. I opened up the front a little and tried to achieve a better balance with the rock. 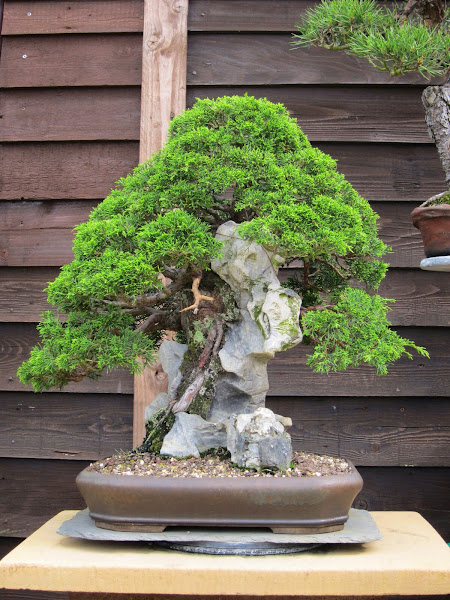 Soon after it became more and more bushy, swallowing up the rock, in need of a new approach. When I arrived this morning, I was told that some drastic changes had been made and could I finish it off? It certainly was a dramatic change. 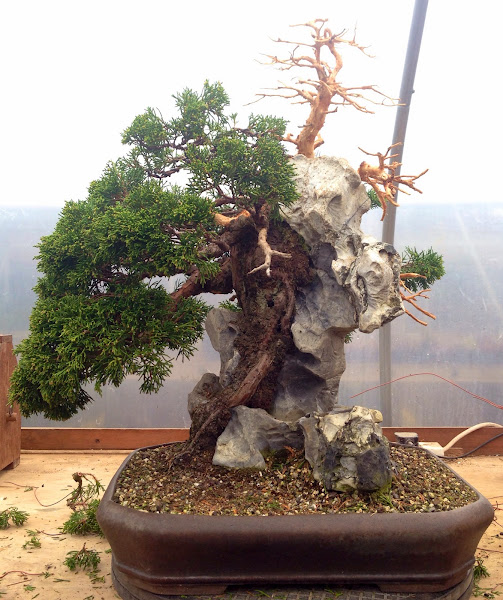 Bish, bash, bosh... it now has more jins than I did before the auction at the last BSA show.

The balance between the rock is now much better and it feels as though the tree and it have more than just a man made relationship which is how the first couple of pictures felt. After looking at the tree and rock from 360 degrees, considering the branches and their live veins as well as the newly created jins, a new front was decided upon and a few more branches would be destined for the scrap heap. 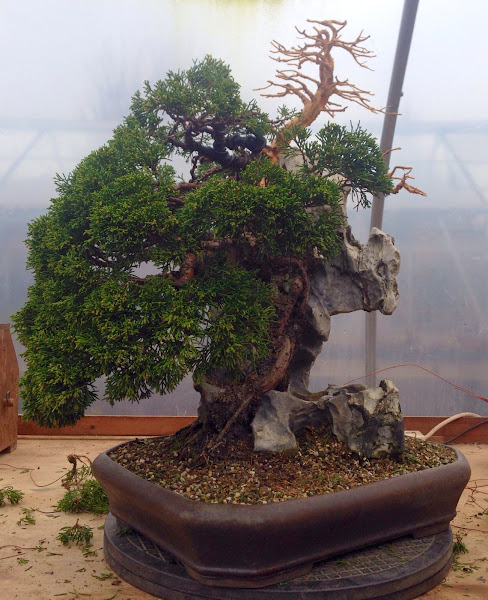 This front makes the tree even more compact and the rock even more dramatic. Note the increased interest, movement and negative space in the lower right err...quadrant. If only we could see the trunk and the rock a bit more...so a bit more bish, bash, bosh and two and a half hours later... 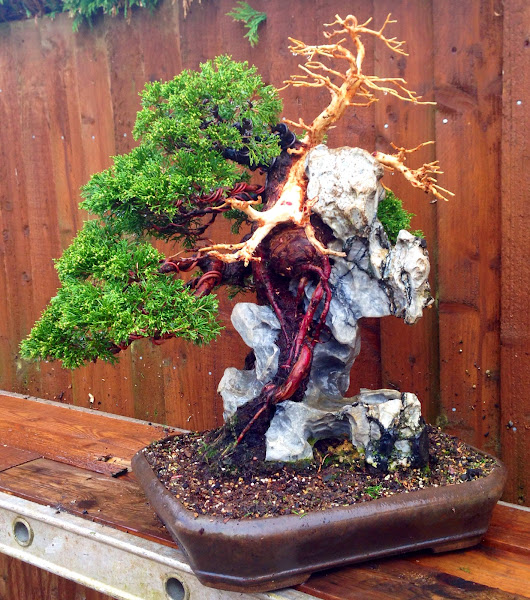 Not quite finished, there are some pads that need to fill out and the back of the apex is a bit sketchy, but the main branching structure is set. As per usual we didnt want to spaghettify the branches too much to create an instant image and so there is some growing to be done. I am particular pleased with the tiny little foliage pad that has made it round the back on the right hand side. The presence of this creates much more of a three dimensional image which of course you can see throught the screen, as well as bringing more attention towards the rock. Always remember that the eye tends towards the green..the green...the brilliant green.

Moving back to the tree...Neither of us are overly happy with the central dead wood section and the heavy lump of live vein underneath it. The time period while the freshly created shari dries out will give some time to reflect on what will be the next step on the project. A few suggestions have been made and we shall see where the next evolutionary step takes us.

Working with clients to create the tree they want is a fundamental concept of what I try to achieve. Sometimes I wonder if it would be better to just do what I want to do and get to a result that I want sooner or just see where the tree evolves. One thing I learnt from experience in Japan is that if the enthusiast doesnt enjoy or understand the process, then you can end up with some unhappy people. Some clients very begrudgingly accepted the Chief's rash and bold moves, even though they were the correct thing to do and ultimately would have made a much better tree. As obliging apprentices who couldn't argue, we had to listen to them bitch about it and try to promote the Chief's ideas and techniques as correct (which they were) whilst simultaneuously trying to see their point of view. Perhaps this has made me much less of a daring risk taker? Sometimes a slow evolution is a good thing, other times it can be very disturbing. (Skip to 3.20 for evidence)

Apologies for the random J pop tangents. It just gets stuck in your head...