Following on from the last post talking about the importance of the client - professional relationship, one of the comments from Marcus made me realise that words, in the wrong hands are useless tools.  Perhaps I should have kept the extra pages I wrote as it explained my sentiments slightly better.  Some clarity is required here...

For those who have never had the chance of speaking with me in person may think of me as being very pro Japanese Bonsai, I studied there, I return there, I am a fan of certain Japanese aesthetics, some Eastern philosophical and cultural ideas...so this is a conclusion that may be easy to come to.  The truth is a much more convoluted situation and not quite so black and white.

One of the benefits of spending a full apprenticeship at a top garden where nothing is hidden, is that nothing is hidden.  Good, bad and ugly.  I have seen all sides of Japanese Bonsai, the way in which shows, judging and business operate and how the National Association has gone from a group that at it's peak had a membership of around 80,000 and was aiming for 100,000, to a membership of less than 10,000.  I have seen the quality of exhibitions drop and the attitudes towards business amongst the rank and file as well as the elite. In no way do I see this as a good model for western bonsai and am doing all I can to not replicate all that I have seen. There are good aspects to the Japanese model which is based on a professional - client basis and there are some bad aspects.  To deny that would be ridiculous, as it would be to focus on the bad aspects.  This is counter productive and it destroys peoples dreams and confidence in bonsai and Japan, but to live in denial is equally as counter productive. Finding the middle ground is difficult and as I mentioned in the last post, double edged swords a-plenty.  All we can do is individually strive for what we think is correct.

Translating the good aspects and ignoring the bad is one of the hardest parts of the transition between Japanese trained apprentice and Western professional, something which people like Ryan, Mike Hagedorn and myself are facing.  One of the things that helped me through the dark times was Ryan's unwavering belief that he had the ability and opportunity to create a Bonsai community that was pure, based on merit, ability and effort, along with co-operation rather than competition between professionals for profit and personal gain...exactly the same sentiments with which the Japanese Bonsai community started to grow in the post war period. As things stand, those two are doing a very good job of it...my progress is questionable.

In order to make a square peg fit into a round hole, the best thing to do is to try and make the hole a little squarer and the peg a little rounder, that way we get something which has the best qualities of both worlds.  This is why I felt a little dismayed by some of the negativity shown towards what in my mind was superb evidence of the progress which has been made towards excellence and what I considered to be a morally correct decision on the part of all parties involved.

Well...enough of the ramblings of a useless tool, here is a very useful tool which I finally managed to pick up yesterday.

A member of the Maidstone Club, Adrian Long, has designed a Shohin work stand which enables the user to change angle and orientation easily. The table top is sturdy and has a non slip surface and is big enough for your average shohin.  Adrian assures me that it is secure up to 6kg, but if you have a shohin that weighs more than 6 kg, then please change your soil mix to something less dense. 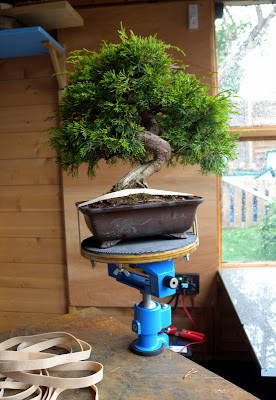 I used mine in conjunction with a large sized turntable which enabled me to spin it round as the top is fixed.  Adrian is working on a large floor standing turntable that will rise and fall.  I look forward to that as that is one aspect of Japanese Bonsai that I think should be adopted by many.  For the eagle eyed amongst you, yes that is Lady Saruyama's Juniper styled at the 2010 BSA show and displayed earlier this year as a work in progress.  The unusual tokoname pot, with carved design was a late Christmas present. 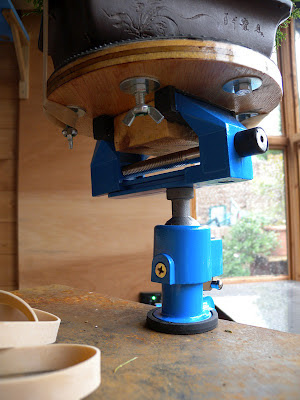 Bolts and wing nuts as fixing points for the strong and unbreakable rubber bands.  Bungees are also available. The rubber bands are very tight and just one is necessary to hold the tree in place. 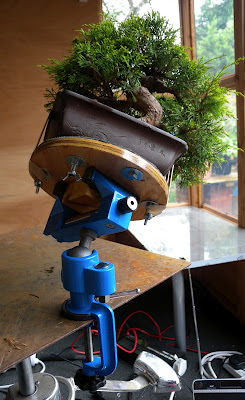 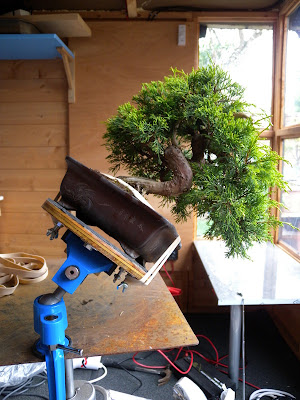 Maximum angle.  The ball joint is tightened by the little handle at the front and is very tight, does not move at all.  Now that I look at it like that...maybe a windswept...no no no...hands off. 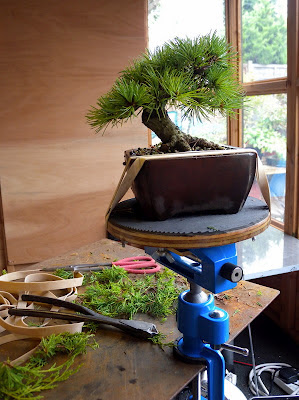 Useful with pines as well...this is the little shohin pine from earlier in the year.  Still only one piece of wire on it.  Need to get a smaller pot though....

I found it to be a great little table, much better than the one I had previously which had a similar design but the ball joint and the clamp was too slack so I never used it.  This one has a very secure and stable feel to it, and especially combined with the turntable it makes for easy work and easy work makes for good work.

Adrian is making them himself but has asked me to promote them which I am happy to do.  They are available for the tidy sum of £68 plus p+p.  Email me for more details and I will put you in contact with him.  they will be for sale at the Shohin UK show next year no doubt, but for any shohin enthusiast, I would recommend it.  I look forward to the big turntable.

Between a rock and a hard place

Somebody told me that blogging is only effective if done on a regular basis. I must have missed that lecture. The complaints department has been steadly filling with comments and so I have been compelled to pen a missive to the faithful. Meaningless I know but apologies...Im currently on a Ryanair flight back to the motherland, the flight is as usual full to bursting (except for two empty rows in front of me which are necessary for balance aparently). I have had to squeeze in between a kicking and screaming child and a lady who is flying for two to put it politely. The life of a bonsai professional is oh so glamorous...

Still, it hasn't all been budget airlines and infant induced stress since the last post...the garden is finished to a certain extent, polytunnel up, watering system in place and related problems a plenty. I think most of you are aware that I was the judge/demonstrator at the midwest show earlier this month. It was held in the Botanical gardens in Chicago, a beautiful location, but unfortunately it meant a flight through the immigration nighmare of O'Hare which is fast becoming my least favourite airport. The show itself was a good experience, having heard a little of the issues around the previous years show, including the hate emails and venomous comments towards the judge (That bloke Bryan summat or other), I must say that I was a little nervous. In retrospect, there was nothing to be worried about, the organisers, especially the indefatigable Cat Nelson were outstanding and although I was pretty busy (12 people in a three hour workshop), it was good fun alround.

There is a video taken of the critique I gave, shot in flattering black and white by OfBonsai, thank you for that, old school style. I haven't watched it, nor looked at the comments, but my inbox is yet to be filled with bile that Ryan received last year so I guess I didn't try hard enough to be offensive. Admittedly I have been off the grid for 4 days so it maybe. The demo tree was a massive spruce, grown in the gardens since '64 and destroyed in less than 4 hours. It was a messy tree at the end, but all things being equal, it will survive because of that, despite cutting off around 90% of the foliage.

There was, as always, some controversy at the show, with some people claimng moral high ground or jealously sniping away at the fact that a professionally styled tree was entered into the show in the professional category, with an amateur owner. A forum thread has been running on this which makes for some interesting and disturbing reading. I often wonder if and how bonsai will progress and where my place will be within the brave new world. I think one of the biggest problems, but also a deeply interesting aspect of Bonsai is the cross cultural issues that arise with the practice of what is essentially an eastern pursuit, within the cultural and societal framework of the west. Double edged swords aplenty...the need for professionals is essential in order to facilitate the movement of trees, pots and knowledge, something which is considered normal within the Japanese and Chinese Bonsai world; yet for some people, it is seen as cheating to use the services of a professional or in some way wrong for people to profit from their hobby. Do small trees attract small thinking? Sadly It often seems that way.

The professional - enthusiast relationship is not one often discussed openly for various reasons, but it is an absolutley essential relationship without which, Kimura, Kobayashi and Suzuki (or Neil, Noelanders and Valavanis) simply wouldn't exist in the way that we know them now, and there would be far fewer masterpiece trees. This relationship is an essential one, as long as it is mutually beneficial and is beginnng to be understood and accepted in Europe and the US but still there are some who think of it as cheating or are against the idea of an enthusiast displaying a professionally styled tree at an exhibition under the name of the enthusiast owner. This should not be seen as a haves or have not argument or a snake oil salesman pitch in order to drum up business, rather a call to stop and think a little about what we are hoping to achieve with Bonsai, to improve the art form as a whole, or to accumulate personal glory? Although pessimists will say the latter is the reason for buying a professionally styled tree, it is in fact the former which can be achieved a lot quicker with a symbiotic relationship between the enthusiast and the professional artist.

Anyway time for bed. Just had to get that off my chest. I had in fact written a page more but deleted it because it could have been interpreted as too much like a sales pitch. Will have some pictures this week for those who are still looking. My senpai Akiyama is cming for a few days next week, so i will be busy working on getting stuff to a presentable condition.

Autumn is coming...make sure to fertilise accordingly...lay off the nitrogen so no new growth is induced that won't have time to harden off, let the tree expend any nitrogen it has in the system and look towards high P K fertilisers, especially bonemeal for an autumn to winter fertiliser regime. Get the roots, foliage and cell walls hardening ready for winter.

Posted with Blogsy
Posted by Peter Warren at 00:06 4 comments: