They seek him here...

It has been a busy few weeks since the lazy summer, just getting back into things. I have picked up a few new converts to the cause and seen some positive signs for the future. Maybe there is light at the end of the polytunnel after all.
I had some workshops in Cheshire and up in the wabi wastelands of Northumbria recently, held up at Willowbog. I don't take pictures myself as I have a tendency to lose or break expensive electronics, so I will point in the direction of a site where you can see them....Bonsai Eejit. It is a good blog as well, so I suggest following it. I wish he had photoshopped this picture though... 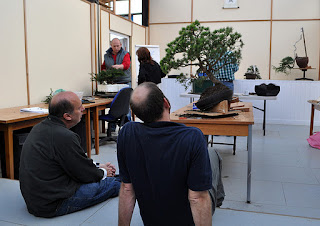 Baldness as well all know is a sign of great virility.
Anyway, the workshops all went well and I think most people went away knowing more about Bonsai than they did when they started, which is the main thing. I have a slightly different approach to workshops than many others, sometimes it works, other times it doesn't.
Friday and Saturday were spent at the EBA event near dusseldorf in Germany. There were some Japanese over promoting Omiya and the possible world convention in 2017 there. I was asked to help out, but I ended up just sat chatting with John Pitt and Dave Prescott for the most part. There were some good trees and some not so good trees. One which took my breath away was a potentilla grown from nursery stock over 35 years. Absolutely awesome. I didn't take a picture but believe me it was great.
The trip was good for networking, I met some new people, including the chief of the French Association who was a great bloke. From the sounds of things, French Bonsai is on a very sustainable upward curve...I am going to try and get over some time. I also had chance to discuss the plan to take over the trees of around 8-9 people from the UK to Noelanders and display them in a similar way to the professionals do at Kokufu. The organisers of the show were enthusiastic and open to the idea. It is the future....i've tasted it.
If anybody in the UK wants to display at Noelanders but doesn't want the stress and hassle of taking it over, or needs help prepping the trees, then get in touch. Minimal fee is being charged as we need to get the UK back on track and pushing forwards.
I have also been fixing pots, a couple of pics here...but I'm only half way through because I broke the cheap diamond burrs I got off ebay and almost set fire to my kitchen with a propane burner that was a little on the powerful side. I will get it finished in snowy december and post it up. 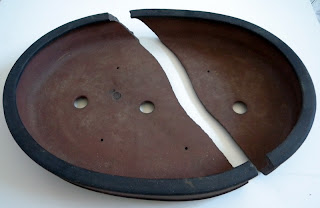 Off to Paris tomorrow. I have to take the camera...otherwise there is no point me going.
Posted by Peter Warren at 15:08