Cambodia, it's tough kid but it's life...thankfully this song, which got me through many a night during the apprenticeship days (don't send me back t' dark place) was not reflective of the recent jaunt that me and Lady Saruyama took to Italy.  A weekend away from the trees was booked in and I spent a while checking for the cheapest flights around...Ryanair all the way to Pisa.  We also went on the train to Florence, which I didn't realise but is a massive tourist hotspot...loads of pretty old buildings and that...ignorance is bliss as they say.

Highlights of the trip included lots of waiting...including two hours to get tickets to watch the second half of a pretty appalling game between Fiorentina and Inter...it finished 0-0 but I did get to see one of my favourite players do nothing... 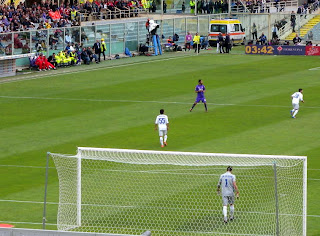 He's a Japanese lad, goes by the name of Nagatomo, pretty legendary little left back for those that are interested.. 18 Euros for 45 minutes of pretty much non action...personally I was hoping for a bit of Ultra Violence...in a city renowned for historical buildings and culture.  I know how to live...and so it seems does a certain English Pot Maker.  Not doing any research or using guide books always means that surprises are around the corner, so you can imagine my astonishment when I found out what John has been spending his earnings on from making bonsai pots... 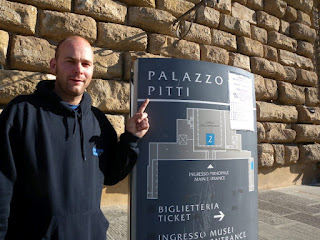 For those not conversant in European, "Palazzo Pitti" means "Pitt's Palace".  A regal building it was too, it's amazing what a bit of hard graft making pots will buy you these days.  Nice garden as well, and it was free that week to enter so enter we did, which is a good job because other wise I would have missed out  on this masterpiece in the garden.  A piece of art (possibly by the man Pitti himself?) which I saw as a scathing commentary on the bare faced cheek of some yamadori collectors who will collect anything for commercial gain. I have no problem with ethical and morally sound collecting practices but I have seen some crazy short termism in the bonsai community which will eat away like a cancer and destroy itself unless self governance and an ethical code is adopted by everyone, but lets face it, I have more chance of making enemies than friends with crazy ideas like that.  Every man for himself and I'm all right Jack. 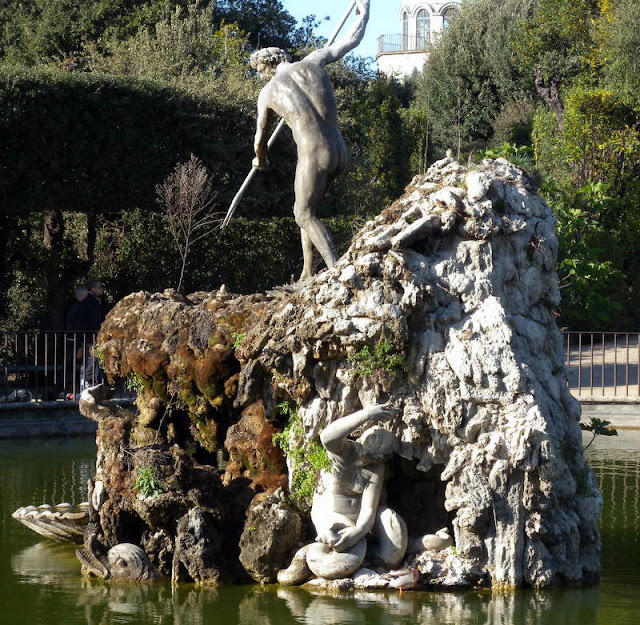 Can't go anywhere without work following eh? Where do ya draw the line?