Following on from the previous post, here is a before and after. 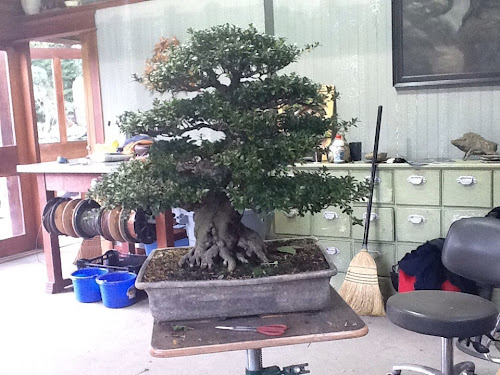 The tree is a kaho or gyoten of considerable age, estimated at 80 years which makes it a granddaddy...but it was in very healthy condition. It had been repotted earlier this year, pruned then and again at the end of june. Both times had been half for balancing the vigour and half for creating the style. The work now was to take that balanced vigour and use it to redevelop some serious problems.

The apex had two major branch structures in so one was removed and the remaining apex spread out as much as possible. There is still a gap on the top left but it will fill out. The pointing branch on the left was accentuated and other branches lowered and spread out. The second right branch was bent severely (for an azalea) and so i used raffia and 6mm alumi wire. When wiring satsuki, go big or go home on wire thickness....the thicker the better and wire it loosely. As previously mentioned a much more clip and grow style approach is being taken but that involves some wiring. 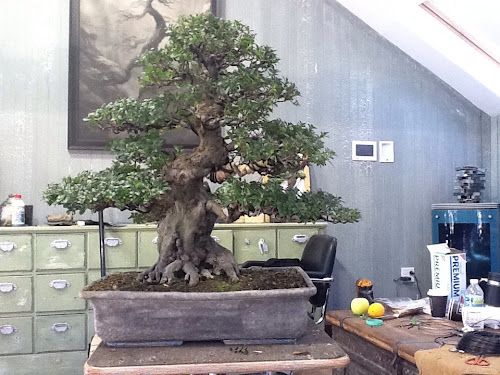 Once again poor camera shots but it is an attempt to do before and afters, even if it is just daily work. I realise this is what people want to see and there are a good number of professionals out there who do it and get a lot of love for it. I have been thinking about this for some time because i consider the work done here to be nothing special, like a lot of other published stuff. Still there is value in it so enjoy...

I guess this kind of pine styled azalea grown in a typical way into a triangle outline is the kind that was being criticised on the forum posts, and there is admittedly a standard shaping to many azaleas but therewithin lies a different aesthetic and appreciation of details rather than purely form alone. While the shape may be regular the quality and distribution of the flowers, the construction of the branching structure, the lack of scars and the overall health of the tree offer the possibility for appreciating technical and horticultural prowess as much as artistic ability.

A lack of obvious artistic input does not immediately mean the work is worthless as a bonsai. If judged on different criteria then it has value. The devil is in the details.

Anyways after a knee shattering flight i am in Birmingham for the weekend. Will be workng on a tree i demo'ed on earlier this year so maybe get some pics of that as well.