Well it seems as though the comments I made in an earlier post have piqued the interest of many people. I have had quite a few comments of support and it seems it was the topic of discussion at a couple of shows in the uk last weekend. Thanks for that....well I have nothing further to say on the matter and don't wish for this to be a witch hunt or for the gentle art of bonsai to become political. The final comment I will leave to Edmund Burke, "A very great part of the mischiefs that vex the world arises from words."...and if they had Youtube back then I'm sure he would have mentioned it as well...so on that bombshell.

Back to bonsai...last few days have been back to the pitface, working on trees. I am working alongside an artist who I respect greatly and is one of the greatest non-japanese trained bonsai professionals in America, Suthin Sukosolvisit. He will be demonstrating at Noelanders next year so it will be interesting to see him in action there. More on him later.

Over the last weekend I was asked the question "does the strength in azaleas come from the roots or the foliage?". It was part of a point that Ryan was making about the driving factor in certain trees. For some trees it is the foliage, for others it is the roots. Up on stage I was stuck for an answer because there is no easy answer. When dealing with the initial styling of azaleas, working from raw stock you can take it back to close to a rootless stump with no foliage on it. So we have a situation with neither, yet it begins to push growth in both directions. If that were a pine, juniper or majority of deciduous trees then we would have a dead tree. That said, this can only be done immediately after the tree has been collected from the field and has an incredible amount of energy stored within the tree. Once that has been used to create roots and foliage in year one we get into a dynamic system where the presence of foliage drives root production and the presence of roots allows foliage production. If the system gets out balance then we start to hit problems and if we hit problems the careful management of both foliage and roots is essential.

Azaleas need transplanting and root pruning on a fairly regular basis. Due to the fine hairlike nature of the roots, the softness of Kanuma soil and the use of solid organic fertilisers mean that the top layer of roots begin to mat together and form an impermeable layer. Regular repotting will prevent this from happening, however whenever repotting, always ensure that there is a careful balance of foliage on top. The tree needs some foliage to generate energy so that it can put on roots, but not so much that it cannot be supported by the few roots that remain. If there is a lack of roots, the foliage dessicates, weakens and then the whole system begins to stall, usually resulting in serious branch loss. Equally if there is a lack of energy within the tree due to a year of slow growth because of root issues, and a lack of energy generating capability (foliage) then the tree stalls usually resulting in serious branch loss.

All sounds quite complicated.

An example of a system that went out of balance is this tree here. A tall exposed root tree the variety of which is uncertain as it has never been allowed to flower since I started working on it (waste of energy). It was very unhealthy just over a year ago, so much so that it was destined for the burn pile. It had no roots to speak of and as a result the foliage had all but died. Sadly I have no picture then, but this is it today. 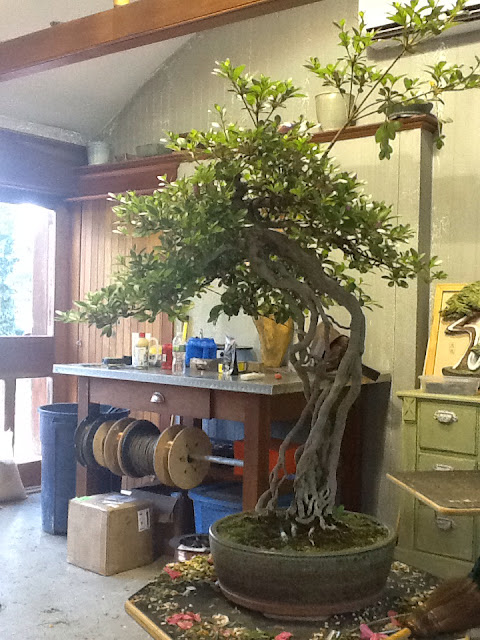 It was transplanted into a deeper larger pot and fixed securely which was one of the reasons why it had suffered. Tall trees like this often suffer from such problems, so always always ensure that your trees are totally firm and stable in their pots. At the inital transplanting every single viable green leaf was left on. The reason for this was that there was a need to reboot the system and we needed to have a source of energy reproduction.  A weak tree needs to regenerate energy and the only way it can do that is to have as much photosynthetic surface area as possible.  The year of the transplant (2011) the foliage of the tree grew very little until the latter part of the year after it had used the energy created by the foliage to put on a small amount of root, enough to support the foliage mass it had initially.  Once it had reached an equilibrium point it began to push in both directions as new roots allowed new foliage to grow.  The growth spurt then began.  We saw a couple of young shoots sprout out, the sacrificial branches you can see poking out of the top.  These were left to drive the system forwards, providing both the stimulus and the source of root growth.  Without those two branches racing off the tree would still be stuck in a rut of not being able to recoup the energy it is expending in pushing new growth.  Leaving as much foliage on the tree in situations such as this is absolutely essential.

The removal of foliage reduces the trees ability to generate energy and so we cannot push it past the tipping point which will allow it to bounce back.  Once this tree regained a little vigour, foliage was put on all over and we have many new shoots, many of which are not necessary for the final design but the engine is up and running, we must now carefully begin to push the tree in the direction that we want it to go from an aesthetic standpoint.  The pruning that was done on it was to begin to reduce some of the totally unnecessary branches, so nodes where we have three or four shoots reduced down to two, new shoots that were too close to each other were removed.  As much foliage was left on the necessary sections so that they are favoured, they can push and pull energy along the branches that are required.  With Azaleas they can be totally defoliated or branches pruned back to leafless stumps, however the potential energy within the tree and the roots is still too low to guarantee new shoot formation if this happens. 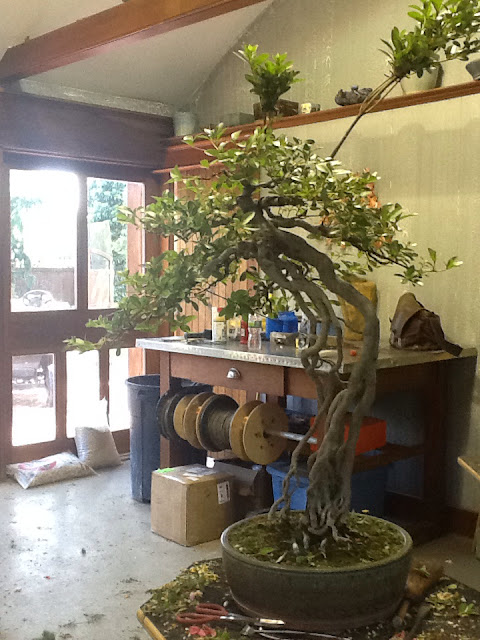 Apologies for the poor ipad pictures and the background but you get the idea.  In the ideal situation, I could prune way back to shape but as the roots are still not up to supporting such a drastic action, we still need the foliage mass to drive the tree forwards.  If defoliation occurs then we run the risk of reaching that tipping point from which we cannot return.

Anyways, got to run, Suthin is waiting for me to go to work.  All sounds very scientific and complicated so I hope it makes sense.  I have been thinking a lot recently about Entropy and energy systems, some fundamental concepts of physics which have stayed with me since the first dark times...always interesting to revisit those ideas with a fresh perspective.