Well it seems as if the last post got a lot of people commenting. Thanks for that, it is always nice to receive compliments but I will just say that I don't take them well. Never have done...I think I may have a masochistic streak in me.  I would also like to point out that if I am not careful, then I am at risk of becoming the king of monkey mountain. God forbid I start listening to the praise and then start strutting around like cock of the walk at shows. Quick, someone make fun of me for being overly pretentious or messing around with cheap trees....anyway thank you for the continued reading and for reaffirming me that maybe I should continue to drivel on...so back to the post...


Twisted and exposed root Black Pines such as this are not overly common in Europe, so it was a pleasure to do a little work on this one, especially as it appeared to be a black pine grafted onto white pine root stock,something I have never seen before. I may be mistaken but there is a definite change of bark texture half way along the contorted trunk of this tree belong to a client. I had seen it a few years back and liked the unusual nature and so this time I got permission to work on it as it was getting a little out of control. Not massively, but on the verge of becoming a serious problem with some weak areas which would be beyond saving if not looked at soon.
As usual when working on a tree that isn't mine, I began with asking what the owner saw in it, then made some suggestions based on what I saw, what they saw and any other valid options there may have been. 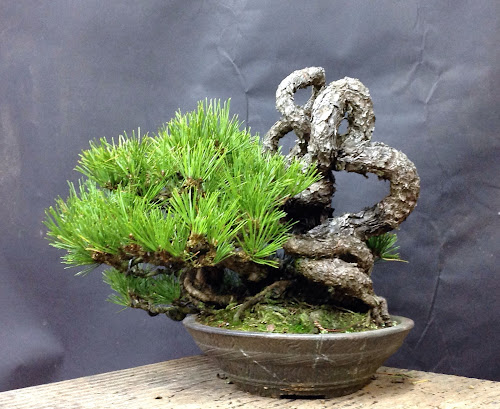 This side gives us a compact, more Japanese looking tree...
With such a unique shape, finding the right possibility proves more difficult than with a more regular piece of material. Considerations than must be taken are not only the lines of the roots, trunk and branches, but also the health of the branches with a view to how likely they are to grow and be healthy. There is no point basing a design around a branch that has little likelihood of surviving. When developing a tree, balanced growth is by far the easiest to manage and so achieving that should be one of our first goals. If one branch on the tree is weaker or more vigorous than the other ten branches, then by the time the unbalanced branch is "finished", the other ten branches will be too coarse or still too young respectively. How is this achieved? Balance vigour in roots, foliage and bud density. Be a socialist and assist the weak by taxing the strong.

With this tree, the lowest branch was weaker because of a lack of sun and aggressive needle reduction and candle cutting in previous years. 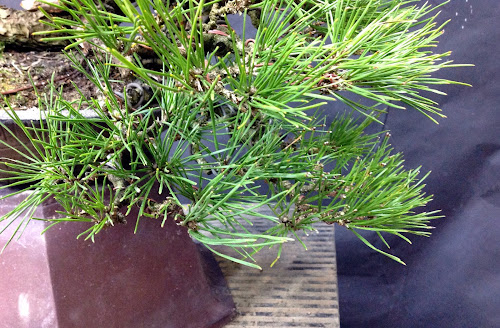 Here it is after having been rough wired and pruned. Given the ability of the owner and the environment, and should the correct course of action be taken, namely do nothing for a year to that branch but allow it to grow, then chances of survival are high. In which case, using such a branch for design purposes is valid.
The discussion process revolved around what the objective was, and how quickly it would be ready to show. Such a tree is ideal for the kifu size category and would be a certain head turner at the Noelanders trophy. With size considerations not much of a problem, as it fit easily in 35cm, it would be a case of do we make it small, compact and dare I say, Japanese-y, or do we go for a little bit more dynamic, stretched out and less compact. I refrain from saying European or Western, because the opposite of the Japanese compactness is not by default Western, as there are plenty of ridiculously compacted trees in this part of the world. For true dynamic trees, look to China and some of the funky stuff they are creating now. Anyway, I digress. 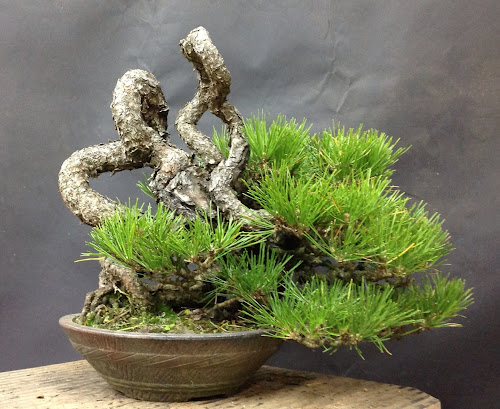 This side would give a more dynamic, tree, especially if tipped up like so. 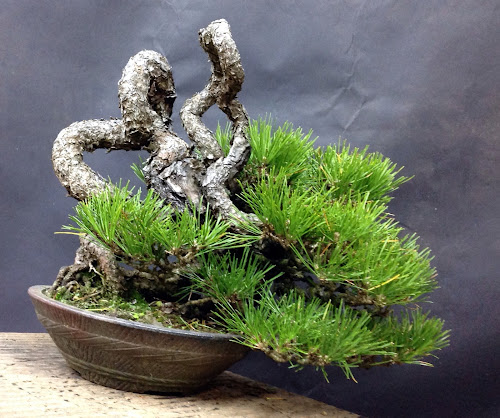 The decision was made to create a more dynamic tree, using the weaker branch. In the back of my mind I decided to have an insurance plan for the possibility it went tits up on the weak branch and so, kept the back side, the Japanese-y side, a possibility with a little tweaking.
The problem of the competing sides and apexes (apices?) was solved with some pruning, and the branches rearranged and tweaked with minimal wiring. All of the branches were weakened due to candle cutting and lack of bud selection, so there were three of four small buds at one node across most of the tree and so I refrained from over wiring the tree. Given time schedule for it, there was no need. A year or two to set main structure, first year selective candle cutting on strong areas only, second year complete candle cutting and then refinement wiring 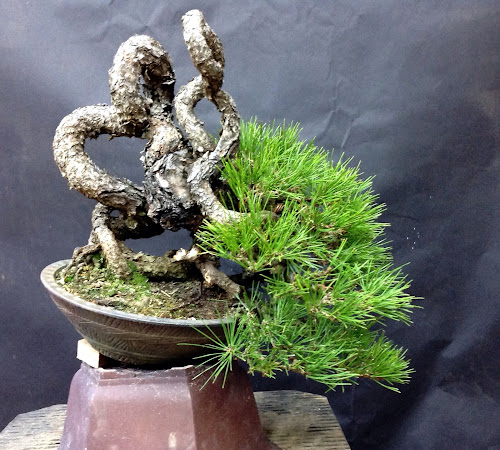 First styling. It looks even more dynamic from 5, 10 degrees further round to the left but I'm not a very good cameraman...only one major branch was removed around the base, this opens up some space to see the roots and also the main branch which is currently lying on the soil surface. 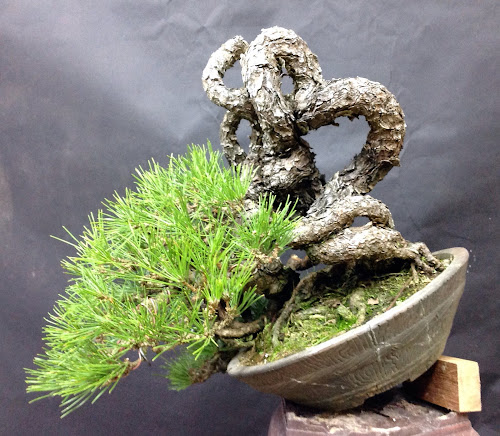 The back side, which given a tweak and the removal of the weak branch, plus a load others at the back, would make a super compact tree. I prefer the first front to this one, this would just be a blob of green on a twisty trunk, whereas the first and true front has some space and undulations in the foliage.
So in short...erm, think long term.

Posted with Blogsy
Posted by Peter Warren at 11:20