The benefit of laziness

Or at least the advantage to doing nothing. Whilst on my recent sojourn in America, I had the pleasure of spending some time in the company of Marco Invernizzi. It was an interesting time as we shared battle stories of times past and more recent, recanting tales of apprentice abuse and the trials of being a wandering bonsai artist. We even managed to find some very common ground musically which was interesting to say the least. Finding the middle ground is an important aspect of life, and bonsai especially. 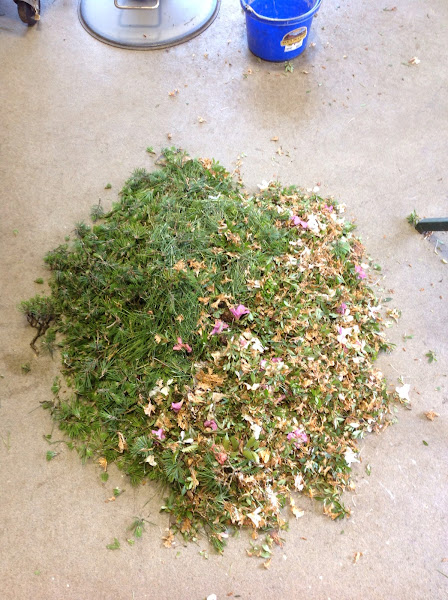 The middle ground between Marco and myself after a days work

During the course of the conversations we came up with many things, but one was the point that in general most people in Bonsai fall into two categories; those who work their trees too much, and those who don't work on them enough. Which are you? A constant fiddler with a bench full of highly stylised and under performing trees or a let it be type who has a row of (possibly)healthy, dirty bushy trees?

It wasn't until I first came back from Japan did I truly realise that sometimes the best thing to do is nothing (well relatively). My younger brother taught me this lesson with his outstanding care of the rosemary I had in my greenhouse at home. Having heard stories of how difficult they are to keep, he seemed to have no problems doing it and when I asked him what he did, he just shrugged and said "dunno, nuffin special really". I put it all down to me personally. It was clearly all my doing as my absence was the key to success.

Obviously this is a wide generalisation and the tree needs to be set up properly, this isn't an instruction to just do absolutely nothing, but once they are repotted properly in good soil and have the branches pruned properly then for some trees, they just need to be ignored for a while, watered and fed as required (a lot of attention needed here), but not necessarily messed around with, not picked up and moved, not brushed or combed, turned around and tipped up, moved across the garden, pruned or plucked because we are bored....just left alone to do what trees do naturally, grow.

A recent trip to an occasional clients house reminded me of this. Some of the trees I work on belong to those who don't really do it as a hobby but like having them in the garden, but they need tidying up once a year to keep them looking somewhat like when they purchased them. Invariably many of these untended trees can be some of the healthiest, including this Black Pine which was just ridiculousy vigorous for the UK spring/summer/autumn we have been having. 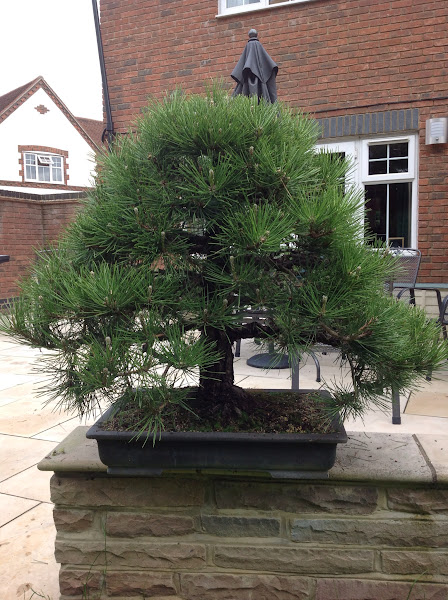 This was after the spruce up job, so many of the super long candles have been removed, but the needle length, colour, turgidity and density was incredible compared to some of the over worked and over plucked trees I have seen. The back buds were incredible, evidence enough that high needle density and no candle cutting = back budding. 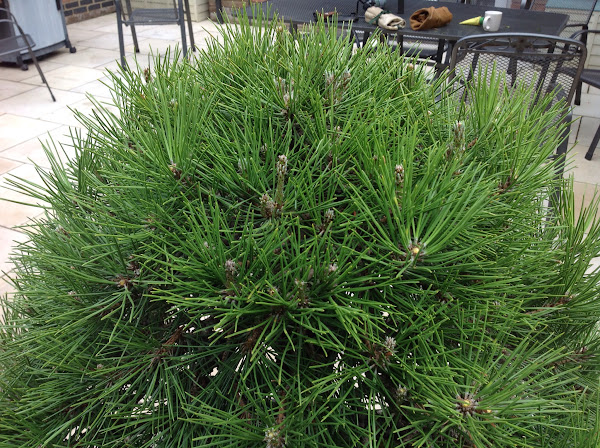 Now sadly this is at the extreme of doing too little and whereas the health of the tree is great, the healthy growth is being misdirected and visually it is a little lacking in structure. Many of you are sat there visualising plucking the needles, wiring the branches and bending them all into nice neat pads I'm sure. I know I was thinking that I could enjoy turning the bush into a pretty pimp little formal upright.

The key is to find the middle ground where both your desires to see a pretty tree are fulfilled as are the trees requirements for being left alone to just get on with it. I swing from constant fiddler, picking needles here, cutting branches there to leaving them unattended for weeks on end. I think that makes me the worst example out there...why are you reading this again? Oh for the occasional tree I put up and a wonderful choice in youtube videos, thats why...

Onwards and upwards people to a world of pure imagination

I know it has nothing to do with the trees but it's a good tune...