There are some aspects of my training and the techniques I learnt under the Chief that because they are inappropriate in the west, I have thrown away with great ease. There are some however, which no matter how hard I try, cannot be over ridden despite their apparent lack of importance in the western bonsai community.

Working on satsuki as i have been recently, one of these points came to be the bane of my week...namely the purity of flowers on kinsai. There are thousands of different varieties of azalea and over 800 recognised by the authorities, one of the most popular is Kinsai...the red firecracker type flower which also has a lovely narrow leaf and a growth habit that lends itself to a superb deciduous image ( see many trees made by Tsukada, one of which made it to Europe via Gingko and then into Italy ). Sadly the problem that Kinsai have, other than their slightly unique growth habit which can be difficult to maintain, is that they, like many of us, have overpowering parents...particularly the mother.

Whilst the offspring is a lovely, exciting multi petaled flower, a red firework; the mother is a large boring fat red thing known as Lapa, same shape as an osakazuki and frankly a little undesirable. Due to the genetics of the trees, there is always a dominant flower gene and left unchecked, this will come to the fore. Don't ask me how and why because all I know is that it happens. Multi coloured trees left unchecked will eventually turn red, Kinsai left untouched will turn to Lapa and it is an irreversible process. The leaf shape and colour will not be affected so appreciation throughout the year is the same but when it comes time to flower... 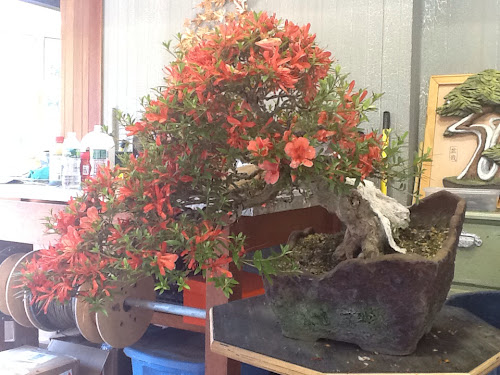 Another pet project, a half dead azalea saved and now seen for the first time in flower... You can see the different flower types...must...remove...those.... 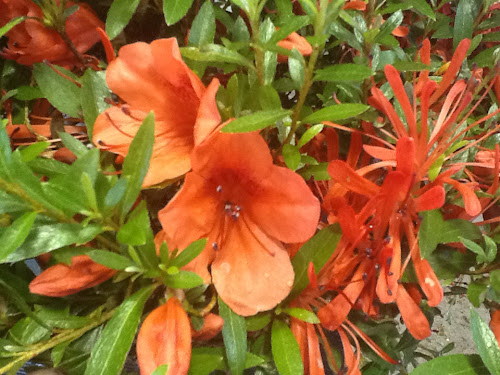 Now for the majority of sane people in the bonsai community lets say 99.9%, the difference is not that important, but as much as I try, I cannot sleep at night knowing that such contamintion is occuring. It was always drilled into me and at times I revert back to type, like a sleeper agent suddenly activated to carry out a mission after 20 years of deep cover. I just cannot let it lie. Some of the trees owned by the customer were too far gone to be saved but there were some where it was possible to save them. 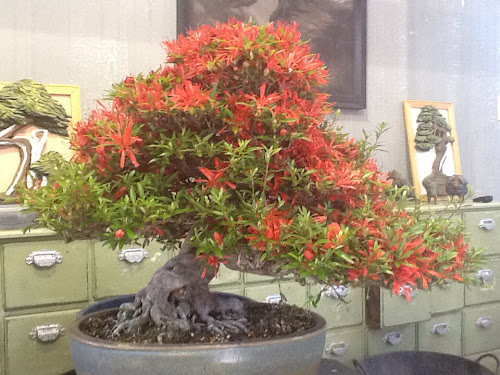 This tree for example was still fairly pure, at first glance, you can only see a few Lapa flowers in there but they must be eradicated, if not the influence will spread and more flowers around it will begin to turn and you will notice that where the flowers once had 11 or 13 petals, thye have five thick but separate ones, then next year they ar fully converted. The only solution is to remove the entire branch back to where we have desirable flowers. 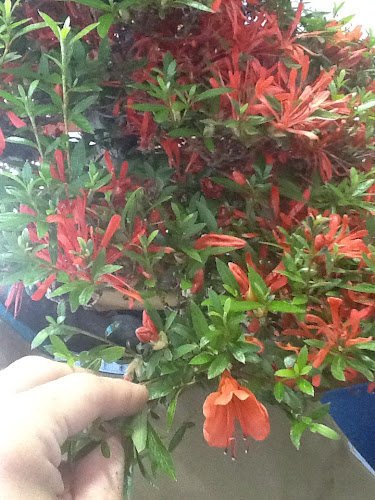 You can see that the branch has a big flower at the end of it and also had some bulging flower buds. It is impossible to tell what type of flower will pop out of a bud, so I checked by physically unwrapping the bud and checking petals. This was done because I was operating on a tight schedule rather than best practice. The whole branch was turning to the dark side and so the only and final solution was applied. Removal. 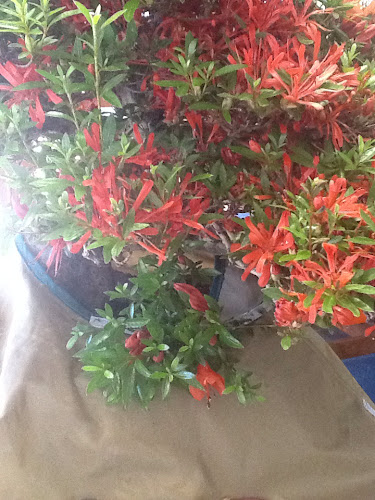 Genetic purity re-esablished, the other single branches with bad flowers throughout the tree were removed. On this tree, the flowers were left for further appreciation, they had a good week or two left in them, but it was important (to me) to get those bad ones removed whilst I could still see them. The client was very understandably not bothered at all, he is after all a sane man, and his appreciation is 365 days a year. Thankfully we found a middle ground where I could appease my OCD on trees that it was worthwhile being saved and I had to let it pass on those that were nicely styled but confused in the flower department.

I no sure how many people will appreciate things such as this but it was something that was drilled into me and was important for a certain group of people judging things by a different set of criteria. Whereas I have come to be flexible on certain aspects and criteria, there are things I cannot let go, despite knowing their relative lack of importance. I am not claiming that they should become important but people should be made aware of them and come to decisions themselves. After all, majority rules...sadly in some situations.

As I regularly say, anybody who does Bonsai has control issues and should seek therapy. I have just had a breakdown moment and now i feel guilty and ashamed, but the pleasure was intense...I had been holding back on styling the kinsai as I didnt want to use branches to style the tree without knowing what they were...now all the kinsai are tagged with percentages of purity, bad branches removed and the trees lost to the darkside are forgotten and appreciated simply for their appearance. I felt a flush of relief as I cut those last branches off before dashing to the airport. Like picking away at a scab that will never heal.