After the train ride which almost turned into a disaster as I was engrossed in a very moving book, "A life too short", and almost missed the fact that I had to change trains; I arrived on time at my final destination where I spent the weekend with the owner of some outstanding trees who had asked me to give him a hand with one tree in particular. I don't usually like to show off too much, but earlier this year a good friend told me (in this edited version) to "stop messing around with little trees and show off a little", so after the recent bargain basement trees, here is a slightly more impressive one just to show that I do work like this and try and dispel the rumour that certain people still like to try and promote...although nothing will stop the insecure from trying.

I think that it is fair to say that one of the big differences between Japan and the west is the ability to refine trees to a high level. The creativity that exists in the west is outstanding, and if most of us are honest with ourselves, there is much more enjoyment in creating from raw material rather than the slow progression of subtle improvement such as the five years it takes of careful defoliation and detailed branch selection to create ramification on a deciduous tree for example. We want the immediate rush of creation, not the tedious work of refinement. This is why there is a relative lack of truly refined trees in the west, we are too quick to redesign, prune back too hard, remove a trunk simply for the sake of doing something.
Refinement of trees takes a certain amount of suppression of ego and that desire to redesign. This is something I talked about in an article way back when in Bonsai Focus where I styled a literati taxus. There was a deliberate and conscious attempt to not redesign the tree, but to create the foliage pads in a way that would in three years become refined and easy to manage. Not glamorous work, but essential for creating mature looking trees, and that was the brief with this picea abies. 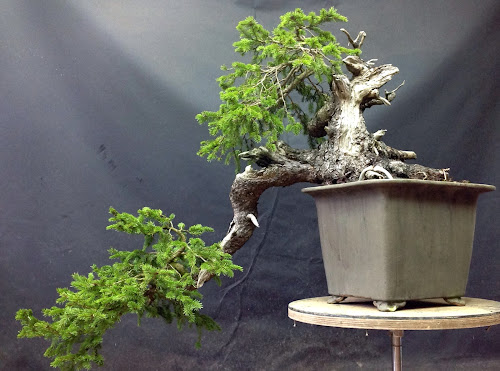 It had been styled a few times by the owner and had some major work done to it to bring branches down, apex up and back, but the final stages were proving elusive. How to bring maturity and a sustainable branching structure which would be pinched and pruned into becoming a developed tree. This is achieved by careful selection of branches and shoots, wiring where necessary and maximising the volume covered by the foliage in a natural way. This means no "tako-zukuri" or made like an octopus but rather using branches which move in a spruce like way, fairly straight, but give a sense of balance and perspective to the composition.
I won't go into the ins and the outs too much here because I only have another 20 minutes until we start to descend and to be honest, it takes too long and I notice that people prefer short blog posts, not the lengthy prosaic text which I have a tendency to write. What I will say is that the result came after a good day of listening to opera at high volumes and occasionally helping out with the repotting of some monster trees. 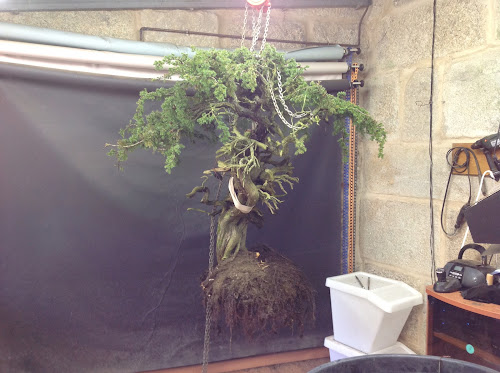 "And the monkey's getting grimmer, But his his eyes are on the ground, He's just hanging around..." 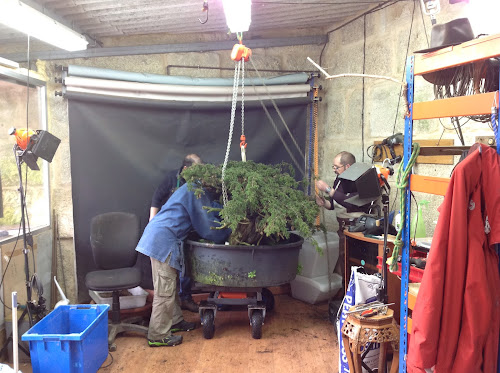 This is why I like medium sized trees. Reminds me of the Herniator, but that is another story...
Anyways, after a day of listening to opera and wiring, something which I haven't done in an age, the results were pleasing to the owner, and I must admit, I enjoyed it. 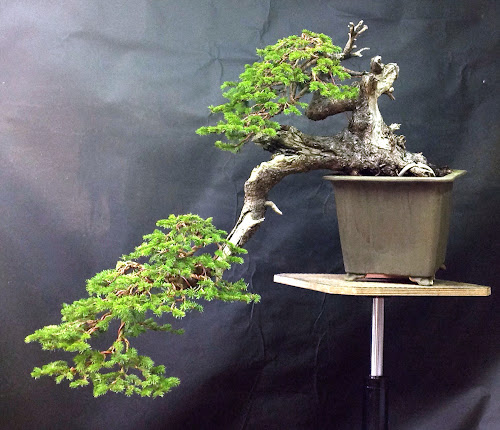 It is difficult to get the best angle and front, but for a tree of this size it is important that it isn't created with just one specific front and angle in mind, the two levels will be viewed almost independently, so height is a consideration. It is a big old tree. One thing that surprised the owner a little was the fact that I pulled up the apex of the second tree rather than squeezing it down, as he had been doing. When you have such a tree, with two very distinct sections, there needs to be some kind of connection between the two. With this tree, the cascading branch suffers a little from a lack of interest, the dead wood is poor in comparison to the gaping wound above it or the base of the trunk. As such our eye is unlikely to leave the interesting mid section and drop down to the lower section, so creating a large apex down there and attempting to bring it up a little was my solution.
All in all a very pleasant weekend passed and there are a few more posts about some trees to come, however I did develop a liking for the lyricism of Opera and found it pleasing to work with, however I felt a little like Morgan Freeman in the Shawshank Redemption...


I have no idea to this day what those two Italian ladies were singing about. Truth is, I don’t want to know. Some things are best left unsaid. I’d like to think they were singing about something so beautiful, it can’t expressed in words, and it makes your heart ache because of it. I tell you, those voices soared higher and farther than anybody in a great place dares to dream. It was like some beautiful bird flapped into our drab little cage and made those walls dissolve away, and for the briefest of moments, every last man felt free.

It has been a while since I sat down and styled out a tree, this was a rare and refined pleasure for me. Subtle changes which will hopefully take this tree to higher and farther places. The work required to take it there from here is just as difficult as the intial styling but requires less creativity and more logic, more observation and more dedication. I'm hoping the combination of my refinement knowledge and experience and the initial styling ability of the owner will create some impressive trees in the future.

Posted with Blogsy
Posted by Peter Warren at 21:51